Limited flexibility in the auction schedule for buying pipeline capacity has resulted in an opportunity to profit from the NBP’s premium this winter being lost.

Limited flexibility in the auction schedule for buying pipeline capacity has resulted in an opportunity to profit from the NBP’s premium this winter being lost.

The NBP January and February contracts held a premium to the TTF wider than 4.45p/th from early September until the start of this week. This was enough to cover the cost of buying short-term BBL capacity to the UK from the Netherlands and other fees, such as the commodity charges. 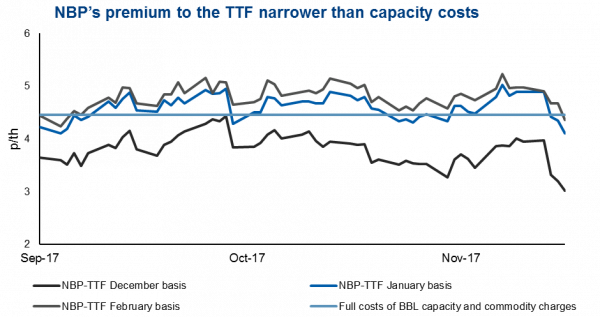 There were some small bookings of BBL first-quarter 2018 capacity at the most recent auction, despite the NBP-TTF March basis market being tighter than 4.45p/th.

Traders will have to wait until 18 December for European auctions of firm January capacity and until 15 January to make February bookings.

But that arbitrage opportunity has now been lost, at least for the time being. The NBP January and February contracts have tightened their premium to the TTF to less than 4.45p/th, offering little incentive to take up short-term capacity. The NBP-TTF February basis market had been as wide as 5.23p/th on 7 November.

Traders and pipeline operators should be frustrated at this wasted opportunity.

The BBL pipeline could have sold more capacity if new bookings could be made easily at any time. And traders would have more time to profit from the extrinsic value of taking up capacity if they make the bookings earlier, effectively allowing them to change their positions if prices change.

Some pipeline operators are already calling for more flexibility in the capacity allocation process and more innovative products. Interconnector UK has proposed a new capacity mechanism after it did not sell long-term capacity at an auction for bookings beyond October 2018, when most of its existing subscriptions expire.

The firm has called for more flexibility, including “shaped capacity purchases” to allow firms to subscribe based on the changes in flows.

There is little reason to take up annual capacity given that Interconnector deliveries are seasonal. The UK is a net exporter to the continent in the summer and a net importer for much of the winter.

Buying annual capacity to the UK from Zeebrugge would be largely useless in April-October, when the Interconnector is usually flowing towards the continent.

The expiry of long-term capacity bookings could contribute to greater gas price volatility, as well as a mismatch between forward prices before auctions and prompt markets at delivery.

System operators — including the Netherlands’ GTS — have recorded a shift towards more short-term capacity bookings.

Long-term subscriptions are largely considered a sunk cost. The Interconnector, which is fully subscribed until October 2018, flows towards the UK when the NBP is at a premium to Zeebrugge wider than the National Grid’s commodity charge — 1.8p/th this winter — which is the variable cost of using the pipeline.

Once the majority of that long-term capacity expires on 1 October 2018, what is considered a variable cost will change.

Ahead of each auction, the variable costs will be the price of capacity — expected to be about 2p/th in either direction — and the commodity charge.

NBP prices would need to be at a premium of about 3.8p/th to encourage booking capacity after 1 October.

But the components of the costs change immediately after the capacity is awarded. As soon as capacity is booked it becomes sunk, and that leaves the commodity charge as the only variable cost.

An NBP premium of 1.8p/th — assuming few changes to the commodity charge — would then still be enough to offer an incentive to use newly booked capacity.

This change is actually good for buyers of the pipeline capacity, despite the market they plan to deliver to narrowing its premium to the neighbouring hub.

The buyer will have hedged the capacity. In the case of the Interconnector, this will have involved buying the supply for the corresponding period at Zeebrugge and selling it at the NBP.

This would prevent the new capacity holder from losing out if the relevant basis market tightens. And there could be opportunities to profit further if differentials narrow.

The relevant basis market tightening beyond minus 1.8p/th would encourage unwinding the initial hedge and deciding not to flow through the Interconnector.

Going back to Interconnector UK’s original point, the tight auction schedule limits the opportunities to adjust positions in response to changing differentials.

The 18 December auction for firm January capacities is particularly stark. There will be very few working days after that for firms to change their January hedges.

The shift to more short-term bookings and the tight schedule could result in substantial changes in locational prices approaching delivery.

If a hub suddenly needs to buy more than expected at short notice, it would need to expand its premium to a neighbouring market rapidly to cover the cost of booking capacity.

But if a hub’s import demand is less than expected, differentials could narrow quickly.

For example, the NBP-TTF January basis market would expand beyond 4.45p/th if the UK expects to require BBL capacity bookings at the start of the year. But in the event that lower BBL flows end up being needed at delivery, the NBP-TTF day-ahead basis market would narrow to tighter than 2.1p/th — the combined UK and BBL commodity charges — to encourage unwinding the hedge made when the January capacity was booked.