And this is exactly what has been happening in the world of geopolitics recently, according to oil and gas major Total’s chief executive Patrick Pouyanne.

“The position of the US… opens the way for China to be more and more important in world business,” he told a packed room in London’s Chatham House last night.

He was responding to a question on how Total’s involvement in business projects in Iran is likely to be impacted should the US re-impose nuclear-related sanctions on Tehran.

An international agreement on Iran’s nuclear programme allowed Iran to rebuild crude exports last year and paved the way for foreign companies to return to its oil and gas sector. But US president Donald Trump said in October that the deal is no longer in the US national interest, and Congress now has until mid-December to decide whether to re-impose US sanctions. The EU has made clear that it would not replicate such a move.

A Total-led consortium was awarded a $4.88bn contract in July to develop phase 11 of the South Pars gas field in Iran. Total has a 50.1pc operating stake in the project, with China’s state-owned CNPC and Iran’s state-owned NIOC subsidiary Petropars taking 30pc and 19.9pc stakes, respectively.

“We have to do that in a legal framework, which is imposed by the US primary sanctions… which means that we do not use US dollars and do not have any US [citizens] involved,” Pouyanne says.

There are not many Americans at Total anyway, he notes. Furthermore, Total and its peers fund upstream developments with their own money, and “my equity is in euros”, Pouyanne says.

But Total would also like to get involved in a petrochemical project in Iran, and this would require project financing, a loan structure that mostly relies on cash flows from the project for repayments.

Thanks to western sanctions on Russia, Total discovered that China is able to provide project financing without US dollars, Pouyanne says, referring to the 16.5mn t/yr Yamal LNG project in Russia.

“We have been obliged to go to Chinese banks. They have plenty of euros,”  he says.

US and EU sanctions, imposed on Russia three years ago, complicated things for Yamal LNG project partners: Russia’s Novatek, Total and China’s CNPC and the Silk Road fund. Eventually, Yamal LNG, which is due to start up before year-end, was financed mainly by a combination of shareholder funding and loans from Russian and Chinese banks.

“Frankly, in Total, none of us had the idea to go to China to take project financing. We were forced to discover it” because of the situation, he says. “Project financing on Yamal was quite difficult… even to educate the Chinese banking system about what project financing means, how you structure it… But at the end of the day, we discovered it is possible to finance a project without using dollars.”

Despite the risk of the US re-imposing sanctions on Iran and impacting Total’s business activities there, Pouyanne sees the glass as half full, rather than half empty.

“Thanks to all this process initiated by President Trump, it will in fact give us more clarity on what the framework is,” he says. And while Total is prepared to walk away if it becomes legally impossible for the firm to operate in Iran, Pouyanne says he is optimistic a solution will be found.

“Whatever happens, I am convinced the Iranians will remember that we were bold enough to sign this contract,” he says. “In this business, loyalty is very important historically.”

“We do not decide where we find oil and gas… It is very concentrated, [as] 80pc of the oil and gas resources are only in eight countries,” Pouyanne says. “[For a major company like Total], if you decide not to go to all the risky places of the world, you stay in the US. But I am not in the US. And even in the US you have some risks.”

Pouyanne also insists that Total makes its commercial decisions by itself, rather than taking cues from the French government. But he says that Total is perceived in most countries as representing France, a permanent member of the UN Security Council.

“When people ask me ‘do you have a nationality?’ I say ‘Yes. Total has a nationality’, and this French nationality is a strength in this world of oil and gas business,” Pouyanne says. 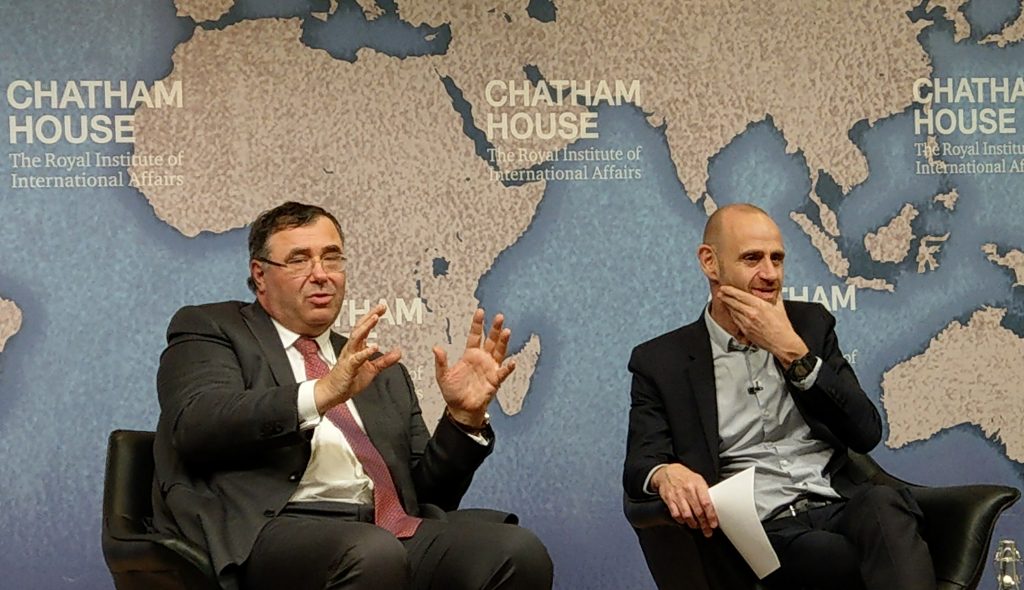