European near-curve prices rallied in November despite early indications that there will be more gas left in storage at the end of the winter than in most recent years.

European near-curve prices rallied in November despite early indications that there will be more gas left in storage at the end of the winter than in most recent years.

Cold weather in November, and forecasts for it to extend into December, supported TTF contracts for delivery over the remainder of the winter. And the firmer gas prices are especially evident when comparing gas with coal — its main competition — as the TTF day-ahead market has climbed to levels that would make even the highest efficiency plants uncompetitive.

The TTF day-ahead market had stayed close to levels that would make a 55pc-efficient gas-fired plant competitive with the Netherlands’ oldest 40pc-efficient coal-fired units in the summer and early October. 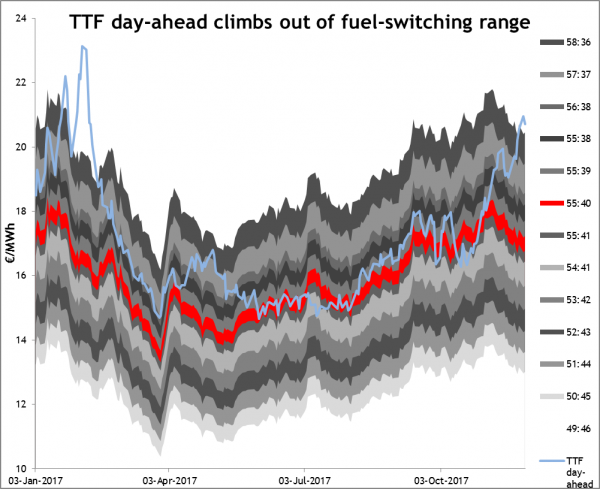 Coal displacing gas from the generation mix could help preserve stocks for later in the winter, if northwest Europe needs to deal with persistently cold weather.

But the signs are that the region will be left with above-average stocks by 1 April, if temperatures are close to the seasonal norm.

The stockdraw in Germany, France and the Netherlands — excluding Norg, which is used to shape production from the Groningen field — has been lower than last winter.

And mild weather in October was only part of the reason. Temperatures in Amsterdam, Essen and Paris were above the seasonal norm on 1 October-27 November having been below average a year earlier, even with cold weather this month.

But withdrawals in Germany have been lower even during periods when heating degree days — using 15.5°C as the base — have been similar to last winter. 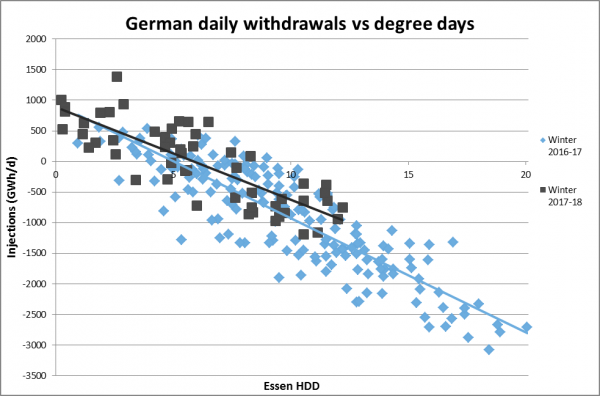 And the trend in France has shifted even further towards a drop in weather-adjusted withdrawals, partly because of low stocks following a decrease in storage bookings. 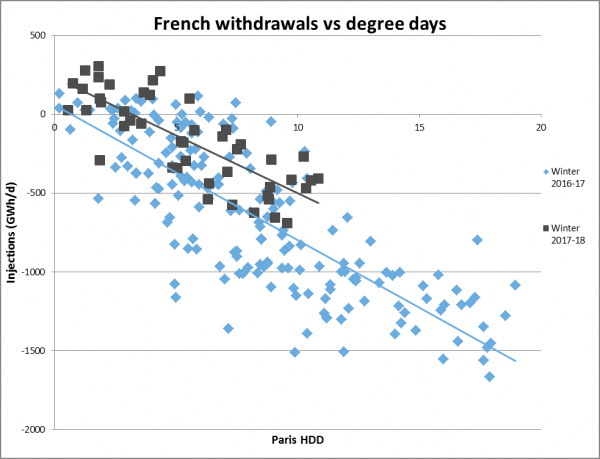 The exception has been the Netherlands, where withdrawals have been quick despite temperatures in Amsterdam being further above the seasonal norm than in Essen or Paris. 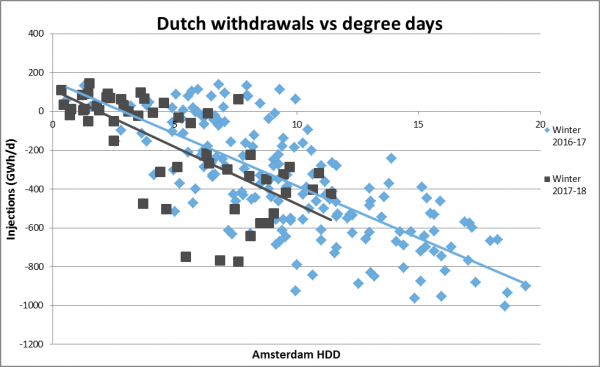 Lower Groningen production for sale — including Norg stock movements — because of the field’s cap being reduced this gas year and the decline of the small fields has contributed to the strong stockdraw.

While Groningen production data are not yet available for November, Norg withdrawals were slow last month.

French, German and Dutch stocks — excluding Norg — will be above average at the start of April if the correlation between temperatures and withdrawals is maintained, assuming weather close to the seasonal average.

Inventories would be higher than in two of the previous three years but still well below the highs on 1 April 2016, which was following a particularly mild winter. 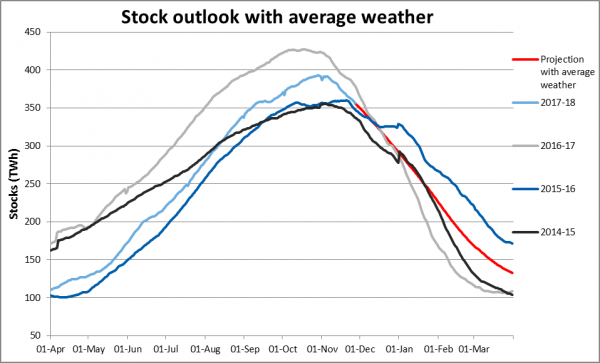 And this would also require a shift to drawing on French and German storage, rather than maintaining quick Dutch withdrawals.

Dutch sites would be almost completely empty by 1 April even with temperatures in line with the seasonal norm, based on the trend so far this winter. And facilities would be empty by 18 March if temperatures are 1°C below average. 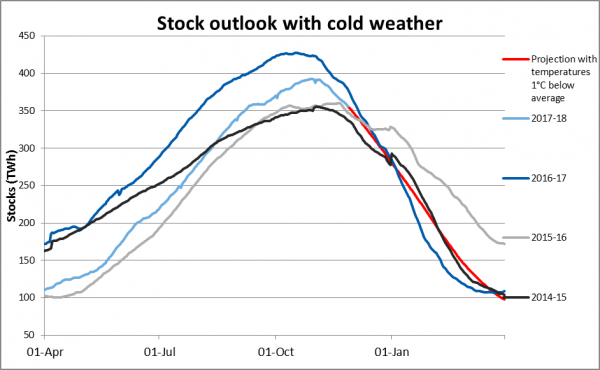 The decrease in withdrawals has largely been driven by lower exports from the region, particularly to the UK. And the UK’s demand for gas from the continent has fallen, even when adjusted for the weather. 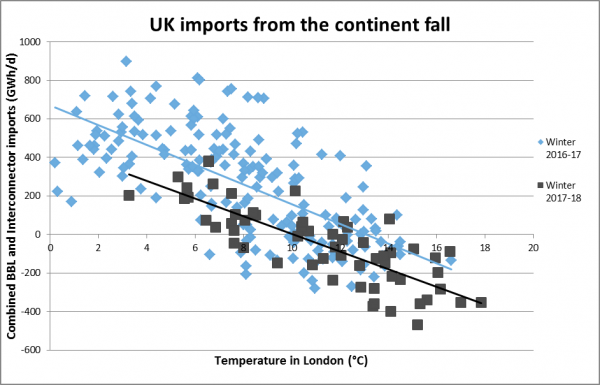 Much of this has been driven by some of the factors highlighted in the Argus winter outlooks. Lower UK power sector gas demand, higher domestic production and strong Norwegian exports have resulted in the UK only requiring imports through the BBL and Interconnector when cold weather has boosted demand. This has been the case even with slow UK LNG imports.

And strong Russian exports have also eased the draw on German storage, with the Argus winter outlook pointing to the possibility of above-average stocks on 1 April, if temperatures are close to the seasonal norm.

And there could be some factors that further curb weather-adjusted withdrawals later in the winter. French nuclear capacity has started rising following extended constraints, while German power sector gas demand could be lower, especially with gas falling further behind coal in the merit order.