There are longer-term factors to take away from the rapid rise in European natural gas prices during a recent cold snap.

This blog will focus on topics to be covered in the upcoming Argus European Natural Gas webinar for the first quarter of 2018. Invitations to the webinar will be sent to subscribers soon.

The rapid rise in UK NBP and Dutch TTF natural gas prompt prices during the cold snap has grabbed headlines. But the lack of supply flexibility this week has taken all winter to create.

The immediate focus will inevitably shift to the unplanned constraints and cold weather that have been the proximate cause of the price spike. Kollsnes restrictions, the BBL pipeline halting and lower UK gas production have all played their part.

But there are more important longer-term factors to take away from this week. 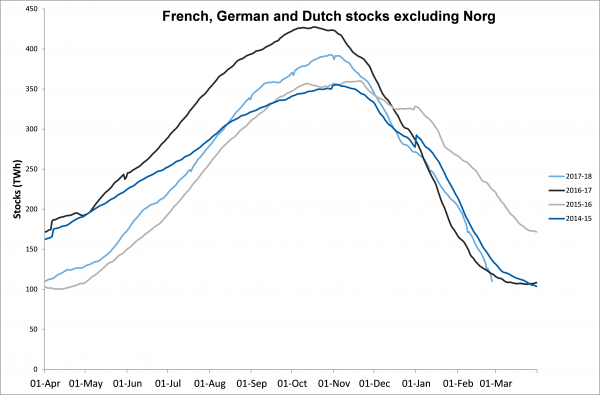 Inventories have depleted, despite mild weather for much of winter, with sites in some countries — including France and the Netherlands — on course to be empty before 1 April, even before the recent cold snap.

There have been just over 1,500 Dutch heating degree days so far this winter — taking into account today’s forecast — close to the five-year October-February average of 1,512. But most recent winters have been mild and the 10-year average for the period is almost 1,600.

A cold winter would make it much more difficult to meet consumption without raising imports, which could require competing with global premium markets for LNG more regularly.

Withdrawals this winter and in 2016-17 have been particularly strong compared with previous years, once adjusting for temperatures.

Lower Groningen production and weak LNG imports have increased the use of storage to meet demand, even with record Russian exports.

Stocks would be close to 50TWh today with degree days more in line with the cold 2012-13 winter and given the correlation between temperatures and withdrawals in October 2017-February 2018.

In that event, northwest Europe may have had to compete for LNG earlier on in winter to prevent storage from being emptied before the end of March.

And the region’s dependence on imports is on track to rise, given the decline of Dutch small fields and plans for lower Groningen caps.

Dutch LNG sendout’s small reaction to TTF prompt markets firming has been a major contributor to the lack of a price ceiling. 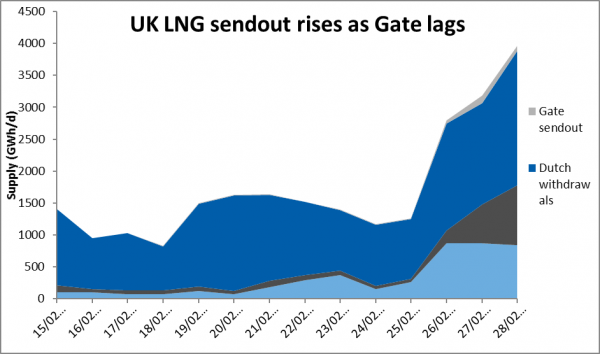 In previous periods of a tight supply and demand balance — such as December 2017 or March-April 2013 — NBP and TTF prompt markets rose to northeast Asian LNG prices. This encouraged higher sendout from UK LNG terminals, and buying a cargo to replace the inventories that were regasified. 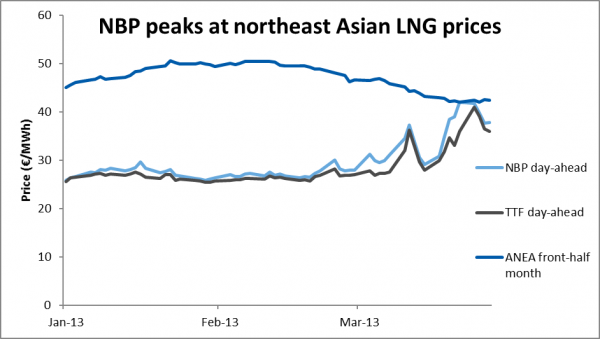 In 2013, the higher LNG sendout was supported by Dutch production remaining high throughout the late-winter cold snap. Groningen output for sale — including Norg stock movements — was 217mn m³/d in March 2013, before annual caps were implemented. It was just 77mn m³/d in March last year and may have to be even lower next month, given that the cap is lower this gas year than in 2016-17.

But the Netherlands still has supply flexibility that it was not using at the start of today’s gas day. The Gate terminal has plenty of stocks and regasification capacity to provide more supply. But TTF prompt markets have climbed well beyond northeast Asian LNG prices, because of the limited increase in sendout. 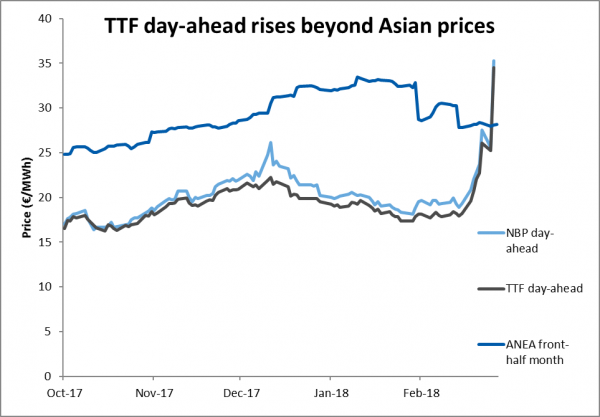 There are cargoes near Gate that could be brought in, particularly from Russia’s Yamal facility. But the tankers carrying Russian LNG have mostly performed transshipments, rather than unloading at Gate, despite potentially lucrative returns from supplying the Dutch market in the short term.