Oil prices increased so European gas prices are up — that is the usual story.

Except crude markets have not been the main driver behind the recent rally of NBP and TTF forward prices, at least not directly.

Coal swaps have led prompt prices higher — as shown in yesterday’s blog — and this is also the case for forward contracts.

The NBP first-quarter 2019 market has largely followed the UK fuel-switching price, based on a 55pc-efficient gas-fired plant and a 39pc-efficient coal-fired unit. 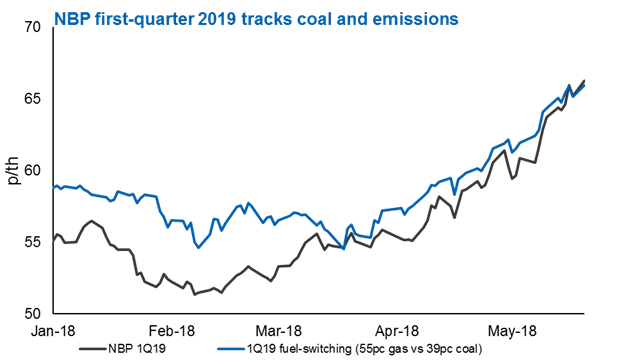 This combination of coal and emissions prices has driven gas forward markets on more days than the cost of oil-indexed gas.

While this is only a small difference, the TTF first-quarter 2019 market moved with continental fuel-switching levels on 36 occasions and just 23 with euro-denominated North Sea Dated prices.

And taking every trading day since 1 November, the percentage change in the NBP first-quarter 2019 market has been most similar to the change in fuel switching 81 times and North Sea Dated just 56.

This shows that crude prices still have a significant influence on gas hubs, even if the fuel-switching range is setting the main support levels for NBP and TTF prompt and forward markets.

The traditional mechanism for oil driving gas markets has largely disappeared. The International Gas Union found that only 9pc of contracts in northwest Europe were linked to oil prices in 2016.

Instead of the obsolete story that higher crude prices filter into northwest Europe’s import costs, there are other mechanisms at work.

Oil prices have been a driver of coal markets because diesel can comprise up to 40pc of operating and inland transportation costs. The recent rally has contributed to pushing up the European fuel-switching range.

And the integration of the European gas market combined with a drop in Dutch production has made the northwest more dependent on other regions, particularly Iberia, where there is still substantial oil indexation.

Links to crude prices in the LNG market can also filter through to European hubs. The decline of Dutch production could result in more demand for LNG, at least during cold spells or severe supply disruption.

Firmer crude markets driving global LNG prices up increases the potential upside risk at European hubs if the region has to once again compete for cargoes.

The UK fuel-switching price is typically the first soft price ceiling European hubs hit if the supply-demand balance is tight. But prompt prices can rapidly jump towards Middle East and northeast Asian LNG prices if the UK’s switch to coal from gas for power generation is not enough to help the region balance. 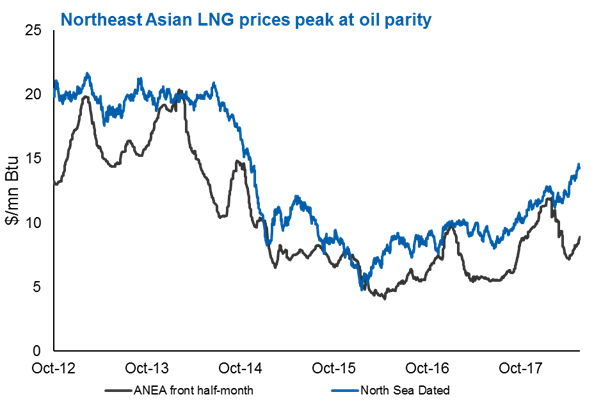