Pressure on the UK government to support gas storage sites has eased as memories of the record winter price spike fade.

The Department for Business, Energy and Industrial Strategy (Beis) is right to rebuff calls from industry and storage firms for an inquiry, following NBP prompt prices climbing after National Grid’s rare deficit warning.

The UK system eventually balanced during the coldest day since 1987, even as multiple supply disruptions curtailed domestic production and Norwegian exports.

And there are potentially cheaper measures, such as more balancing products, to cope with another similar cold spell.

Criticism has centred on a supposed new vulnerability following the closure of Rough as a storage facility, leaving the UK with no long-range storage.

Beis greenlighted its shutdown as the UK could call on supplies from Norway, Qatar and the continent to meet demand.

And the UK comfortably passes N-1 tests — a measure of whether a country can meet peak demand without its largest piece of supply infrastructure — even following the closure of Rough.

But the Gas Security Lobby Group rejects the government’s analysis and wants Beis to reconsider whether the UK needs a minimum amount of storage, similar to France’s stock requirement for firms supplying protected customers or Italy’s strategic reserve.

And subsidies to prop up existing sites and spur investment in new ones is another demand.

But Beis shares little of this urgency, rejecting calls for an inquiry.

Rough being available would have made little difference on 1 March, it has said, when gas demand hit a seven-year high of 417mn m³. The system balanced without cutting off gas to industrial users or households. And market forces should determine whether new storage sites are built, it said. 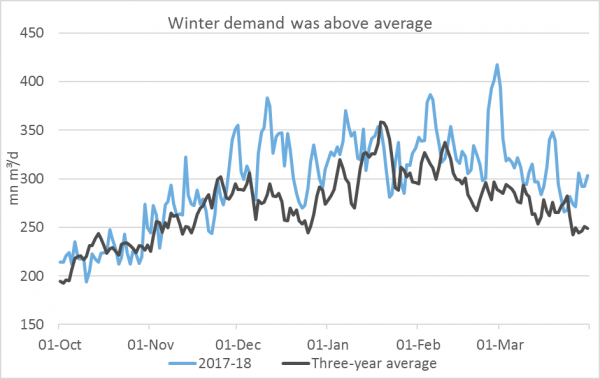 Beis is correct to say that Rough still operating as a storage facility would have made little difference. The struggle to meet demand in northwest Europe during the cold snap was not because of a lack of storage but the limited availability of gas.

Sites in Germany, the Netherlands and France had not filled at the start of last winter. Had Rough been available, there would have been more gas in UK storage but continental stocks would have been lower by a similar amount. 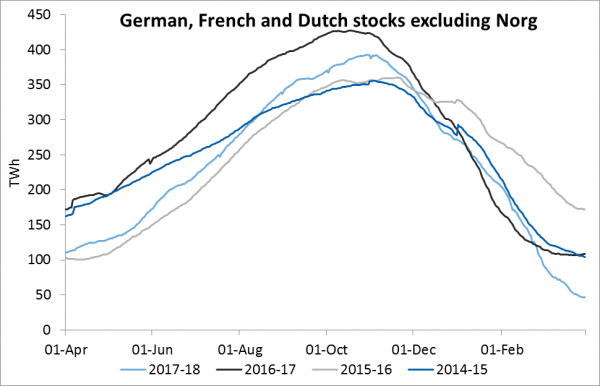 And part of the reason there is little incentive to build new UK storage is the abundance of capacity elsewhere in northwest Europe.

Even if a Beis inquiry found the UK needing extra storage, there would still be no relief until the early 2020s.

A candidate like the 1.5bn m³ long-range Gateway in the east Irish Sea would take at least 3-4 years to build.

But some UK capacity expansions are advancing without subsidy, which will raise deliverability. Stublach is scheduled to expand by 100mn m³ to 300mn m³. And the government is helping in other ways, such as at the 500mn m³ Islandmagee project, where it is cutting borrowing costs by underwriting most of the debt.

And storage operators have so far not closed much capacity — in the UK or the continent — despite tight summer-winter spreads pressuring margins.

SSE has been trialling more innovative storage products at its Aldbrough and Hornsea sites to boost revenues.

Falling gas demand in recent years with more insulation and greater efficiency helped the UK meet the winter demand spike, although production is also expected to go into decline in the coming years.

Overnight temperatures were just below -5°C on 1 March — only the 15th coldest day in the capital since 2000. But National Grid’s composite weather variable, which measures wind chill among other factors, found it to be the coldest day nationally in 30 years.

The UK’s small storage capacity came to the fore as domestic production has fallen sharply since 2000, although the decline halted in the past few years with a small increase in output.

And stocks are low across northwest Europe, where the decline in production has accelerated in recent years.

Dutch production from the giant Groningen field has been slashed because of earthquakes and the small fields are in decline. Northwest Europe will not fill its storage capacity this summer, unless there is a substantial influx of LNG or Russia smashes its export record.

Low stocks heading into next winter raises the possibility of more hub price spikes, which can be politically difficult.

UK energy costs have risen into the middle of the pack in the EU-28, from closer to the bottom in the last decade.

The government could have alternative measures to ensure balancing the system, such as expanding its demand-side response. National Grid scaling back deliveries to firms that had bought off-peak capacity on 1 March helped balance the system and end the gas deficit warning.

National Grid was able to reduce demand by 52mn m³/d in 2005 — equivalent to 21pc of average daily demand at the time — using interruptible contracts to cut off supply to industrial users and power stations.

But these contracts became unavailable in 2011.

The UK could give itself a bigger buffer in cold snaps to come by following the lead of Germany, which has introduced new balancing products such as the demand-side management and long-term options.