These have been heady days for anyone who follows the EU’s emissions trading system (ETS), the largest cap-and-trade carbon market in the world.

After plummeting to nearly irrelevant levels in the wake of the 2008 financial crisis, the price of a permit to emit one tonne of CO2 has risen by roughly 150pc since the start of the year. Owners of power stations or industrial sites now have to pay nearly €20 for every tonne of CO2 they emit — a hefty portion of overall costs.

In theory, that would be a success for environmentalists and anyone who hopes that higher carbon costs for polluting industries might force them to switch to cleaner technologies, as they might do by pivoting away from coal-fired electricity and towards generation from natural gas, which emits around half the CO2 of coal.

In the power sector, which produces the largest share of emissions covered by Europe’s carbon market, coal-fired plants have roared back to life. Last month, even as prices in the EU ETS increased to 10-year highs combined coal burn in Germany, Spain, France, and the UK exceeded gas-fired generation for the first time in nearly three years.

In the UK, which has had some of the greatest success in reducing coal output in the last decade, September coal burn this year easily surpassed September coal burn last year, putting total emissions on track to increase for the first time in six years.

So why are emissions increasing, when the cost of emitting CO2 is higher than it has been for years?

And in a strange twist, gas prices have been pushed higher by the ETS itself. Because of a series of events earlier this year — notably the ‘Beast from the East’ cold weather blast from Siberia in March that boosted heating demand in Europe — levels of gas storage in Europe were left at years-long lows heading into summer. Ever since, storage capacity holders have been aiming to maximise injections in preparation for this winter, rather than burn gas for power now.

As a result, when higher carbon costs push up the cost of operating coal plants, the price of gas must rise too, so that gas plants remain uncompetitive with coal and more gas can go into storage.

To understand how expensive the cost of coal-fired power is compared with gas-fired power, energy specialists examine what are called “clean dark spreads” and “clean spark spreads.” A measure of coal plant profitability, clean dark spreads are a straightforward calculation consisting of a coal plant’s revenues (in other words, the current price that can be obtained from selling its electricity), minus its costs (the price of coal plus the price of carbon permits). Clean spark spreads are much the same for gas plants, except costs include the price of gas rather than coal. 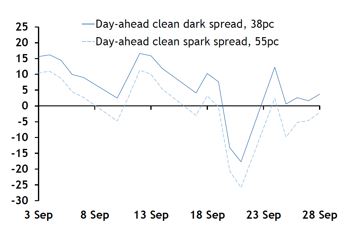 The effect on the power mix in these countries is already noticeable. When power generation from renewable sources increases, it is gas — not coal — that is pushed off the grid.

Germany’s combined wind and solar power output was 3.4GW higher last month, compared with September 2017. But the increase in renewable generation did not affect coal-fired output, which averaged nearly 7GW in both years. Rather, it made a sizable dent in gas output, which roughly halved on the year to 1.8GW last month, down from 3.4GW in September 2017.

That was last month. If the current market forecasts for clean dark and spark spreads for November and December are any indication, the resurgence of coal-fired generation and emissions is likely to continue.

For supporters of lower emissions, the news is not all bad. Casting further ahead, to 2020, gas plants are beginning to look competitive with coal in countries like Germany. German clean spark spreads for 2020 had languished below clean dark spreads throughout this year — until last month, when gas plants finally climbed above coal in the merit order. They have danced around one another since.

Higher carbon prices might not have squeezed out coal plants so far this year, but with gas plants challenging coal plants by 2020, owners will think twice about locking in coal burn for the years ahead. Utilities hedge power sales in advance, based on current clean dark and spark spreads, and they might choose to lock in lower-carbon power generation now, for 2020 and beyond.

Higher EU ETS allowance prices — if sustained — can also influence investment decisions that will have a long-term impact on reducing emissions, such as encouraging firms to build new wind and solar facilities, which pay no carbon costs at all. And for companies that own fossil fuel-fired power and industrial plants, higher carbon prices can provide an incentive to investment technologies to cut emissions.

Emissions in the EU's power sector this year might have risen, but in the long term the effects of high prices in the ETS are still likely to compel lower emissions.