In this blog post, the first of a five-part series examining a range of IMO 2020 issues, we look into how shipowners, refiners, ports and bunker suppliers are preparing for the change and how we think the transition might play out. 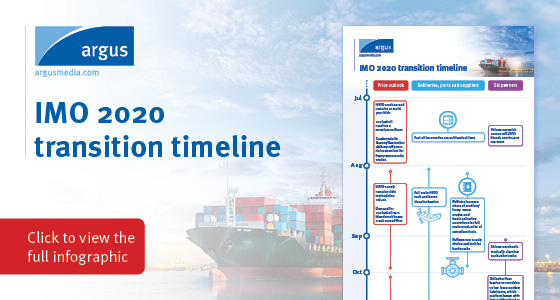 The race is on

For anyone wondering when we will start to see the long-awaited and much-discussed impact of IMO 2020, the answer is, we already are.

Reduced supply of HSFO has kept crack spreads tight and we expect this to persist throughout the third quarter and potentially well into the fourth, should HSFO supply become even more scarce before the end of this year. 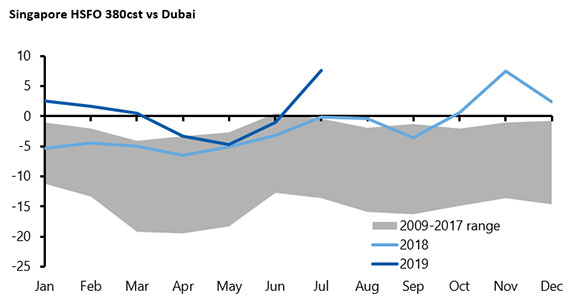 A clear sign that demand for low-sulphur blendstocks is rising is the strength of the1pc fuel oil refining margin. The northwest Europe 1pc fuel oil crack spread to North Sea Dated crude averaged a premium of 40¢/bl in July, the highest monthly average in more than 20 years. 1pc fuel oil is expected to be a popular blend component of 0.5pc fuel oil (VLSFO) blends. 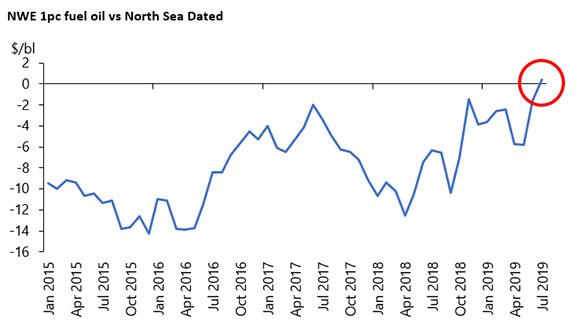 Production of IMO 2020-compliant fuels may not be in full swing everywhere, but several refiners have already made crude slate and operational changes to begin producing VLSFO.

Some shipowners have been testing these blends in order to understand any operational challenges they will face, but not all have had access to test blends.

The next few months are a crucial period for anyone exposed to IMO 2020 changes. Expect preparations to step up a gear between now and the end of this year.

Refiners will ramp up production of compliant bunker fuels, marine gasoil (MGO) and VLSFO. Some refiners have already produced batches of products, but they’ve not been at volumes that fully test their supply chains. From August onwards, we expect refiners to begin making the changes in operations to produce low-sulphur bunker components at scale. As this advances they will be testing their supply chains to look for bottlenecks through the fourth quarter.

Once refinery supply picks up, bunker suppliers will increase storage of low-sulphur bunker fuels. This will require more HSFO tanks to be cleaned out. In planning for this, suppliers will need to decide how much HSFO tankage to keep available. Too little and shipowners with scrubbers will find it hard to source material, too much and they will miss out of a greater volume of higher-value bunker sales. We expect suppliers and storage operators to lean towards the first option. It is safer to over-clean and dirty up a tank later once the relative demand for each product becomes more established. But this could exacerbate the current HSFO supply tightness, supporting values for longer.

Shipowners will be the last of the market to make the move. Over the next few months they will begin steadily cleaning out their bunker tanks, one at a time. Large commercial vessels have segregated tanks that allow them to avoid comingling bunkers from different suppliers.

This phased cleaning and bunkering process is a tricky balance. If they leave it too late and haven’t burnt all HSFO onboard by the end of the year, they may risk having to de-bunker, which would be a financial and logistical headache. But equally they want to ensure that they can continue burning HSFO until the end of this year. How long they push it will come down to the risk appetite of each individual shipowner. But suffice to say, their operations departments will be busy.

Refiners will do what they can to reduce HSFO production, but in many cases, this is simply not possible. So as shipowners stop using HSFO and supply begins to exceed demand, there will be a downward price reaction. We expect the differential between HSFO and 0.5pc fuel oil to begin widening in the fourth quarter.

From 1 January, all vessels without a scrubber onboard should be burning 0.5pc bunker fuels. This will almost certainly not be the case. There will be valid for reasons for this, but there will also be deliberate non-compliance.

The IMO has issued guidance for ports and shipowners on how to deal with the situation where a compliant fuel is simply not available. These fuel non-availability reports (FONARs) will allow a shipowner to burn HSFO if they can prove they tried and failed to secure a compliant fuel.

We expect the price spread between HSFO and compliant fuels to be widest during the first few months of implementation, potentially more than $300/t. This spread is based on our analysis that shows there will be about 800,000 b/d (45mn t) of excess residue in 2020, about a quarter of previous HSFO bunker demand. This will need to be priced low enough to be adopted in alternative markets, predominantly power generation. Scrubbing, non-compliance, refinery optimisation, a lighter global crude slate and blending into low-sulphur bunkers will collectively reduce the surplus, but they won’t be enough to eliminate it entirely. 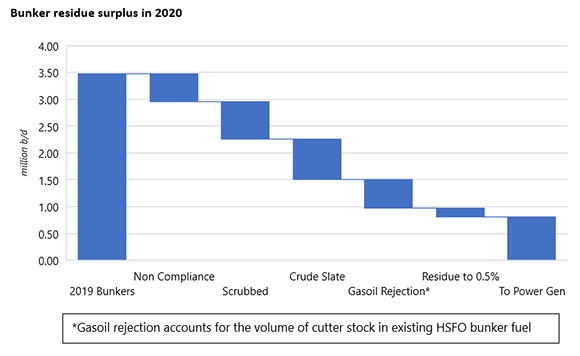 This is the period where the incentive to flout the rules will be greatest. Major shipowners will all comply — it would be reputational suicide not to. But for smaller operators, with vessels operating in areas harder to police, there will be situations where they will be able to obtain and burn HSFO without getting caught. The degree of non-compliance in the early period could have an impact on price spreads.

Scrubbing, FONARs and outright evasion aside, all other vessels will be burning either 0.5pc MGO or a VLSFO product.

As MGO is a 100pc distillate product, it is expected to be more expensive than VLSFO. Shipowners would therefore prefer to burn VLSFO, and in most cases refiners want to produce it too as it provides an outlet — however small — for residue. But because of concerns about the stability and compatibility of the blends — which we will discuss in more detail in part two of this series — particularly in the early days when most shipowners are seeing specifications for the first time, we’re forecasting higher demand for MGO initially. Although, if the discount to MGO for VLSFO is sufficiently attractive, shipowners will be more willing to give it a go.

As 2020 progresses, vessels with scrubbers installed will continue to hit the water, refiners and blenders will tweak their recipes bringing in as much residue as possible, and shipowners will gain more experience in handling these new fuels. As a result, we expect the VLSFO-HSFO differential to narrow from the first quarter peak, but we still see it above $200/t. If spreads do materialise at these levels, we expect shipowners to return to the scrubber market. Scrubber orders have cooled over the past six months as shipowners have decided to wait and see how things pan out.

By the middle of 2020, the market will have overcome the sulphur-switch teething problems. The variety of VLSFO blends will have been rationalised following market feedback. Shipowners will still have to remain vigilant in managing fuels to avoid incompatibility issues. Our outlook beyond 2020, including when the market might return to equilibrium, will be covered in the final part of this blog series.

While we may know what needs to happen and by when, it almost certainly won’t play out exactly as described above. There are too many moving parts and conflicting agendas. Whatever happens, we will be following it all closely.

For the latest news, insight and market activity related to the IMO’s 0.5% sulphur cap,you can sign up for our free bi-weekly newsletter.