Welcome to the first installment of our monthly blog: The US Crude Export Chronicles by Argus senior reporters Eunice Bridges (@eunicebridges12) and Amanda Hilow (@HilowMidpoint). Come back every month for Argus’ take on US crude oil exports and how they are transforming global markets.

The crude market has been laser-focused on new pipelines in the Permian basin for quite some time as new takeaway there can provide a vital conduit for light crude to the US Gulf coast. On that front, there is big news this week.

Plains All American Pipeline started service on the 670,000 b/d Cactus 2 line from Wink, Texas, to Ingleside near Corpus Christi. Plains has not said how much crude is moving on the system during its first few days of service. But the linefill has already caused crude prices at Midland to rise on expectations that the additional capacity will clear a previous bottleneck in the region.

Permian WTI averaged a 76¢/bl discount to the Nymex light sweet crude futures contract during the July and August US trade months, significantly narrowing from the average $3.09/bl discount to the benchmark set in the prior two-month period.

That discount may narrow even further in the coming months as the line ramps up flows. Plains expects Cactus 2 to reach full service in the first quarter of 2020, slightly earlier than a previous estimate of April 2020.

On the heels of the Cactus 2 news, Epic Midstream has also started its 400,000 b/d crude line from the Permian to Corpus Christi. And Phillips 66's 900,000 b/d Gray Oak line is set to come on line later this year.

The latest trade data from the US Census showed a record high 3.16mn b/d of US crude exports in June, continuing an upward trend. 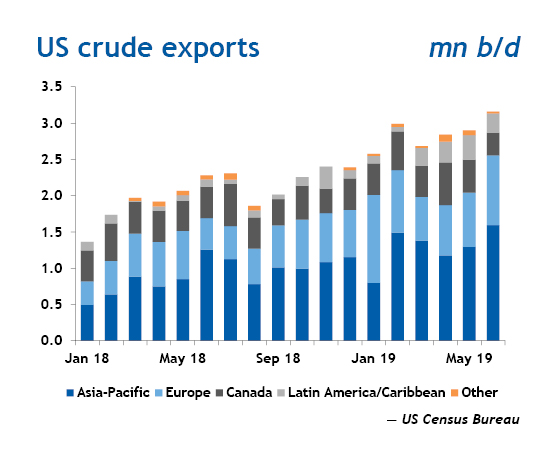 But the biggest surprise is South Korea moving to the top of the importer list to lift 605,000 b/d of US crude — nearly double the amount sent to US neighbor and trade partner Canada. South Korea has been in the top spot before, but the large June quantity is revealing. South Korea averaged significantly lower volumes of about 352,000 b/d of US crude imports from January-May of this year.

South Korea is rapidly reducing its reliance on Middle East energy imports as it pivots to the US, easing trade tensions with Washington while diversifying its supply lines at a time of increasing strife in the Mideast Gulf.

Refiner SK Innovation has taken the lead in US crude purchases, bringing an increasing volume of US light sweet crudes — including new Permian stream West Texas Light (WTL) — to Ulsan, South Korea, for its 870,000 b/d refinery there.

Midstream companies are racing to build and expand pipelines and export terminals to meet rising demand for US crude.

Buckeye Partners doubled the amount of crude storage initially planned for its new marine terminal in Corpus Christi. The terminal — known as South Texas Gateway — is now set to open next year with 7mn bl of storage. Buckeye said it will be able to load very large crude carriers (VLCC) with about 1.5mn bl after the planned completion of the Corpus Christi Ship Channel Improvement Project.

Enterprise Products, a major oil exporter, is expecting US crude exports to rise to more than 8mn b/d in the next few years. The company is doubling down on that prediction by building another long-haul crude pipeline from the Permian basin to Houston, Texas, and recently reached a final investment decision on a Texas offshore oil port after signing agreements with Chevron, a top Permian producer.

Energy Transfer may also jump into the VLCC race. The company is negotiating with potential shippers on a project to load VLCCs connected to its terminal in Nederland, Texas.

Permian crude exports are expected to grow by at least another 400,000 b/d by the end of August with the start of these new pipeline projects. The rising export demand is supporting prices in US domestic markets while simultaneously leading to a surplus of light sweet crude in the global waterborne market. Key export crude WTI has been displacing pricier alternatives from the North Sea such as Forties and other Brent component grades, as well as competing lights such as CPC Blend.

WTI fob Houston more than doubled its discount to the international Ice Brent benchmark from the July trade month to the August US trade month because of the higher supplies, widening from an average 82¢/bl discount to the European market to an average $1.92/bl discount last month. The downward trend is likely to continue throughout the US infrastructure buildout — but that trend could reverse when IMO 2020 regulations take effect in January, potentially boosting global demand for light sweet.

Thanks for reading our first monthly analysis. If you want more on this topic, please check out our podcast episode about the US Gulf coast crude network. Feel free to share the blog and the podcast. Smooth sailing.

The US Gulf coast crude network: Opening the floodgates