Most of the 200mn t/yr high-sulphur fuel oil (HSFO) bunker fuel market will shortly be replaced by low-sulphur alternatives. As discussed in the first blog post in this series, we think marine gasoil (MGO) will account for a large share of the demand early on. The remainder will be made up of very-low sulphur fuel oil (VLSFO) blends, a largely unknown entity in the bunker market.

In this post, part two of our five-part series on IMO 2020, we take a look at what VLSFO blends may look like next year, what the main components will be, where they will be produced and what compatibility issues may arise.

The primary blend component in high-sulphur bunker fuel — HSFO 380cst — is high-sulphur residue. This is blended with a number of different cutters of varying sulphur and viscosity to create an on-specification product. As it is the main component of the blend, it has the largest impact on the product’s quality. With IMO 2020 essentially removing the use of high-sulphur residue in any meaningful volume, the component or components that take its place will similarly dictate the quality of the finished product.

In broad terms, there is expected to be two streams that will make up the majority of the new blends. These are very-low sulphur residue and vacuum gasoil (VGO), and they will create two quite different blends. 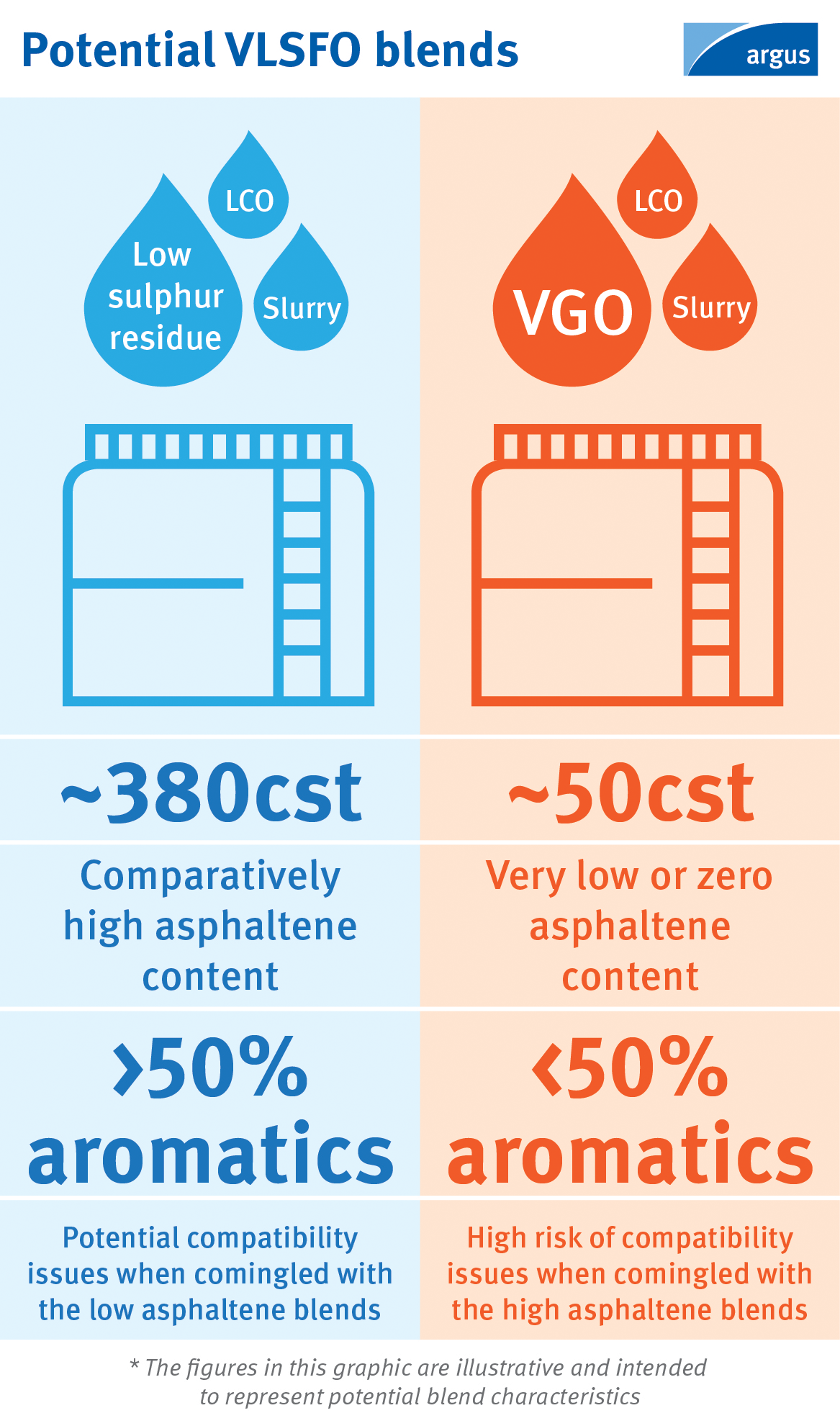 These blends will most closely resemble existing high-sulphur bunkers. Very-low sulphur residue will be produced predominantly by processing very-low sulphur crudes. This is the easiest option for refiners, but as there is simply not enough low-sulphur crude to go around, not all refiners will be able to go down this route. Medium and heavy crudes yield more residue than light crudes, but as shown in the chart below, global production of medium and heavy sweet crude represents just 13pc of total output.

Most of these crudes come from just three regions — north Africa, southeast Asia and west Africa. Refiners that are concerned about the sulphur content of their residue may elect to change their crude slate by increasing the share of sweet crude, so we expect competition for these grades to heat up in the coming months. 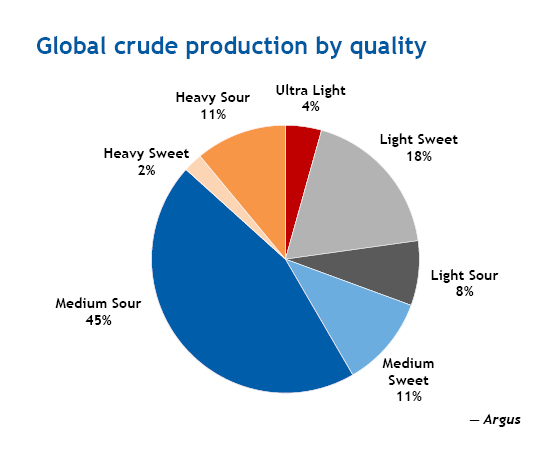 Another way to produce very-low sulphur residue is through atmospheric and vacuum residue desulphurisation. But atmospheric (ARDS) unit or vacuum residue desulphurisation units (VRDS) are expensive pieces of kit, and are not commonplace in refineries today. Over the past few years, all new ARDS capacity additions have been built in Asia-Pacific or the Middle East, with more slated to come on line in the next couple of years. But many of these projects also include residue destruction capacity which limits their potential contribution to the bunker pool in 2020 and beyond.

This residue is very-low sulphur, but the desulphurisation process reduces its aromaticity. This could lead to compatibility problems when blending with high-aromatic products, straight run or cracked residue that have a notable asphaltene content.

Asphaltenes are found in residues, and as these new blends will contain little or no residue, the asphaltene content will also be low. One of the main components of these blends is likely to be VGO. VGO is most commonly processed in a fluid catalytic cracker (FCC) to produce gasoline, among other light and middle distillate products. From a blending perspective, mixing highly aromatic components into these blends will need to be handled carefully because it could create an unstable blend that will sludge.

Diverting hydrotreated VGO away from the FCC to create low-sulphur bunker fuel will come at the expense of gasoline production. In order to incentivise refineries to adopt this change in operation, it needs to be more profitable for them to blend VGO rather than to crack it.

The decision to forgo gasoline production will put pressure on the markets for key transport fuels. In order to replace these losses and meet demand, refineries that make the operational change may need to increase crude runs. For the same reason, we expect this change will be more likely to take place in regions that have an excess supply of gasoline. Seasonal demand variations for gasoline will also play a part — more VGO may be made available for blending outside of the summer driving season. 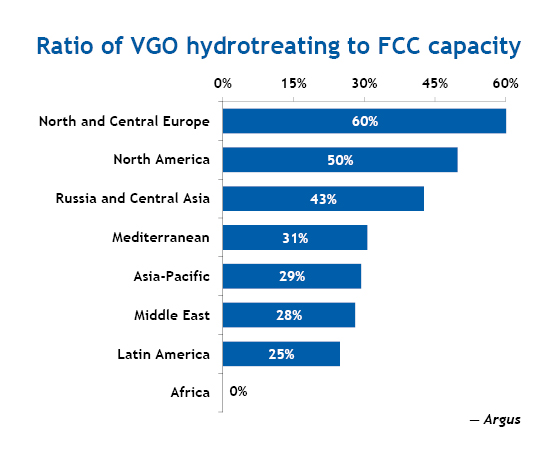 There are a range of other blendstocks from within the refining system that will form part of both blends. These are expected to be produced in comparatively smaller volumes so will not form the bulk of most blends.

In Asia-Pacific, the refining system will produce a range of blends, but we expect very-low sulphur residue blends to account for the largest share.

In China, PetroChina and CNOOC will be able to processes their own low-sulphur crudes, while refining giant Sinopec has more than 500,000 b/d of ARDS capacity across 11 refineries, accounting for nearly half of total ARDS capacity in China.

China will also produce low-asphaltene blends. It has an expanding gasoline surplus, much of which is exported to the gasoline-short southeast Asia market. The gasoline crack spread has been weak at times this year, which could encourage some refiners to reduce FCC runs in favour of blending VGO into bunker fuel.

Elsewhere in Asia-Pacific, VLSFO production is expected to be comprised primarily of very-low sulphur residue blends. Dominated by developing countries with ever expanding gasoline appetites, there is limited opportunity to reduce gasoline production.

The Middle East is a huge producer and consumer of sour crude, which limits the amount of low-sulphur residue available for the bunker market. But there have been several refinery investments in ARDS capacity in recent years, which could contribute to the bunker pool if the refiner decides to take that route.

But a lack of domestic sweet crude production is not a complete limitation. Vitol and Uniper operate two simple refineries in Fujairah that import low-sulphur crude with the aim of producing very-low sulphur residue blends.

The US could be a large supplier of VLSFO. It has both the refinery complexity and domestic crude slate to produce both blends in significant volumes. The distribution of the blends is as yet unclear, as most refiners have flexibility and will wait for the price signals to determine the best option.

Blends in Latin America are most likely to be based on very-low sulphur residue. Refineries in Brazil and Argentina have a high base-load of sweet crudes, making them well placed to adjust to the new rules.

Northwest Europe meets all the criteria for diverting VGO to the bunker pool, so we are confident that there will be a significant volume of low-asphaltene blend production here. But because the region is a net importer of crude, it has some flexibility to change its crude diet. Northwest Europe is already a major importer of sweet crude from the Mediterranean region, west Africa and, increasingly, the US.

The Mediterranean region is a mixed bag. To the north, you have European refiners with VGO to blend, but to the south, you have countries such as Algeria with simple topping refineries processing domestic sweet crudes. With access to an abundance of low-sulphur crude supply from north Africa and the Black Sea, refiners in the Mediterranean region are expected to be major producers of very-low sulphur residue blends.

Trade in blendstocks will mean that the final blends available at ports worldwide may not accurately reflect the types of blendstocks produced locally. Already this year there have been numerous cargoes of VLSFO blendstocks shipped from the Mediterranean and northwest Europe to Singapore.

Similarly, major bunker suppliers that are guaranteeing compatibility between their blends will need to ship certain blendstocks from regions of surplus to regions of deficit so that they are able to maintain compatible blends.

For refiners with options on the type of blendstocks that they will produce or whether to produce any at all, the decision will come down to what delivers the best margin.

For the latest news, insight and market activity related to the IMO’s 0.5% sulphur cap,you can sign up for our free bi-weekly newsletter.

How will IMO 2020 affect the petroleum coke market?

The introduction of IMO 2020 is expected to have a marked impact on petcoke markets, with some current aspects of supply and pricing the mirror image of expectations for the next few years.

Should shipowners fear fuel compatibility in 2020?

As shipowners prepare for the International Maritime Organisation (IMO) 0.5pc sulphur cap next year, compatibility concerns have washed over the bunker industry. But could they be overblown?