Booming US crude production and resulting export volumes are drastically changing the global crude trade flow and market landscape. Tune into our 6-part US crude podcast series, where we discuss key developments and trends that will ultimately impact future crude activity at the US Gulf coast. In this first episode, our Americas Crude Editor Gus Vasquez and Americas Crude Deputy Editor Amanda Smith explain why and how WTL (West Texas Light) spot trade has blossomed in west Texas as it makes its way toward the US Gulf coast and/or Cushing.

Gus: Welcome to the podcast from Argus, the leading provider of energy and commodity price benchmarks. We track and discuss the prices that create our world. And this is one of a six-part series about the prices affected by the changing U.S. crude oil infrastructure. I'm Gus Vasquez and I'm the editor of Americas crude.

Amanda: And I'm Amanda Smith, the deputy editor of the Americas crude team. It's been a really interesting time to follow crude markets that have been rapidly evolving with the boom in U.S. crude production that led to the allowance of unrestricted crude exports from the U.S. in 2015. And then, in turn, this has prompted the continued build-out of infrastructure to support carrying that crude to the U.S. Gulf coast for export.

Gus: So today we're going to be talking about WTL, which is a relatively new grade and for which the market is still, kind of, evolving. It's all pretty new, but it's also very interesting. So Amanda, how about we start with you maybe telling us a little bit about what WTL is and why people are so interested in it?

Amanda: Sure. So WTL stands for West Texas Light and this is going to be the crude that's above, in API gravity, the WTI specification. So in the past, that would've been lumped in as condensate and sometimes it's still kind of being referred to as condensate. But really it's over 44 degrees API gravity and under 50, although this does vary slightly by pipeline. And the reason that this is important is because the new production that's coming online from the Delaware Basin, out in West Texas and Southern New Mexico, tends to be lighter than WTI, and the ability to blend that production into WTI is limited. So there needs to be more crude sold as WTL. There's been a great deal of interest in having that transparency in the markets because it's going to really represent a large amount of the new crude production and the production that's going to be sold and exported in the future. So currently WTL is changing hands at discounts to WTI at Midland, and we've seen that pattern repeated at other locations. 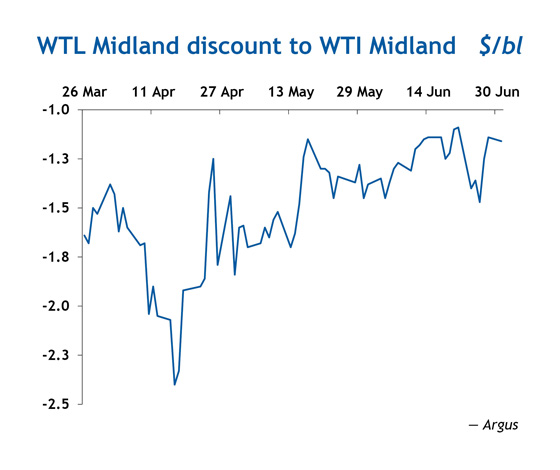 Gus: So, as I'm sure many of our listeners will know already, Argus does have an assessment for WTL, which we launched a little while back. Mostly because there was really a lot of interest in that and there was a lot of demand for it.

Amanda: Right. So the interest...we saw that pickup really when Plains made an announcement in February that shippers on the pipeline were going to start needing to nominate their volumes as WTL if it met those specifications. They were going to have to nominate those separately if it was going through the Wink Terminal South with Midland as its delivery point so that they needed to properly batch the crude by the specifications. So that helped push players into action and speeded up the development of the WTL spot market in Midland. So shortly after that, we started hearing more about, you know, when we're going to launch that assessment and we were able to turn that around pretty quickly and launched the WTL Midland assessment.

Gus: Yeah. And just to expand on that a little bit because it's a question that we get pretty often is, you know, how does Argus decide when to launch an assessment? So there's basically three things that we're looking for in a market when we're looking to launch a new price.

The first is spot liquidity. So you have to have a lot of transactions. Well, not a lot, there's no magic number, but you need to have a certain number of transactions in this market for us to be able to really understand if it's reflecting the value of the grade. Then you have to have market participation, meaning that you can't just have one participant that controls all the supply for example. You don't want a monopoly-type situation. You want multiple buyers and multiple sellers so that it's an active market. And then you want transparency, which is usually one of the biggest challenges for us, which is getting people to report their transactions once they actually do them. So, in this case, we did have discussions with the participants about reporting their transactions and we got some positive feedback and some support in this endeavor, and so we were able to launch the price.

Amanda: Right. So we launched, that was April 10th. So it's mid trade month, which was, kind of, unusual, like if we had just so much interest and excitement about it here that we went ahead and launched that. So the price is still really relatively new. We do have now three full trade month data sets that includes, though, some backfilling for the May trade month since it was in the middle of the trade month. So, so far we've seen 11 to 16 unique participants each month. And we've seen pretty good volumes, like 40,000, 100,000 and then 60,000 barrels per day reported each trade month between May, June, and July, so some promising data there.

Gus: Enough that we can draw too many parallels, right? But just as a point of reference, for those of you who know about our WTI Houston price, which is commonly known in the market as MEH which is WTI crude trading at Houston, at the Magellan East Houston Terminal. We launched that price back in early 2015 and for the first couple of trade months, we had something like 17,000 barrels per day and just over 38,000 barrels per day in the first two months. So, as you can see, this is vastly different to that. The WTL market is well ahead of that pace. Of course, there are some differences there, which is why we can't draw too many parallels. But the market in 2015 obviously was very different, but it shows that markets can develop quickly. And in the case of WTL, because we've had so much volume to begin with, I think we can, kind of, safely assume that we're going to see some of those volumes increase, especially because we know production is going to continue to grow out in West Texas, right?

Amanda: In Midland, we've been seeing the WTL at trades relative to WTI Midland at a discount to WTI Midland. And when it started, it was about $1.75 under WTI Midland then it ticked up the trading around a $1.50, then $1.40. And then in the July of trade month, WTL averaged about $1.25 under WTI Midland for the trade month. And so we think that companies are getting more comfortable with the WTL segregation and expectations of quality, and that's helping to narrow in its discount. And in terms of other locations, we haven't had too much reported directly yet. At Cushing, we've seen West Texas Lights discount to domestic suite narrow from towards the beginning about 85 cents to most recently 40 cents under DSW. For Houston delivery, WTL was reported trading some in June between $1.50 and $1.60 under WTI Houston, so at Magellan's East Houston Terminal.

In the Gulf Coast Waterborne market, we did see a few June loading cargo offers FOB Seabrook or Beaumont offered at discounts to WTI Houston. And we know it's been exported to Europe, South Korea, and Colombia. So, besides having launched this price, we're trying to look to see where is this going to go next? What has the potential to become our next assessment hub? So we're looking at Houston. Then, of course, a lot of the new pipeline capacity coming online from West Texas is going to the Corpus Christi area, so also looking at that as a possibility for transactions to start circling around that location as well.

Gus: So that basically brings us to the end of this podcast. Thanks, Amanda for all that. And I thought it was really useful. For those of you that enjoyed it and liked it please don't forget that there are other five parts of this series that you can listen to. If you want further information about any U.S. crude markets, WTL in particular, including any daily prices, you can check out the Argus Crude or the Argus Americas Crude report.

Amanda: Yes. And there's also a date set for the next Argus Americas Crude Summit, which will be in Houston on February 3rd through February 5th next year, 2020. So check out argusmedia.com for more details. Thanks for listening, and we'll be back next time with another look into one of the prices that create our world.