Brazilian oil production achieved a record high in May, boosting supply available for export to China, which has emerged as an important outlet for Brazilian crude.

Brazilian oil output rose to 2.73mn b/d in May, after hovering around 2.6mn b/d since December 2017, data from Brazil’s oil regulator ANP show. The increase was made possible by new well connections at the Buzios and Lula pre-salt fields, which will support even larger output growth in the second half of this year, Brazil’s state-controlled Petrobras says. The firm expects Brazilian production to grow by 13pc this year, from 2.01mn b/d in 2018. 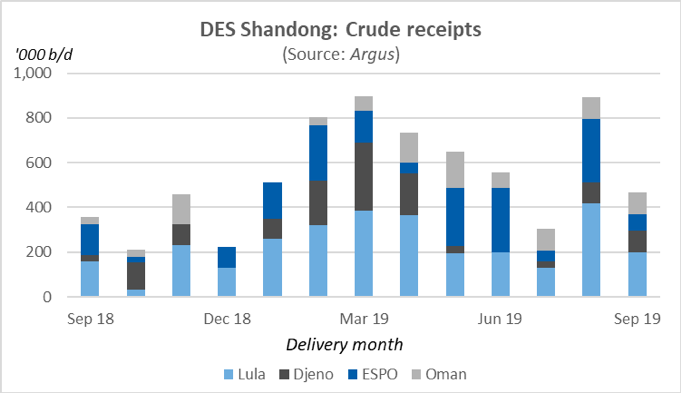 More and more of Brazil’s production — particularly Lula — is heading to China’s Shandong province, where refineries are configured to produce higher proportions of diesel. Argus’ delivered ex-ship (des) Shandong assessments provide the only transparent market price for Lula. China takes two-thirds of Brazil’s crude exports — or 850,000 b/d in January-May — and some 420,000 b/d of Lula and Petrobras’ lookalike Buzios grade has traded for delivery to Shandong in August. Shandong’s previous record Lula intake was 390,000 b/d in March. Another 200,000 b/d has already traded for delivery in September.

Lula premiums to Ice November Brent have fallen to $3.40/bl for August-delivery cargoes, from $4.55/bl for July receipts, as most Lula cargoes have now sold, prompting Shandong refiners to look for alternative grades such as Russian ESPO Blend.

The Petrobras-operated Lula field remained Brazil’s biggest producer in May producing around 910,000 b/d, up by 4pc from April. Lula, in Brazil’s offshore Santos basin, now accounts for a third of oil produced in Brazil. Crude production from the pre-salt offshore fields accounts for almost 61pc of Brazil’s total production, a figure that is expected to grow as upstream investment shifts from the country’s ageing post-salt fields in favor of big pre-salt reservoirs.

How the US shale boom has propelled pipeline infrastructure buildout

Pipeline and export infrastructure is finally catching up with the US shale oil boom, with most activity occurring around the US Gulf coast to support increasing exports. In addition to investments in new pipelines and reversing the direction of existing pipelines, a ne...