Fuel switching and renewable generation in the UK have helped to cut emissions in the power sector, but the UK power sector still faces huge decarbonisation challenges.

In the light of recent environmental protests in London, it is perhaps worth acknowledging the huge reductions in emissions the UK has achieved in recent years – in the power sector at least.

Emissions have fallen off a cliff in the six years since the UK introduced an additional tax on carbon in power generation in 2013. 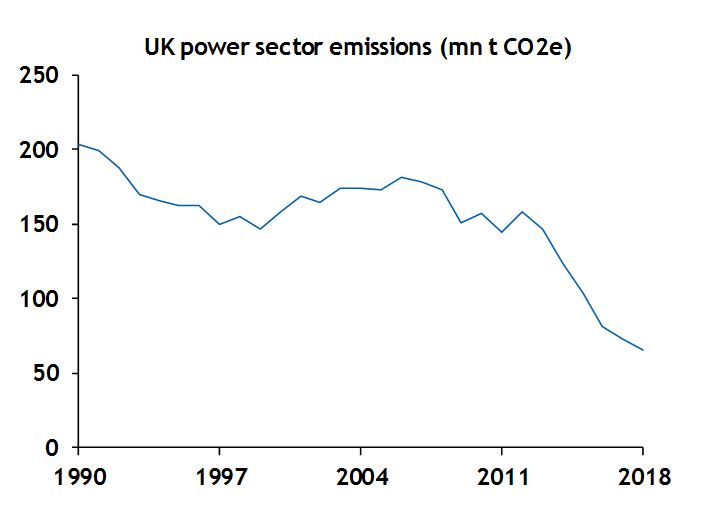 The UK introduced the carbon price support (CPS) in 2013, which generators had to pay in addition to buying emissions allowances on the EU emissions trading system (ETS). The tax was set at £5/t tCO2e at its outset, rising to £18/t tCO2e by 2015.

This has led to a large increase in the running costs of fossil-fuel fired plants, particularly coal which emits more than gas.

Without the CPS, the marginal cost of power generation for a modern coal plant — the cost of it buying coal and ETS allowances — would have been slightly below that for a relatively modern gas plant in recent years. 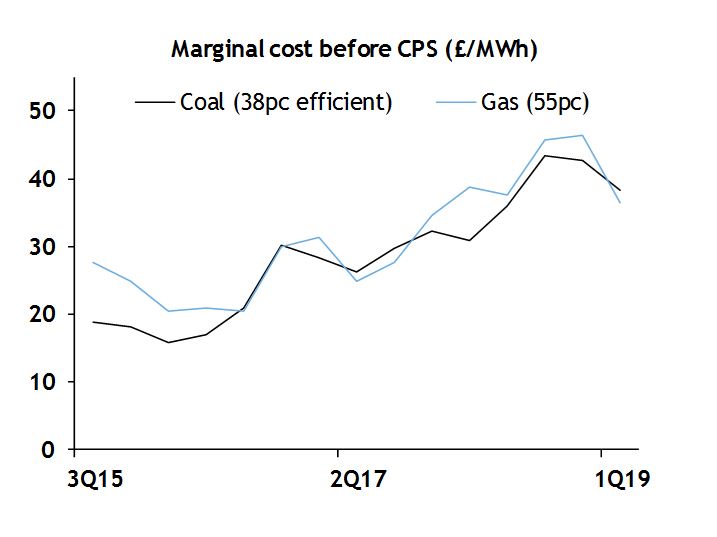 But with the additional CPS, the marginal costs of coal output has been higher than gas. 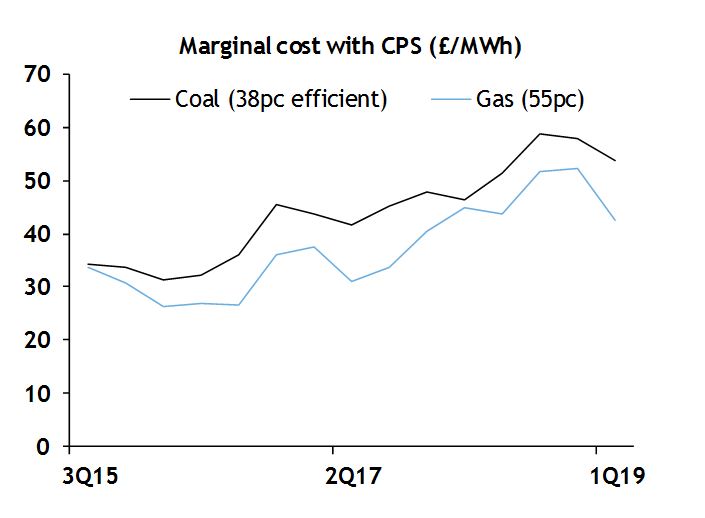 As a result coal has been unable to compete with gas in the wholesale power market, leading to sharp reductions in coal-fired generation. 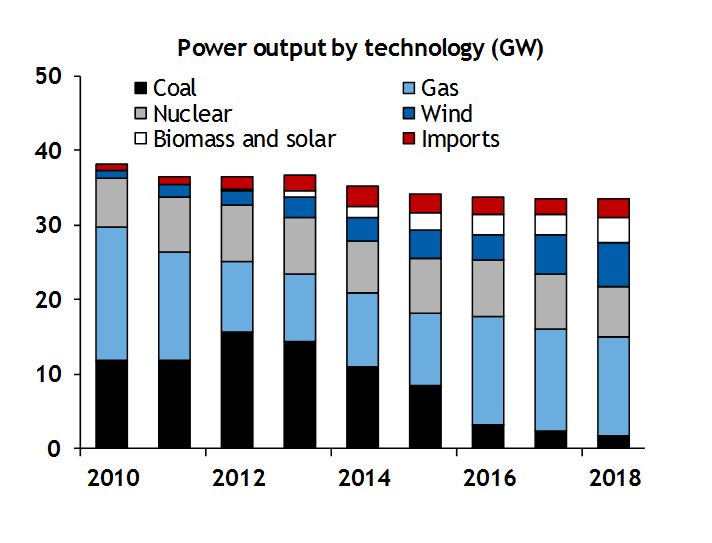 Large amounts of coal-fired capacity has closed, with further closures expected in the coming months and years. 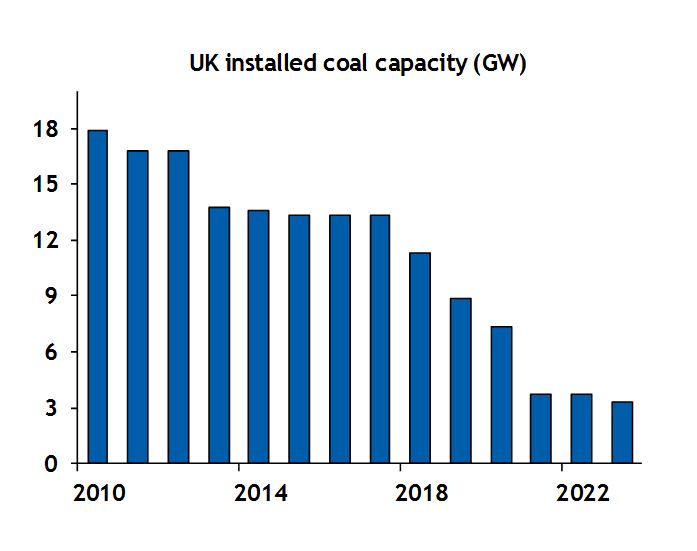 Fuel switching is only half the story. Coal and gas have been competing for a smaller share of the pie, as UK power demand falls and as output from renewable sources increases.

Renewable generation should rise sharply in the 2020s, driven by offshore wind. At 7.9GW by the end of 2018, UK has the highest levels of installed offshore wind capacity in the world.

Another eight projects with a combined capacity of 6.2GW will come online over 2019-23, taking installed capacity to over 14GW. 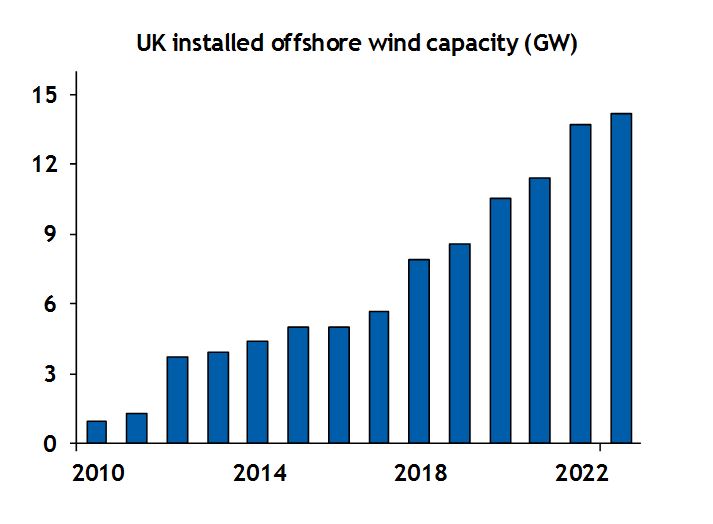 And the government and offshore industry have agreed a ‘sector deal’ to target 30GW by 2030. This would make offshore wind the UK’s largest source of power generation and could triple UK wind output compared with 2018 levels.

As a result emissions will continue to decline in the electricity sector, making electrification a viable option for other sectors struggling to reduce their footprint — notably transport and heat.

Phasing out gas may prove much more difficult than coal — thermal capacity will be needed during spells of still weather for the foreseeable future.

The government strategy to replace the country’s ageing zero-carbon nuclear fleet is in disarray, with capacity set to fall in 2020s even if Hinkley C is built on time. 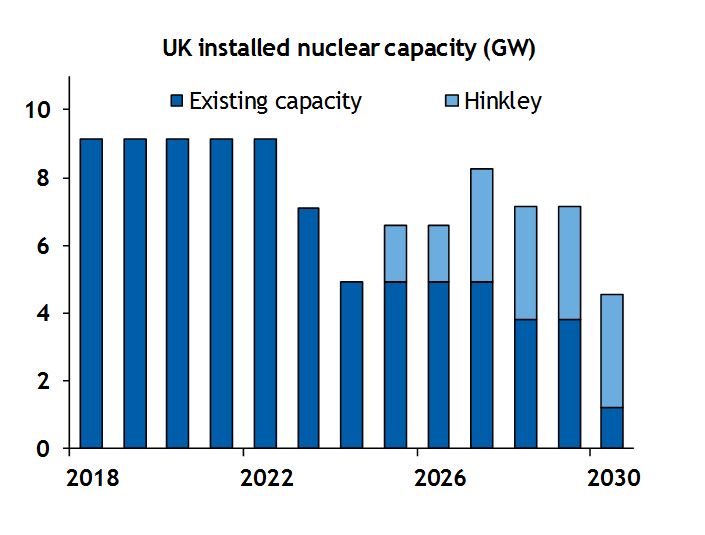 And solar and onshore wind deployments have stagnated since subsidies ended.

But the extraordinary reductions achieved in the past six years should give some cause for optimism.