Headwinds exist for US PVC market due to the long winter weather impacting the construction season, however, the market could rally with lower mortgage rates and increased consumer confidence.

With winter weather conditions throughout much of the US lasting well past the traditional start of the spring construction season, the polyvinyl chloride (PVC) market has seen sales in the first four months of the year decline by 2.7pc versus 2018, showing less than expected growth so far in 2019. However, falling mortgage rates and improving consumer confidence may provide just the jolt needed to make up for some of that lost ground.

With more than 70pc of PVC sales tied to the construction industry in sectors such as pipes, siding, window and door profiles, vinyl flooring and fencing and decking, the health of the PVC market is inextricably tied to the housing market. And this year, that sector has gotten off to a rocky start. 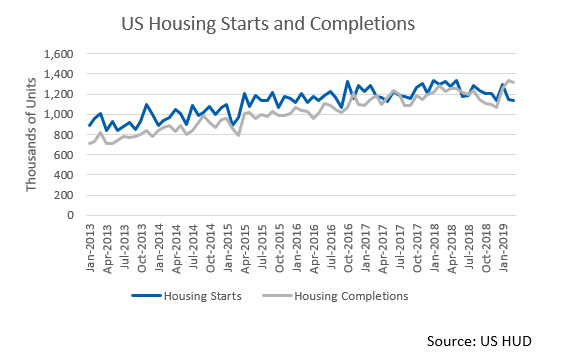 US housing starts in March were at a seasonally adjusted annual rate of 1.139mn units, down by 14.2pc from the March 2018 rate, according to the US Department of Housing and Urban Development. That rate is still well above the 505,000 units seen in 2009, the first year after the global financial crisis. But it is far from the pace needed for the PVC industry to match the 3pc growth seen in 2018.

Total US PVC sales through April reached 5.33mn lb, down from 5.4876mn lb in the first four months of 2018, with a 1.81pc increase in export sales unable to make up for a 5pc decline in domestic sales, according to data from the American Chemistry Council’s Plastics Industry Producers’ Statistics Group as compiled by Vault Consulting. For now, US PVC producers are optimistic that they can still end the year with positive growth.

“With the long winter weather this year and the weather that we’ve seen, I do believe a great majority of that [lost demand] is driven by just the delays in the start of the construction season,” said Steven Bender, the chief financial officer for US PVC producer Westlake Chemical during the first quarter earnings conference call on 2 May.  Already, he said the company has seen much improved demand in April and May.

There have been some recent positive signs that the US economy and the housing market could be ready for a rebound. The Conference Board’s Consumer Confidence Index registered at 129.2 in April, up from 124.2 in March, based on consumers’ expectations about current and future market conditions. While the level is still below levels seen in fall 2018, the upturn signals that consumer consumption should improve.

Also, in its revised 2019 housing forecast, released late last month, Realtor.com suggests that the US housing market this year will be a bit stronger than originally forecasted. The improved outlook is due in part to some rosier economic indicators as well as a recent decline in mortgage rates. Originally mortgage rates were expected to average 5.5pc this year, but the new forecast calls for an average rate of 4.5pc.

“We believe 2019 will be characterized by lower, but still increasing mortgage rates that will buoy home prices and sales by boosting buyers’ purchasing power beyond what we initially projected,” said Danielle Hale, realtor.com’s chief economist. “This will create a slightly hotter, but still cooling housing market relative to the initial forecast five months ago.”

There are still some potential headwinds for the US PVC market, including an ongoing trade war between the US and China, which continues to drive up costs for certain construction materials, as well as fears of a global recession. Learn more about the risks and challenges to the US PVC market at the Argus US Chlor-Alkali Summit on 22 May-23 May 2019 in New Orleans, Louisiana.

An overarching message from the marine litter-themed Polytalk 2018 conference was a plea for the plastics industry to “seize the moment” and harness the new public enthusiasm to tackle plastic waste.

The plastics industry is wary that some discourse around curbing plastic waste oversimplifies an issue. How should entities reduce use or increase recycling while meeting consumer expectations?

Oil to petchems — flavour of the month