Prompt spot charter rates for tri-fuel diesel-electric (TFDE) LNG carriers have fallen back in recent days after significant gains earlier this month, with additional demand to hold rates or even push them higher found to be wanting.

Freight rates on 9-15 October for TFDE spot fixtures west of Suez rose to $135,000/d from $90,500/d, an increase of almost 50pc, while rates for the same vessels in the Pacific basin rose by just over 50pc, to $134,000/d from $88,000/d. With ballast components already around 100pc of hire costs, increases in these headline rates were the most significant factor driving round voyage prices higher.

Argus will launch three spot round voyage LNG freight assessments on 25 October, two of which will be for loadings at US liquefaction facilities for delivery to Europe or northeast Asia. The assessments on all three round voyages will be daily, allowing them to capture the inter-day volatility seen so far this winter. 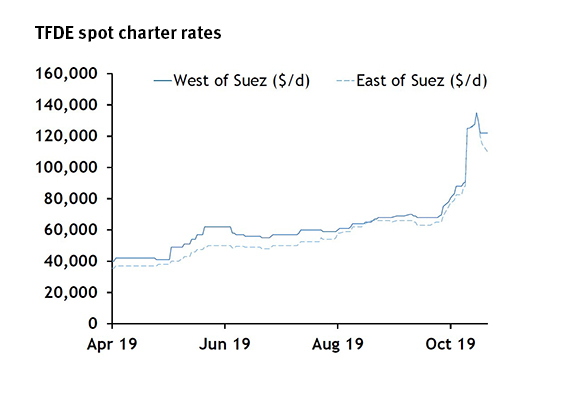 The increase in rates at the start of October was driven initially by limited vessel availability for charter periods starting in late October-November. Firms seeking to delay LNG deliveries — to capture the contango in delivered prices across both basins created by the rise in forward prices relative to prompt — had secured additional shipping capacity to replace vessels that would be unable to make their next loading because they were still yet to deliver their cargoes. This tightened availability, particularly in the Atlantic basin.

And weaker European delivered prices against firm northeast Asian prices over the period widened the inter-basin arbitrage for loadings at US export terminals, meaning that firms with unsecured spot cargoes loading in November would have been likely to be able to attain stronger returns from delivery to Pacific destinations, instead of to European markets. 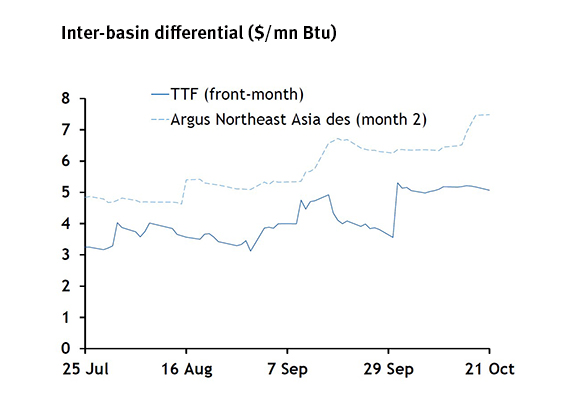 Deliveries to northeast Asia from the US take around twice as long as deliveries to Europe, meaning that firms seeking to take advantage of this arbitrage opportunity would need spare shipping capacity. Most of these offtakers were holding balanced freight positions ahead of winter, market participants said, meaning that they would have to seek additional capacity from the spot market. The location of the US relative to LNG demand markets means that these cargoes already have the highest tonnage demand — the number of vessels required to load every 1mn t — in the global market.

But it was US sanctions imposed on Chinese shipping firm Cosco’s China LNG Shipping International (CLNG) subsidiary that are likely to have compounded the tightness in the LNG freight market, supporting rates. A wholly-owned subsidiary of the firm holds 50pc of equity in a joint venture with Bermuda-based shipowner Teekay, which provides five operational Arc7 ice-class vessels to the Yamal LNG project in Russia, with another ship due to be delivered this quarter.

The Yamal project’s 15 Arc7 vessels mean that it has the shipping capacity to deliver directly to Europe this winter, once the Northern Sea Route closes, despite the terminal operating significantly above its nameplate liquefaction capacity. But if sanctions were to remain on six of these vessels, meaning that they would be unable to make deliveries to regasification terminals, the project’s resulting lower shipping capacity suggests that it would instead have to transship most Yamal cargoes onto lower ice-class vessels at Honningsvag and Murmansk, Yamal operator Novatek’s chief financial officer, Mark Gyetvay, said.

The prospect of more transshipments means that Yamal LNG is likely to have had to secure additional shipping capacity to receive cargoes at the two transshipment locations, further tightening the freight market. It is this anticipated additional freight demand that tightened the market.

But the Teekay joint venture is no longer considered a blocked person by the US Treasury Department, Novatek has said, meaning that Yamal LNG’s Arc7 shipping capacity this winter is likely to return to previously expected levels. It is unclear how many vessels the project fixed on the spot market, if any. Yamal may seek to sub-let any vessels chartered on a short-term basis.

Rates slip back as additional demand fails to emerge

TFDE availability in both basins remains tight and the inter-basin arbitrage for November-December has held open, but little additional demand has emerged in the LNG spot freight market in recent days, paring the rise in charter rates. And there are signs that vessel availability could be increasing, particularly in the Pacific basin.

Instead, rates have slipped, stabilising at around $120,000/d in the Atlantic basin and $115,000/d in the Pacific, which are likely to be an indication that tightness in the prompt spot charter market has fallen back slightly from earlier in the month.

And some shipowners may previously have been holding off from offering vessels for fourth-quarter charter, in expectation this summer of prompt spot charter rates rising above forward rates during October-November. This led to most vessel availability coming from term charterers seeking to sublet vessels as the market tightened, market participants said. But with rates rising sharply earlier this month, owners could now be offering these vessels on the prompt spot market, providing some additional supply to the LNG freight market and helping it to stabilise.

A number of vessels have been heard open in the Pacific basin in recent days, indicating that availability is increasing for firms seeking east of Suez spot fixtures, despite Atlantic availability remaining tight.

Spot charters fixed on a prompt basis now are expected to start in late November-early December, when a number of those vessels chartered for single journeys — as firms sought to delay deliveries — may become available again. But demand for these vessels is likely to be weaker for this period than at the start of the winter.

The contango in Europe and northeast Asia is shallower for later this quarter, suggesting that sellers are unlikely to repeat delays in delivering to discharge ports, and meaning that these firms do not have to seek spot charters to replace vessels and maintain their respective loading schedules.

US demand could support rates later this winter

Increases in US liquefaction capacity throughout 2019, combined with planned start-ups in the first quarter of next year, are expected to increase tonnage demand compared with last winter.

The commissioning of the 10mn t/yr Corpus Christi, the first 5mn t/yr trains at the Cameron Freeport facilities, as well as the fifth 5mn t/yr train at Sabine Pass, lifted US loading demand to more than 50 cargoes/month at the start of October from 29/month a year earlier. 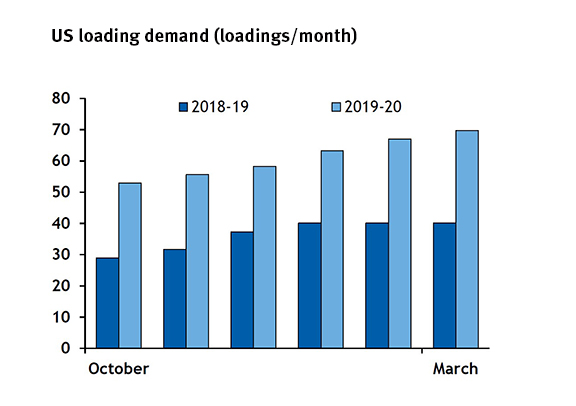 And this loading demand could rise further to around 70 cargoes/month by the end of winter, as the next 5mn t/yr trains at Cameron and Freeport start up, with the incremental commissioning of the 10 400,000 t/yr trains at the 4mn t/yr Elba Island facility adding to US liquefaction capacity over the period. Only 2.4mn-7.7mn t/yr of additional liquefaction capacity could come on line outside of the US over the coming winter, depending on the start-ups of the third 3.8mn t/yr train at Tangguh LNG in Indonesia and Malaysian state-owned Petronas' 1.5mn t/yr PFLNG2 facility.

Tonnage demand at US liquefaction facilities has averaged 1.77 in the past two winters, the highest globally.

But the rate of newbuild LNG carriers coming onto the water in 2019 has been comparatively low, and is expected to hold at this rate through this winter, tightening availability in the global LNG freight market.

With notable differences in journey times for delivery to Europe compared with northeast Asia, the translation of US LNG loading demand into freight tonnage demand is likely to depend on the extent of inter-basin flows from the country. Strong deliveries of spot cargoes primarily to Europe could be maintained with fewer vessels.

But the inter-basin arbitrage for loadings over the rest of the fourth quarter may currently be wide enough to encourage flows to northeast Asia, although the differential does tighten in the first quarter of 2020.

US tonnage demand slipped to 1.78 in the first quarter of 2018, which if matched in January-March 2020, would still be likely to require around 105 vessels, as new liquefaction trains ramp-up and drive loadings higher.

But if the number of unsecured cargoes from the US to be loaded over the rest of the fourth quarter is low, the prospect of additional freight demand could be limited.

Northeast Asian delivered prices have risen in recent days, as buyers in the region have stepped into the market to secure their respective winter requirements. But spot prices for prompt deliveries to the region could slip later this winter, once these requirements have been fulfilled. This may lead to a tighter inter-basin arbitrage, and curb US-northeast Asia spot LNG flows. 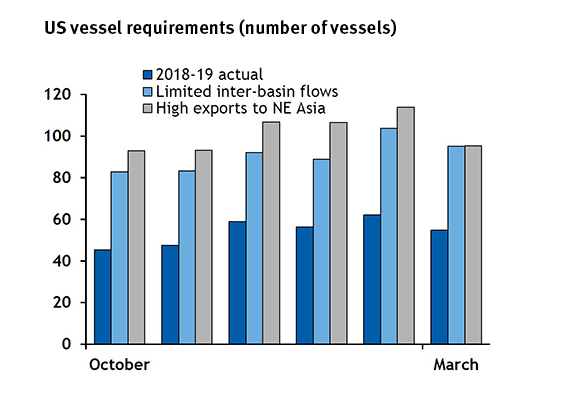 Stay up to date. Visit the Argus LNG hub for the latest prices and news on LNG freight rates.

The China Connection: Xi vs Trump

Podcast: Xi vs Trump. How have global and Chinese and US commodities markets shifted with each blow of the trade war?

Preparing for the challenges and opportunities presented by IMO 2020 has narrowed the market focus on early next year. But there is plenty to keep an eye out for after the sulphur cap comes into effect and over the following years.

IMO 2020 Series – Beyond the bottom of the barrel

Most discussion around IMO 2020 has been, quite rightly, focused on the impact on the marine fuels market. But it has the potential to cause disruption far beyond bunkers.