US crude flows have fundamentally changed nearly every month this year, leaving traders to stagger through the market’s complex dynamics. September’s bull market post-Saudi attacks came to an abrupt halt when the US slapped sanctions on affiliates of shipping giant Cosco.

WTI fob Houston fell by $1/bl against Ice Brent on the day the sanctions were announced, and by another $1.60/bl in the month following. Cargoes have traded at an average $2.04/bl discount to Ice Brent since the 26 September start of the November US trade month, reflecting an 80¢/bl drop from a month prior.

But with freight finally beginning to ease, it appears markets may soon rebalance as traders adjust to the new dynamics. 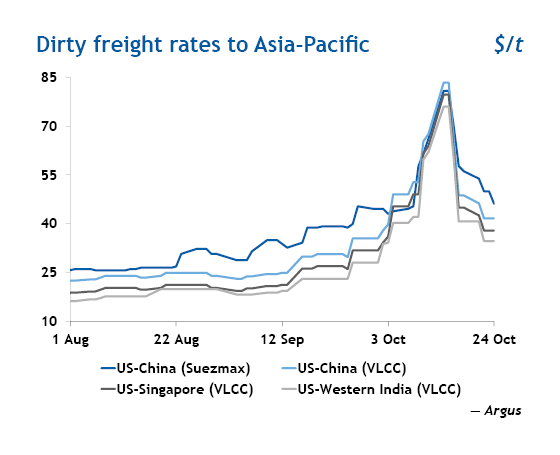 The theme of the latest US crude export numbers can be summed up in one word: disappointment. The market was expecting a big number — as in a record-breaking, above 3mn b/d number — but instead the Census data inspired only a collective yawn from the market.

US crude exports moved only slightly higher in August to 2.73mn b/d compared to July. That is not even close to the record high of 3.16mn b/d in June.

Why did the market have such high expectations for the August number? It’s all about Corpus Christi. Two large pipelines – Plains All American Pipeline’s 670,000 b/d Cactus 2 line and Epic’s 400,000 b/d crude line started service in mid-August, carrying Permian crude to Corpus Christi on the Texas coast. It’s unclear how much crude moved as the pipelines started up service but exports out of the Corpus Christi port district jumped by roughly 285,000 b/d — or 71pc — from July to almost 685,000 b/d in August, according to figures by the Port of Corpus Christi Authority.

In yet another surprise, the Census Bureau corrected data for July and August that indicated the US had exported crude to Mexico, after Mexican government officials disputed the information. So just to be clear, Mexico took zero US crude in July and August. The Census said it "identified a misreporting of filings." That was music to the ears of Mexican President Andres Manuel Lopez Obrador who took office in December on a platform of energy independence.

Phillips 66 Partners has started linefill and commissioning activities on its much-anticipated 900,000 b/d Gray Oak crude pipeline from the Permian to the US Gulf coast. The company expects to begin initial service in November.

Meanwhile, Energy Transfer squeezed more capacity out of its Permian Express system, adding a 120,000 b/d expansion from Colorado City to Nederland in Texas. And the company recently announced plans for another new build along the US Gulf coast: the 500,000 b/d Ted Collins crude pipeline that will connect Energy Transfer’s Nederland terminal to the massive Houston Fuel Oil Terminal on the ship channel. Energy Transfer will own both terminals, and a stronger stake in the export market, as part of its recently announced purchase of SemGroup.

Last but certainly not least, Enterprise Products Partners is also pipeline happy. The company has secured enough commitments to move forward with another Midland-to-Houston pipeline. This one will start at 450,000 b/d.

On the waterfront, the Carlyle Group has pulled out of a joint venture project to develop a VLCC crude export terminal on Harbor Island. The Port of Corpus Christi, a partner in the venture, says the project is still moving forward. But the Carlyle withdrawal is a big hit to the plan as the private equity group had pledged to find private funding for additional dredging to fully load the supertankers.

Census figures will likely show US crude exports under 3mn b/d for the third month when the agency releases September data, reflecting limited Chinese demand during the first month of a new 5pc levy on crude shipments. At least 2.36mn b/d of US crude was exported to non-Canada destinations in September, according to preliminary tracking data compiled by Argus.

We’ll see you again for next month’s analysis on US crude export flows and dynamics. Until then, smooth sailing.

Podcast: The Saudi crude oil supply shock comes at a time when refiners across Asia were already challenged to replace sanctioned Iranian barrels.

The US Crude Export Chronicles: September 2019