Most discussion around IMO 2020 has been, quite rightly, focused on the impact on the marine fuels market. But it has the potential to cause disruption far beyond bunkers.

It is not news that IMO 2020 could have a wide impact — no commodity market conference over the last year has gone without IMO 2020 on the agenda, however obliquely relevant. But it is important to understand how and why the IMO contagion could spread. In this post, part three of our five-part series on IMO 2020, a range of Argus experts explain why their markets could be impacted by IMO 2020.

First off, why is this specification change set to have such a wide impact? Fuel specification changes in the past have occurred without causing disruption to numerous other markets. The main factor at play this time is the severity of the change. The reduction in the sulphur cap to 0.5pc from 3.5pc is essentially removing the use of high-sulphur residue — some will remain through scrubbing — from the bunker market. It is this removal that is set to cause the knock-on effects across a range of products. There are several ways in which this will occur, but we’ve identified two primary categories and most products will fall into at least one.

Competition for the same molecules

Most high-sulphur fuel oil (HSFO) will be replaced with very-low sulphur fuel oil (VLSFO) and marine gasoil (MGO). Producing these to meet bunker demand will increase competition for low-sulphur molecules in the refining system. As discussed in part two of this series, one method of producing VLSFO is by diverting vacuum gasoil (VGO) to bunker blending. The chart below shows the relative potential loss of products from producing VLSFO and MGO. As this highlights, almost all of the replacement fuels will come at the expense of other streams. 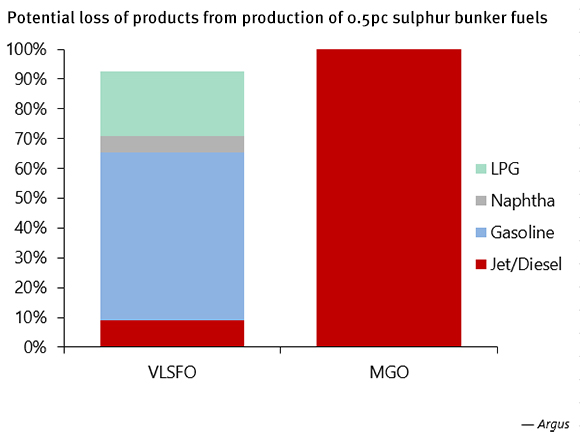 These losses can be offset by increasing crude runs, but only in regions where there is enough headroom in refinery utilisation.

There is greatest potential for tightness in middle distillates, jet fuel and diesel, particularly if MGO is favoured over VLSFO in the early period, as we expect.

Traders in the diesel and jet fuel markets expect IMO to offer support for crack spreads moving into next year. A tightened Asia-Pacific low-sulphur market may also result in less diesel and gasoil from east of Suez arriving in Europe, compounding the supply deficit. On the jet fuel side, airlines’ earnings are expected to take a hit from higher fuel costs.

The main purpose of cracking VGO in a fluid catalytic cracker (FCC) is to increase a refiner’s gasoline yield. Gasoline will consequently face the largest production losses if it is diverted into blending VLSFO. While naphtha makes up a relatively small share of FCC output, it is a key gasoline blend component, so a fall in gasoline production will have an impact on naphtha. The sentiment around the impact on gasoline is less bullish. Gasoline is looking increasingly long, as demonstrated by weak crack spreads in Asia earlier this year, which could provide some cushioning to upward price movements if there is any fall in supply.

But there is also increasing uncertainty around the extent to which IMO-related support for these products will be offset by a worsening macroeconomic picture. The key uncertainty is which of these two opposing trends — demand pulled down by weakening economic output, and tighter supply on the back of lower feedstock availability — will prove the more powerful factor in shaping diesel and gasoline premiums to crude.

The decision on whether a refiner makes the operational change to divert VGO will most likely be determined by gasoline margins, but LPG, naphtha and gasoil will also be affected.

Two factors stemming from IMO 2020 could indirectly affect the supply and demand fundamentals of the base oils market. The supply side is linked to competition for VGO. Base oil supply, which is already in competition with gasoline and middle distillate production for VGO, could come under even greater threat if the bunker market becomes another pull on feedstock.

On the demand side, as a result of ships switching to low-sulphur bunkers, shipowners will have to switch to marine lubricants with a lower base number. With fewer alkaline compounds that require dissolving, solvency – which has been a hallmark of Group I base oils – is becoming less of a priority. This will open up the marine sector to using more premium Group II base oils, reducing demand for Group I.

The bunker market accounts for over 50pc of HSFO demand. With this significantly reduced, HSFO will either need to find demand in other markets or not be produced. We expect it to fall in value, so refiners with a large yield of high-sulphur residue will look to increase residue destruction and desulphurisation. This will have an impact on a range of products, including bitumen, petcoke and bitumen.

Refiners with coking capacity are expected to increase utilisation to reduce any residue production. This, combined with more than 600,000 b/d of new coking capacity being scheduled to come on line over the next three years, will increase supply of petcoke. However, supply of very-low sulphur anode grade petcoke is seen as being under threat from the change in coking margins, given that this feedstock could be blended into higher-value 0.5pc sulphur bunker fuel.

Conversely, upgrading will reduce bitumen supply, and there is a risk that bitumen-producing refineries could close as refiners move to lighter crude slates or install cokers and other upgrading capacity to produce lower-sulphur fuels and cut residue. This could lead to tightness in some parts of the world during the peak paving season.

The big issue, however, is that bitumen and HSFO prices are already decoupling and buyers and sellers are looking for different ways to price bitumen, as bitumen often involves longer-term contracts with agreements tied to HSFO quotes.

Finally, we come to sulphur, the culprit responsible for this situation. The bright yellow by-product of the oil and gas processing industry is generally looked upon something that needs evacuating to make way for more important commodities. But it is a 65mn t market and a key raw material in the fertiliser and metals industries. When the IMO 2020 regulation was first announced, there were predictions that more than 5mn t of additional sulphur would hit the market.

But now, as we rapidly approach the deadline, there are no signs of this becoming a reality.

Processing of low-sulphur crudes will reduce sulphur availability in certain regions. But it needs to be remembered that the Middle East, which is the world’s biggest sulphur-producing region, derives most of its sulphur from the processing of natural gas, so the IMO 2020 factor is not necessarily of huge concern.

Investment in desulphurisation technology to increase production of low-sulphur feedstocks does not necessarily mean there will be an increase in production of tradeable sulphur. Further investments in sulphur recovery units, storage, granulators and dry bulk logistical systems are required to actually allow what is removed through desulphurisation to become a tradeable product. At the moment, there is no big push towards developing this additional infrastructure.

For the latest news, insight and market activity related to the IMO’s 0.5% sulphur cap, you can sign up for our free bi-weekly newsletter.

Most of the 200mn t/yr high-sulphur fuel oil (HSFO) bunker fuel market will shortly be replaced by low-sulphur alternatives. As discussed in the first blog post in this series, we think marine gasoil (MGO) will account for a large share of the demand early on. The remai...

How will IMO 2020 affect the petroleum coke market?

The introduction of IMO 2020 is expected to have a marked impact on petcoke markets, with some current aspects of supply and pricing the mirror image of expectations for the next few years.