The aftermath of the attacks on Saudi oil infrastructure is clouded with uncertainty. Reassurances on production recovery may prove overly optimistic, suggesting that utilising alternative supplies will minimise Opec spare capacity and/or tighten global inventories. Add in the risk of military reprisals and short-term crude prices could easily spike higher once again, with associated economic risks.

Tuesday’s press conference by Saudi Aramco and Saudi government officials did much to calm markets after an initial $12/bl spike in crude prices on Monday, following attacks on the Khurais and Abqaiq production facilities in the country. Apparently, half the originally-shuttered 5.7mn b/d of crude production is now restored, and output could even regain pre-attack levels — of some 9.8mn b/d — by the end of September. However, confusingly, restoration of Saudi Arabia’s full 12mn b/d production capacity is expected to take until the end of November to achieve. 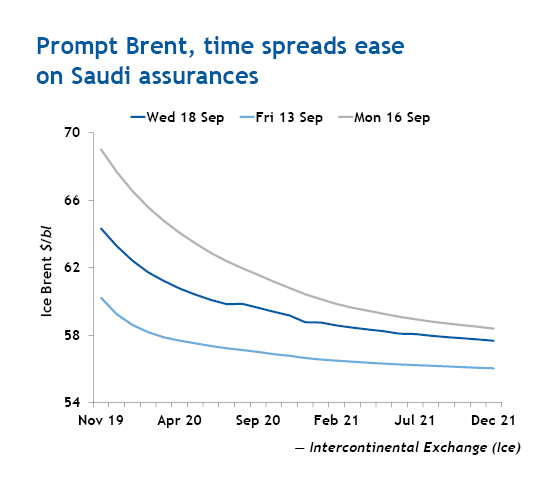 As always, the devil is in the detail, and there appears significant wiggle room in the wording of the Saudi assurances to suggest that full restoration of wellhead production — as opposed to the less well-defined parameters of “supply” or “output” — might take longer than planned.

For the sake of generating a simplified “lost barrels” scenario, therefore, let’s assume yesterday’s production was 6.95mn b/d (9.8mn b/d minus 5.7mn b/d plus 2.85mn b/d). If actual production recovers to pre-attack levels not by the end of September, but rather by the last week of November — in line with the anticipated recovery in productive capacity — this implies monthly Saudi crude production as follows: 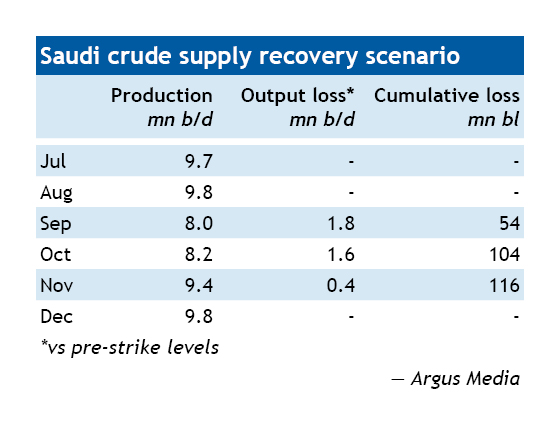 All else being equal, which is admittedly seldom the case, this knocks 0.6mn b/d off global 3Q19 oil supply and 0.7mn b/d off 4Q19. Other Opec producers could raise production to compensate — albeit partly with dissimilar quality barrels to Arab Light and Arab Extra Light). Alternatively, commercial and strategic stockdraws could be mandated to ensure adequate supply. The Saudis have already noted their intention to ensure September export commitments by using stocks, while the US and IEA have cited the availability of strategic inventories, albeit keeping their powder dry for now.

Increased production from other Opec producers would obviously squeeze already-tight Opec spare capacity, not least as immediately before the attacks the Saudis held two-thirds of an estimated 3mn b/d of global spare capacity. If stockdraws are used instead to replace the bulk of lost Saudi production, then 2H19 global inventory draws will steepen compared with those already envisaged pre-strike. Either way, crude prices seem likely to strengthen through to the end of 2019, with impending IMO 2020 rule changes regarding marine fuel providing further support. 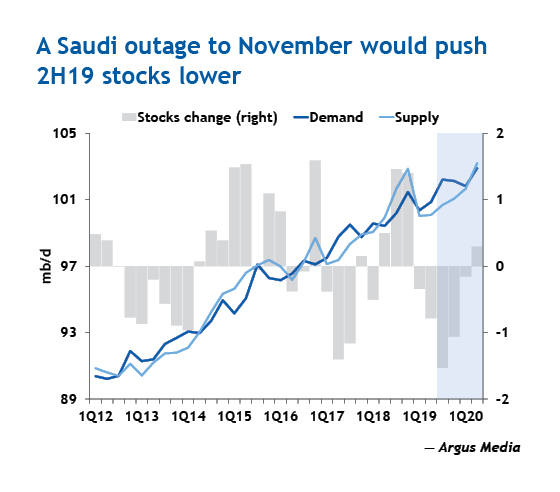 ...and even foggier geopolitics

A press conference from the Saudi defence ministry earlier today offered evidence that Iran was behind Saturday’s attack on the Khurais and Abqaiq facilities — complete with a display of what the Saudis claim are Iranian-made cruise missiles that missed their target and parts from Iranian-made drones.

Normally, an Iranian strike at the heart of Saudi Arabia’s hydrocarbon sector, if responsibility proven, would be sufficient to provoke a massive military response. But ahead of a US election year, when fuel prices for farmers, truckers and motorists take on added resonance, the military option becomes even more politically troublesome than usual.

One problem for the US administration is that spare production capacity was almost wholly concentrated in Saudi Arabia itself, so the supply cushion necessary to ease a likely surge in crude prices following military strikes on Iran is largely absent. If Iran is indeed shown to have been behind the Abqaiq attacks, they will nonetheless have demonstrated tactical acumen in spiking the US’ ability to respond militarily. It’s akin to the double whammy of burning down your neighbour’s house and the fire insurance policy along with it.

President Donald Trump’s administration has repeatedly threatened to respond unless Iran desists from what are seen as malign activities in the Middle East. However, US “red lines” on Iranian behaviour seem to have progressively retreated. To date, neither the shooting down of US drones, the hijacking of western vessels in the Mideast Gulf nor Saturday’s attack on the heart of Saudi Arabia’s oil and gas sector seem to qualify as an Iranian “step too far”.

At the time of writing, US secretary of state Mike Pompeo and UN officials are en route for Saudi Arabia, with the US calling for a firm UN Security Council response to the attacks. Russia and China could veto any muscular Security Council proclamation that they see as overly critical of Iran. Nonetheless, it’s premature to dismiss the likelihood of military action altogether.

So far in 2019, emerging signs of global economic malaise and resilient US shale oil supply have capped the upside for crude. Indeed, outright recession in 2020 or 2021 risks challenging a prevailing $50/bl price floor cultivated by Opec+ production restraint. Unfortunately, this week’s attack on Saudi Arabia could prompt a short-term price spike that risks triggering recession all the sooner.