Sour crude prices at the US Gulf coast are shrinking to levels unseen since at least 2017.

Heavy sour Canadian crude prices at the US Gulf coast are seeing the widest spread to the basis of CMA Nymex since the March 2018 trade month, with Argus-assessed October Western Canadian Select (WCS) averaging a discount of more than $4.30/bl as of 13 September 2019. Prices are under pressure from weaker demand in a rising supply environment, as a major outlet in Motiva’s 600,000 b/d refinery in Port Arthur, Texas, undergoes scheduled maintenance. 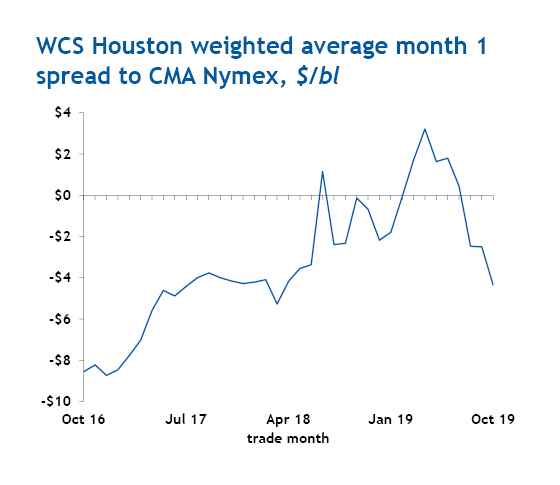 This drop in demand has impacted other sour crude markets. Medium sour Southern Green Canyon at the Texas coast is averaging a $1.88/bl discount to Louisiana’s sour bellwether Mars for October delivery, the widest discount since July 2014.

Increases in coastal heavy sour supply are expected to continue, as crude-by-rail activity builds momentum alongside the easing of the Alberta government’s crude curtailment program. Cenovus has recently announced plans to more than triple its railed crude flows from Canada to the US, to as much as 100,000 b/d by the end of this year. Alberta has extended the duration of the crude curtailment program into 2020, despite provincial inventories being whittled down to levels not seen since late 2017, with the government citing a lack of progress on export pipelines. 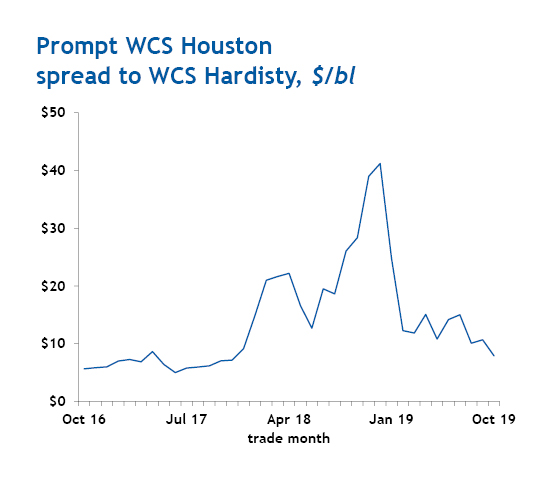 Prompt WCS Houston averages a $7.90/bl premium to WCS at Hardisty, Alberta, the narrowest spread since the November 2017 trade month. The crude curtailment program and decline in inventories have supported prices in Alberta, with crude-by-rail movements adding even more bidding interest.

Although railed crude arbitrage between Hardisty and Houston is unfavourable for most market participants at less than $15/bl, companies such as Cenovus and MEG have stated their intentions to ramp up rail movements despite thin margins. Rail transportation has a dual effect of supporting prices in Hardisty while pressuring prices in Houston, in turn hurting rail arbitrage economics.

Podcast: Although historically popular with US midcontinent refiners, West Texas Sour (WTS) has had to change with the times and learn new tricks as both a supply gap filler and a blending component.