Welcome to the second installment of our monthly blog: The US Crude Export Chronicles by Argus senior reporters Amanda Hilow (@HilowMidpoint) and Eunice Bridges (@eunicebridges12). Come back every month for Argus’ take on US crude oil exports and how they are transforming global markets.

In the week following the 14 September attack on two key oil production facilities in Saudi Arabia, no fewer than six Asia-Pacific tenders were issued listing US crude grades. Even Sri Lanka’s Ceypetco, which has never before imported from the US, issued a tender specifically seeking a cargo of WTI from Midland, Texas.

Waterborne prices surged at the US Gulf coast along with several key crude markers in the regional pipeline market. WTI fob Houston and secondary benchmark WTI Houston both hit multi-month highs by mid-week on the flurry in buying activities. 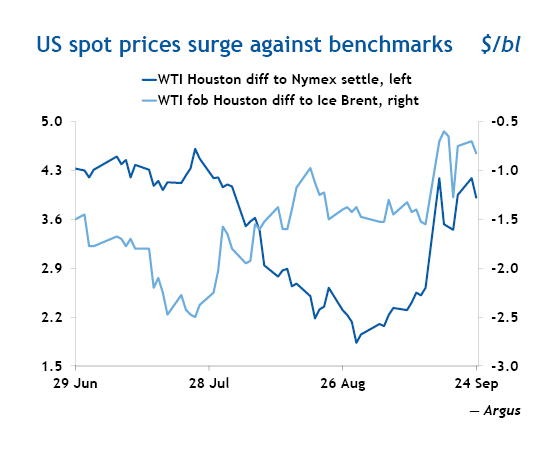 Even China was seen booking cargoes despite having already backed out of several others earlier in the month when Beijing implemented a new 5pc tariff on US crude imports in the latest escalation of the US-China trade war.

Global crude markets will ultimately rebalance, though expectations are that near-term crude flows from the North Sea will supplement Mideast Gulf supplies in Asia for prompt deliveries. In turn, US crude flows will likely surge to Europe, where WTI competes with Brent component grades like Forties.

Looking at the most recent trade data, US crude exports took an unexpected 15pc dive in July to 2.69mn b/d from the record high of 3.16mn b/d set the previous month. As a reminder, the June figure is the record monthly high, based on trade data from the Census Bureau. This is a different set of data from the weekly estimates — and we stress the word estimates — for US crude exports from the Energy Information Administration which have peaked as high as 3.6mn b/d.

As far as the US crude exports drop in July, Hurricane Barry can take some of the blame as the storm disrupted some shipping in the US Gulf before making landfall in Louisiana on 14 July. But the overall drop in oil exports was definitely steeper than expected.

South Korea remained the top importer of US crude in July with about 531,000 b/d as Asia-Pacific nations are becoming key consumers of US oil. The neighbor to the north, Canada, was the second top destination with about 420,000 b/d. And the other countries in the top five included the Netherlands, the UK and — you guessed it, China. More on that below.

In what is becoming a growing trend, another spigot opened for more Permian crude to pour into the Gulf coast. NuStar Energy, has completed an 8-mile (13km), 30-inch pipeline from a Cactus 2 connection in Taft to Corpus Christi, Texas. And that line is already in service. What does this mean? More Permian crude to the water, and more exports.

The 670,000 b/d Cactus 2 pipeline went into service last month, helping to alleviate a bottleneck of crude in west Texas. Another new Permian line that went into service last month — the 400,000 b/d Epic crude pipeline — has lowered its rates to $1.35/bl as a price war is emerging among pipelines to the coast. Several other lines, including TC Energy’s Marketlink pipeline, Enterprise and Enbridge’s Seaway pipeline system, and Energy Transfer’s Permian Express, have also lowered spot rates.

Eyes are on Chinese refiners since the latest round of retaliatory tariffs between Washington and Beijing. But thus far the reaction is not as immediate and intense as you might expect.

China imported about 229,000 b/d of US crude in July, down from 292,000 b/d in June, according to the Census Bureau. Preliminary Argus data indicates flows around this route might still hover around 280,000 b/d for August exports while just 3mn bl, or 100,000 b/d, has been seen leaving the US Gulf coast for China in the first three weeks of September.

Uncertainty surrounding Saudi Arabian supply, however, along with rising crude prices for competing crudes could counteract the otherwise bearish impact of the trade war come October.

Thanks for coming back for our second monthly analysis on US crude exports. If you missed the first chronicle, check it out here and feel free to share. Until next time, smooth sailing.

Podcast: The Saudi crude oil supply shock comes at a time when refiners across Asia were already challenged to replace sanctioned Iranian barrels.