The price of oil has plummeted, dragged lower by the confluence of massive oversupply and a demand shock as the Covid-19 virus has brought economic activity and consumption to a near standstill in much of the world.

The headline numbers are alarming enough, with front-month Brent futures — a key index for global crude prices — halving since late January to around $30/bl in mid-April. But while it is a useful bellwether of market sentiment, no-one can refine a barrel of cash-settled Brent futures, and the physical oil market provides even grimmer signals of where clearing prices really are.

The front-month Brent futures contract is currently for June delivery, and the physical benchmark — Dated Brent, or North Sea Dated in Argus terminology — covers a point much nearer on the forward curve. It is based on trade of cargoes loading between 10 days and a month ahead, currently clustered around late April and the first half of May. With the forward curve in vertiginous contango, as prices for prompt deliveries maintain steep discounts to those further forward, it is not surprising that North Sea Dated is currently valued almost $10/bl below June Brent, at an outright price of a little over $20/bl on 14 April.

But this does not tell the full story, as most Atlantic basin grades of crude are trading at deep discounts even to this reduced price. Brent itself is currently assessed by Argus at $3.80/bl below Dated, while Algerian Saharan Blend and Nigerian Bonny Light are at around $5/bl below the benchmark, and Caspian CPC Blend close to a staggering $11/bl discount, when calculated on a fob basis, putting its outright price below $10/bl. 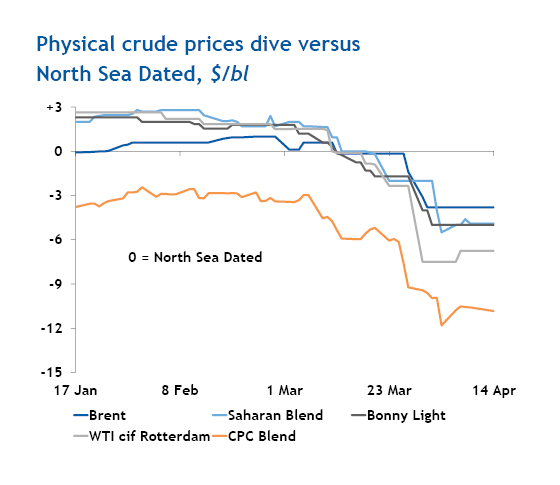 What does it mean when prices of similar grades are so far below the benchmark that is supposed to represent them?

The fact is that regional refiners simply cannot buy enough of these grades to support their prices, as unprocessed crude and unsold products fill up storage tanks, refinery run rates slow and some refineries stop processing altogether. The narrowing of Brent’s discount to Mideast Gulf benchmark Dubai and high freight rates have also meant that fewer Brent-related cargoes can relieve the pressure by making the journey to Asia-Pacific. In addition, crude is still being delivered to northwest Europe from sources beyond the North Sea, notably the US, and pricing on a delivered basis is helping to establish the true clearing price in the region.

Argus’ latest assessment of Permian-quality West Texas Intermediate (WTI), on a delivered Rotterdam basis, is $6.75/bl below North Sea Dated, showing how deep US exporters are having to discount their crude to clear supplies.

The collision between oversupply and crashing demand has hit just as the North Sea pricing complex, of which Brent futures are the tip of the iceberg, is undergoing an existential crisis of its own. Can it carry on in its current form, or does it need to look to the delivered market for more reflective regional pricing signals?

For over a year, Argus has been promoting an alternative Dated concept, called “New North Sea Dated”, that takes account of delivered grades such as WTI, Bonny Light and Qua Iboe, as well as the regional North Sea basket crudes Brent, Forties, Oseberg, Ekofisk and Troll.

What we have seen for much of that period is that New North Sea Dated tracks in line with the traditional Dated benchmark, but at times when strong demand from Asia-Pacific draws more Forties cargoes east of Suez, leaving less North Sea crude available for the regional market, it moves to a discount.

Over the past month a more sustained spread has opened up between the benchmarks, as New North Sea Dated has been pressured by the heavy discounting of delivered WTI (see graph). The spread currently stands at around $3/bl. 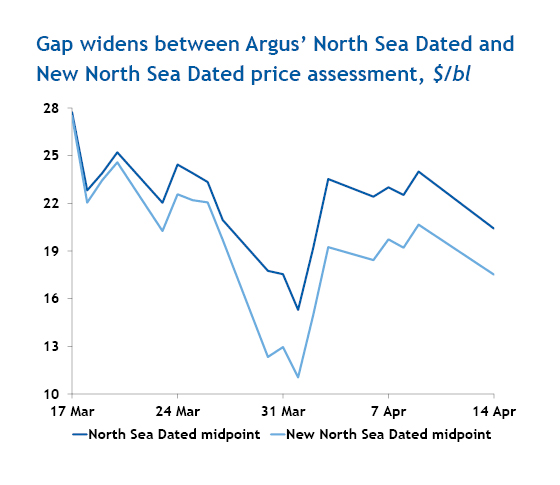 How much is a barrel of oil? When you have this much choice, the answer is — the cheapest available.

Saudi Arabia faces a pricing dilemma between supporting prices in line with the Opec+ historical deal to cut output and ensuring there is enough buying interest for the kingdom’s crude oil in an environment of dismal demand.

Listen to the latest Driving Discussions podcast, this time spotlighting the impact of Covid-19 on Nigeria's fuel market and beyond.