Nymex light sweet futures, the US crude oil benchmark, undertook an unprecedented dive into deeply negative prices on April 20 as trade for the May contract neared expiry.

The Nymex front-month price dropped from the high teens early in the morning eventually to settle at -$37.63 at 2:30pm Eastern Time.

But while the price collapse was widely interpreted as a signal that demand for crude had dried up as storage neared capacity, differentials for physical crude oil grades reported by Argus actually sprang higher to compensate for the dramatic move in the financial market.

Despite the downward price spike, there were no interruptions in trade, and the cash market adapted by pricing at differentials that reflected physical fundamentals. And key physical differentials remained in fairly stable relationships with one another. 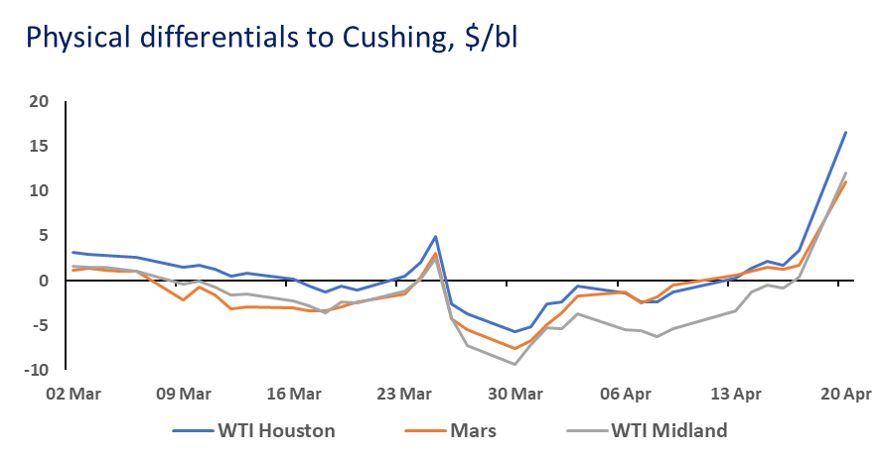 But because the Nymex dropped quickly towards the daily settlement, many of the outright prices for physical crudes were negative in the April 20 Argus Americas Crude report. Most Argus assessments in the US Gulf coast market are based on a volume-weighted average (VWA) of trades done at differentials to the Nymex light sweet crude contract throughout the day. The differentials are then applied to the Nymex price to derive the outright price of each grade.

The depth to which the May contract – which expires April 21 -- fell was also unusual because it opened up a record spread of $58.06/bl to the June Nymex contract, which settled on April 20 at +$20.43/bl.

In spite of erratic price moves for May crude, the fundamentals of US physical crude markets showed signs of rebalancing in the face of decimated domestic and international crude demand. Producers have begun announcing planned production cuts, midstream companies have warned they will not accept unsold barrels into their systems, and creative options for increasing storage capacity have emerged. Among these are the federal government’s offer to take 23mn bl from nine companies into the Strategic Petroleum Reserve domes in Texas and Louisiana. At least 25 VLCC tankers have been heard placed on subjects in the Gulf coast for floating storage. Rail cars and barges are also being considered for temporary crude storage.

Argus will continue to reflect markets as they trade in its daily price indices. Market participants are free to use these prices as they see fit in term contracts, internal transfer pricing and other applications.

Saudi Arabia faces a pricing dilemma between supporting prices in line with the Opec+ historical deal to cut output and ensuring there is enough buying interest for the kingdom’s crude oil in an environment of dismal demand.