Oil-producing countries have agreed to cut production, but a cry of “too little, too late” is still echoing across global markets.

Welcome to our monthly blog: The US Crude Export Chronicles by Argus senior reporters Amanda Hilow (@HilowMidpoint) and Eunice Bridges (@eunicebridges12). Join us every month for Argus’ take on US crude exports and how they are faring during the unprecedented market crash.

April has been a whirlwind. Opec+ finally agreed to curtail crude production by at least 9.7mn b/d starting in May, but the words “too little, too late” echo around the globe as demand continues to contract during the Covid-19 pandemic.

Global crude demand has fallen roughly 30mn b/d on the year to just 70mn b/d this month, according to the IEA, while storage levels both onshore and offshore near capacity. The overwhelmed and oversaturated market flocked to creative storage strategies, including using ships as floating storage, underutilized railcars and on-system pipeline space. But there just aren’t enough outlets to fulfill rising storage demand.

The US benchmark West Texas Intermediate (WTI) took a historic plunge into negative territory last week, falling almost $56/bl on the penultimate trading day of the May contract to settle at -$37.63/bl, setting the market abuzz with concern.

Key players in the US Gulf coast crude export market have been left in a state of paralysis as sailings from Saudi Arabia threaten to inundate the nation, while other competitively priced Mideast supplies take over market share in Europe and Asia. US shippers are being forced to load cargoes before designating an actual buyer, while others have taken to contango-based tactics involving floating storage. And yet others have decided not to export at all.

Pipeline operators who traditionally move crude to the Gulf coast for export are scrambling to find storage space amid the collapse in demand, and some are getting truly creative.
Energy Transfer is looking for ways to idle two pipelines in Texas by "moving product around" and use them for storage space by mid-May, the company told Argus. The two lines would provide about 2mn bl of storage.

Phillips 66, meanwhile, is offering “on-system storage” on its Gray Oak pipeline from the Permian basin to the US Gulf coast, citing an urgent need from shippers. And Enterprise Products Partners came up with its own creative tariff — offering spot service on the Seaway pipeline system from Katy, Texas, to Cushing, Oklahoma — the opposite direction of the line’s usual movement.

These are all distress flares as crude exports tumble, adding to the storage glut.

The crude market should treasure the February US crude export data — it will likely be the record high for some time. Domestic crude exports averaged about 3.7mn b/d in February, with the Netherlands as the top destination, according to the latest monthly trade numbers.

The drop in US exports to South Korea could be a sign of things to come as monthly data catches up to reflect the Covid-19 pandemic’s brutal impact on demand. South Korea's intake of US crude in February plunged by 42pc from the previous month.

China’s imports of US crude remained at zero, which was not a surprise. 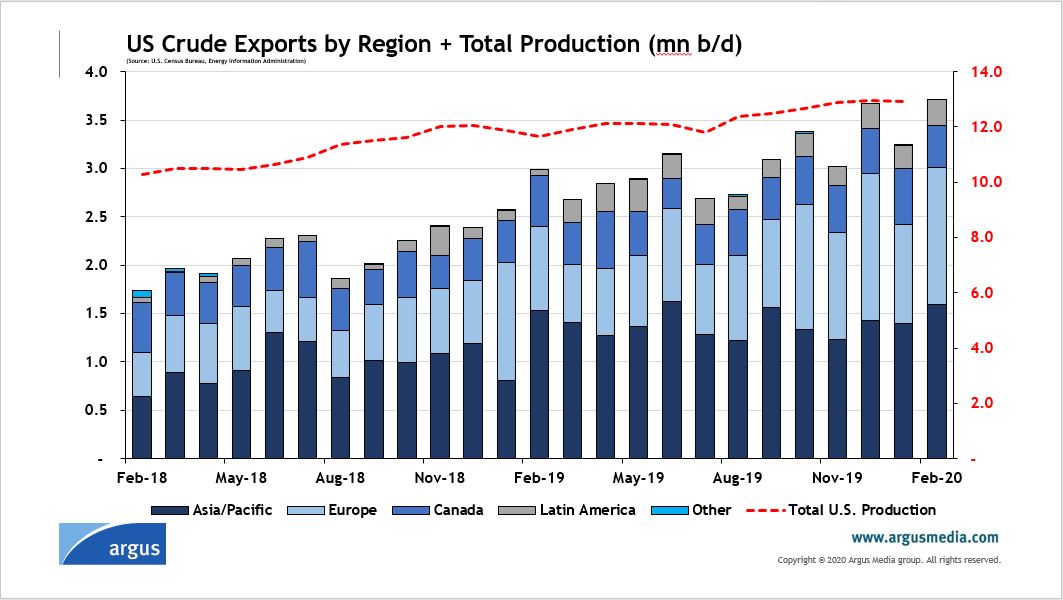 Earnings season is upon us with several big midstream companies set to report first quarter numbers in early May. The outlook is not a pretty picture as some midstream firms have already announced steep cuts in capex including NuStar Energy and Plains All American Pipeline. That trend is bound to continue.

Key domestic players have indicated the largest drop in US crude output should appear in May, with or without a regulated curtailment by oil regulators, as producers stare down the barrel of breakeven costs and move to slash spending across the board.

The decline may be exaggerated again in May as light sweet waterborne crude prices at the US Gulf coast have fallen to sharp discounts to key coastal benchmarks, indicating exporters have to swallow dock and loading costs on their own before sparking a deal in the global market.

We hope to see you again for next month’s analysis on US crude export flows and dynamics. The waters are rough, but we wish you smooth sailing.

The US Crude Export Chronicles: March 2020

The future of US crude exports is at risk as the coronavirus pandemic caps oil demand globally, while prices collapse amid the looming flood of Opec+ crude supplies in April.