Cheryl: Hello, everyone and welcome to this podcast episode from Argus, a leading independent provider of energy and commodity benchmarks. Today, we will be discussing the changing and challenging landscape in Canada's crude oil sector. I'm Cheryl Goodwin and I work with the Argus business development team based in Calgary. With me today is Jeff Kralowetz, Argus' Vice President of Business Development for crude and NGLs. Jeff, Canada has been in the news this week with the announcement that the Alberta government will be a partner in the Keystone XL Pipeline project, a long-awaited pipeline that will deliver crude from Alberta to the U.S. Gulf coast. But we'll come back to that later.

More urgently, in the industry, is facing some key essential challenges to the new low price environment. We hear a lot of talk around the price of Canada's benchmark heavy crude oil grade at WCS at Hardisty, and you see all sorts of numbers bandied around, even on the same news cycle, some as low as $3/bl or $5/bl. Can you explain what all these different numbers mean and what's going on with the price of WCS?

Jeff: Yeah. Well, I agree entirely. There seems to be a bit of a lack of consensus about what's the real representative number for heavy crude in Western Canada. And so, as you see these news stories and studies come out, you don't always know whether they're talking about a Hardisty number or a wellhead number or the timing on that. What Argus can offer as a price reporting agency is that we're very specific about what our prices represent. And in the case of WCS, whether it's at Hardisty or Cushing or at Houston, our WCS assessments reflect actual spot trades at those locations and they're all done at a differential to the calendar month average Nymex futures price. And so, at least we know what those prices represent.

And it might be interesting just to see what trends we've seen: after the first day of trade in Canada for May deliveries which was April 1st, we had WCS at Hardisty trading at a $16 discount to the NYMEX calendar month average. So, that put the WCS at Hardisty price at $8.68 the night of April 1st. At Cushing, we had WCS trading at a $12 discount to CMA. So, that gave an outright price at Cushing for WCS at $12.68, and then down at Houston, really not much difference from Cushing. We had WCS at Houston trading at $11.74 under CMA. So, its outright price was just under $13.

And what's really remarkable about all those prices is that you only had a $4 price spread between Hardisty and Cushing. And you only had a $4.26 spread between Hardisty and Houston. So, there's no way that you could justify paying the $8 pipeline fee or the $15 rail transport fee to send Canadian crude into the Southern U.S. unless you just happen to have a lease on a tank at Port Arthur or Cushing. 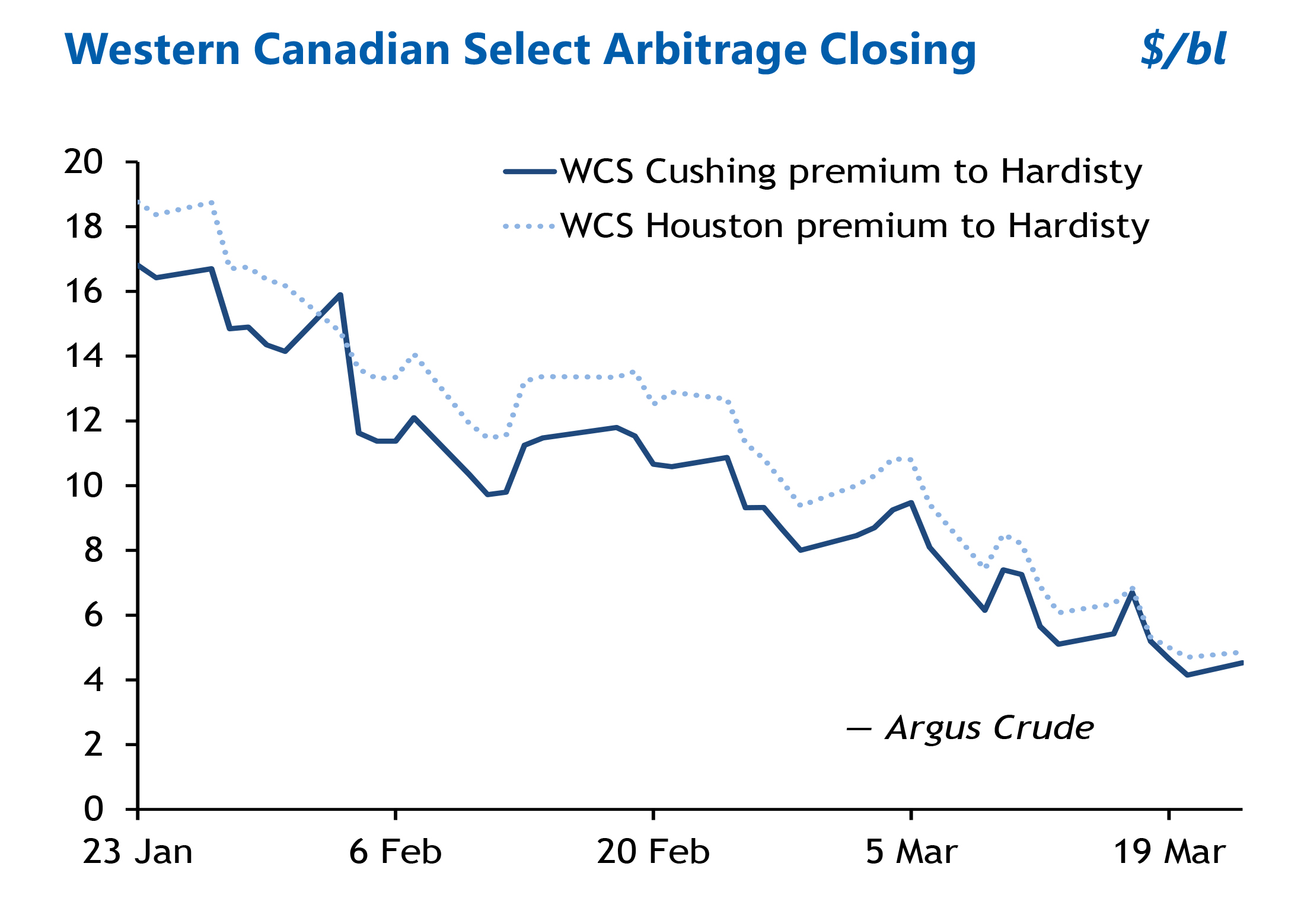 Cheryl: So, why has the arb collapsed when it's been so consistent over the past year?

Jeff: Come By Chance is the only refinery closure that we're aware of at this point. But looking back at the data from the EIA in the United States the last week of March, we saw a fall in refinery throughputs of 900,000 b/d. So, almost you know, a 1mn-b/d cut, which is pretty significant. Most of the refineries have already optimized for distillate production because jet fuel demand is slammed, gasoline demand is down with no one traveling essentially. But you know, you still have truck fleets that need distillate, you still have some marine fleets that need distillate. So, what we're seeing is overall cuts and runs and kind of focusing as much as possible on distillate output.

Cheryl: Well, with refineries closing or cutting runs, if I'm a producer, there are really only a few other responses I can have. I can preserve cash through not drilling and delayed facility turnarounds or I can keep the oil in the ground through complete or partial shut-ins. The other option I guess would be storage. What are you seeing around the storage numbers in Canada and this week's storage levels in the United States?

Jeff: The U.S. storage for the last full week of March was 13.8mn barrel build in storage and 3.5mn of that build happened at Cushing. And so, if we continued at that rate, we would fill up Cushing by the beginning of June. So, that's just a snapshot because the same kind of trend is happening in Canada as well where in raw numbers there's less storage than in the United States. An interesting thing that we've seen develop in the U.S. in the last week is that midstream companies that run the pipelines are requiring their shippers to cut back on the amount of crude that they send through their systems. So, remains to be seen whether we see that happen in Canada.

Cheryl: Well, we're hearing numbers of around 20pc of production that's going to need to be cut. That's around 800,000 b/d here in Canada. Where do you think that would come from? Like probably, mined and upgraded bitumen or conventional? I can't see a lot of thermal actually being shut-in in the oil sense.

Jeff: Well, one of the biggest headlines we've seen in the last day or two is that the operators of the Fort Hills mining and upgrading bitumen project, which opened just in September of 2018, are considering taking that project offline entirely. Suncor, one of the partners had already said they would take one train off. They may close the whole thing down. And it's interesting that it is likely that we would see proportionately more of the cutbacks come from mining rather than the thermal bitumen production, where you really have to maintain heat and pressure in the reservoir or you could damage the reservoir permanently. That said, there have been some cutbacks in the thermal production. Athabasca, Leismer and Hangingstone have said they're cutting back. Husky at one of its thermal production units has talked about cutbacks. And then, of course, there's the conventional producers who may be shutting in some wells.

Cheryl: Well, thanks, Jeff. It's rather a grim state that we find ourselves in these days. For some better news and for our international listeners, I'd like to go back to the long-term solutions for Canadian oil and that being takeaway capacity. We started this podcast off with the news out of Alberta about the provincial government investment into Keystone XL. Why don't we revisit where these projects and different pipeline projects are currently at in their development? 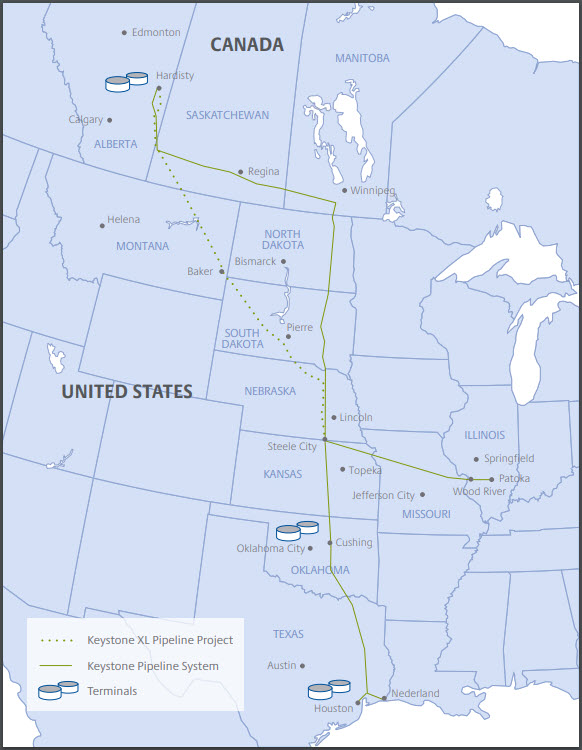 Jeff: Yeah, absolutely. You're right, Cheryl. This is a project that was first proposed in 2008. And so, it's been a long time coming. What the Alberta government said is they would provide $1.5bn of investment this year to get construction going and follow it up with $6bn of loan guarantee to TC Energy next year and TC Energy is the operator. So, the idea is that construction was to have started on April 1st particularly on a section that crosses the U.S.-Canadian border. What a lot of people don't know is that the southern half of this project, which runs from Western Canada to Cushing to the Gulf coast, the southern half of that is already complete. And there's about 700,000 to 800,000 b/d of capacity on that section of the line between Cushing and Nederland, Beaumont and with a lateral going into Houston.

So, this project is already kind of underway. It has a lot of potential to get to U.S. refineries, get Canadian crude there as well as on the water. But the drawbacks are that there's still a lot of litigation against pipelines in the U.S. including against the Dakota Access Pipeline, which was built three years ago. And it also kind of increases Canada's reliance on the U.S. market by building yet another line to the Gulf coast.

Cheryl: Well, some bright news is that the Enbridge's Line 3 looks to finally be sailing towards completion. And for our listeners in the Asian market, how is the Trans Mountain Expansion progressing that would allow additional access finally to Canada's West coast?

Jeff: Line 3 is probably the best news that is an upgrade of an existing pipeline to 760,000 b/d. It looks like it's going to get done by the end of this year. It brings Canadian crude into Superior, Wisconsin. And that's important because once you get it there, you can get it to Patoka in southern Illinois and on a reversed cap line, which is a 1.1mn-b/d line that's going to flow from southern Illinois into Louisiana. So, that's really part of what could be a whole new pathway to the coast for Canadian crude.

And then TMX, which is a line that has operated since 1954, is expanding. And that expansion project was purchased by the Canadian federal government from Kinder Morgan in 2018 in order to help get it done. There's still lots of litigation and public opposition to this project, but it is supposed to be complete by December of 2022. And currently, only about 50,000 b/d leaves Vancouver as waterborne export of Canadian crude, usually Cold Lake or another heavy grade. Once this project were completed, if it is completed, you would see hundreds of thousands of barrels a day getting onto the water and presumably going to China, Japan, South Korea.

Cheryl: Well, it would be great to see the capacity issue finally resolved as long as these lines can get completed and actually stay in service. Thanks, Jeff, and thank you all for listening. If you're interested in additional information, please check out the news and insights tab found on our website at www.argusmedia.com and on streaming services such as Apple Podcasts, Google Play Music, Stitcher, and Spotify. Thanks again, and we hope you enjoyed this podcast.

From the Economist's Chair: Opec+ isn’t over until it’s over...

British Labour Prime Minister Harold Wilson said during the 1960s that “a week is a long time in politics”. If so, a month seems like an eternity for an oil market buffeted by coronavirus and the Opec+ fracturing that took place on 6 March in Vienna.

Podcast – Upside down: New price relationships in the US Gulf coast crude markets

Podcast: Long-stable crude oil price relationships at the US Gulf coast have been upended by the global crude supply/demand imbalance.