Listen now to learn about the impact of the virus on port and supply chain logistics, fertilizer import demand, local production and outstanding purchase tenders on the African continent. 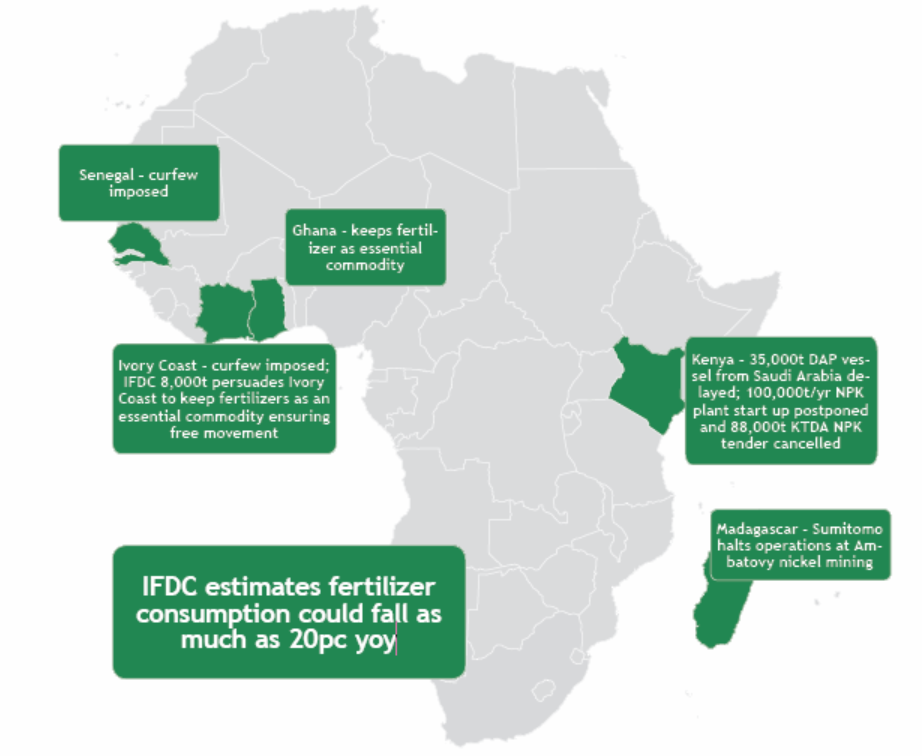 So, welcome to this podcast on the state of the African fertilizer market and particularly the impact of COVID-19, or Coronavirus. I think it's important to stress at the outset that it is very early days in the pandemic that we've seen in various parts of the world, obviously, Southern Europe, Northern Europe, and the U.S. The pandemic is going through different countries at different rates and affecting regions in very different ways. Africa is yet to sort of record a massive pandemic on the scale that we've seen elsewhere.

But obviously, the fear is that it is only a matter of time, and given that the size of the population, the relatively underdeveloped health systems that we have in some of the poorer countries, and the concentration of population all lends itself to considerable concern. But at the moment, it's important to say that the impact on the fertilizer market has been relatively small. There have been impacts on oil and crop markets. There's been a lot of impact on local currencies. We've seen this in Kenya. We see there's been weakness in the South African Rand as well, which has made imports more expensive.

But in the main, most of the fertilizer markets, particularly on the west and in the east, the big ones, have done most of their importation. So the impacts we're seeing are more in terms of curfews that are in place in countries such as Senegal and the Ivory Coast. Although again, these are largely fourth quarter and first quarter import markets. We've seen it too in Rwanda, Kenya, Democratic Republic of Congo. And as a result of that, you're seeing logistical issues. So there's been certain ports that have imposed increased restrictions, which is slowing the rate of discharge and also limiting movement of fertilizer from the ports into the supply chain.

And there are some specific examples of that, which we'll get into a little later. But the vast majority of the import requirements and demand has already been met. IFDC, we spoke with last week, they estimate that between 50% and 70% of the fertilizer needed for West Africa are actually already in place in countries like Ivory Coast, Benin, Burkina Faso, with the various tenders that were covered and awarded back in the fourth quarter of 2019. Also, both the east and the southern parts of Africa tend to apply their fertilizers in the second half of the year, so there's a little bit of a lag yet.

And also western Africa has secured most of its NPKs. Burkina Faso and the Ivory Coast have plenty of stock. South Africa has adequate urea stocks. Obviously, that has now entered a three-week lockdown back on the 26th of March, although the market is now off season. We were in Cape Town in February, and there weren't any real concerns in terms of sourcing material at that time. There is a little bit of delay of shipments against the Mali CMDT tender. That's a little bit behind schedule. But Tanzania also bought heavily on urea back in the fourth quarter and the first quarter of 2019 and 2020.

In terms of direct impacts, the most notable consequences of Coronavirus, mainly in Kenya so far, we saw the Kenya Tea Development Agency, the KTDA, cancel its 25th of February tender to buy best part of 90,000 tons of 26-5-5. That's been postponed indefinitely. And KTDA specifically mentioned that it was unable to proceed with the tender because of uncertainty surrounding the disruption forced by Coronavirus and the ability to supply and then ship through the supply chain.

Also in Kenya, there was a 100,000 ton a year NPK steam granulation plant the MEA was meant to be commissioning in Nakuru. And that's specifically because of a lack of Chinese engineers. So the tests at the Fertiplant facility were meant to start in, well, anytime now, March, April time. But the Coronavirus outbreak delayed the return of Chinese engineers to Kenya, because of the Chinese lockdown. So that's a very specific impact. The return date isn't known. They are looking at new personnel to complete the work, and perhaps, tentatively, test runs may start in June or July, but that's been delayed.

Also in Ivory Coast, the government failed to classify fertilizers as a strategic commodity, which meant that movement from the port of Abidjan, fertilizers in trucks that was being imported, was blocked for a few days. And it actually took a letter from the IFDC to ECOWAS, which persuaded the Ivory Coast to reclassify fertilizers as a strategic, or essential commodity. So that did impact, and I think there's a very strong message from the IFDC, which has called on ECOWAS not to subject fertilizers to any kind of restrictions on importation, distribution, or use within those 15 member countries. So they actually sent a letter to the ECOWAS.

The ECOWAS is the Economic Community for West African States. And they sent a letter to the commissioner for agriculture on the 1st of April, which underlined the importance of maintaining agricultural production and avoiding a food crisis in the West Africa region. So this meant that all fertilizers, both organic and inorganic, should be considered "a strategic product without borders" during the Coronavirus pandemic, and also, as originally decreed under the Africa Fertilizer Summit, which sought to bolster the usage and consumption of fertilizers, the Abuja, the so-called "Abuja Declaration," way back in 2006.

So the IFDC recommendation was that this should apply to all port activities, including manufacturing, blending, logistics, and domestic, and also, very importantly, interregional trade. There's a lot of interregional trade, so one import country may take product partly for a landlocked country further within the African region. And also, they wanted to bolster the rights of distributors and retailers actually, at the farm gate level, to supply agricultural producers with those fertilizers and maintain food production.

So in conclusion, I think, it's very important, it's an obvious statement, but markets are very much driven by sentiment and by perception. And any pandemic in Africa is going to create major challenges for a region that has poorly equipped health services. Africa has a disproportionately vulnerable population due to HIV, malnutrition, overcrowding, which would be a breeding ground for the virus. And I think that's very much the concern, that if the virus takes hold of these areas that the impact will be disproportionately larger than it would be in more developed nations.

But the governments in Africa have moved quickly. They've imposed stringent measures to curb the spread of the virus. And some have actually argued that Africa, having faced multiple previous pandemics, such as Ebola, Lassa fever, could be better prepared in some respects. But obviously, the hope is that it doesn't come to that. I think the concern for the fertilizer market, and why bodies like the IFDC have come out with the statements that they've made, is that there is a concern about a sudden knee-jerk change of policy from those governments that are keen to avoid any kind of civil unrest.

I think there's been a degree of sensitivity to the fact that it's very difficult to ban outright movement of people. And some of the approaches that governments have taken haven't been the same as you've seen in terms of the lockdown, because of the, you know, the black economy, the more informal working practices that Africa employs. But banning fertilizer imports, or limiting internal movement creates all kinds of problems, and will impact the fertilizer market very quickly. I think there's also a concern that as the pandemic takes hold, their governments will reallocate their budgets, which could yet lead to more delays in more tenders.

Now, we're still some way away from some of the big tender seasons, particularly in West Africa, and also in places like Ethiopia, which really don't kick in until August, September, October. So we're quite a long way away from that. But again, it's not just the logistical impact that could be an issue, but also the allocation of funds from governments who've got more pressing needs. So, I hope that's been a useful little introduction. Obviously the situation is, as many people have said, very fluid.

We will be watching this market very, very closely, and obviously we hope to bring you more news as and when we get it. We're working closely with the IFDC actually in terms of helping spread the word and giving more regular updates. But in the meantime, stay tuned to argusmedia.com. And once again, my name has been Mike Nash, senior editor, fertilizers, at Argus. Thanks very much.