Sentiment may be shifting to the upside for a US shale sector that recently took a standing count, but is it premature to herald fledgling recovery for a sector battered by collapsing demand, slumping prices, capital starvation, bankruptcies and an incoming Biden Administration much less hydrocarbon-friendly than its predecessor?

With NYMEX WTI topping $46 after the Opec+ Ministerial meeting, some are proclaiming a potential new sweet spot for US shale production, re-enforced by reports of renewed producer hedging.

While longer dated prices have flipped into backwardation, there seems to be support here too near $45, generating reassurance for producers that firmer prices are at hand. 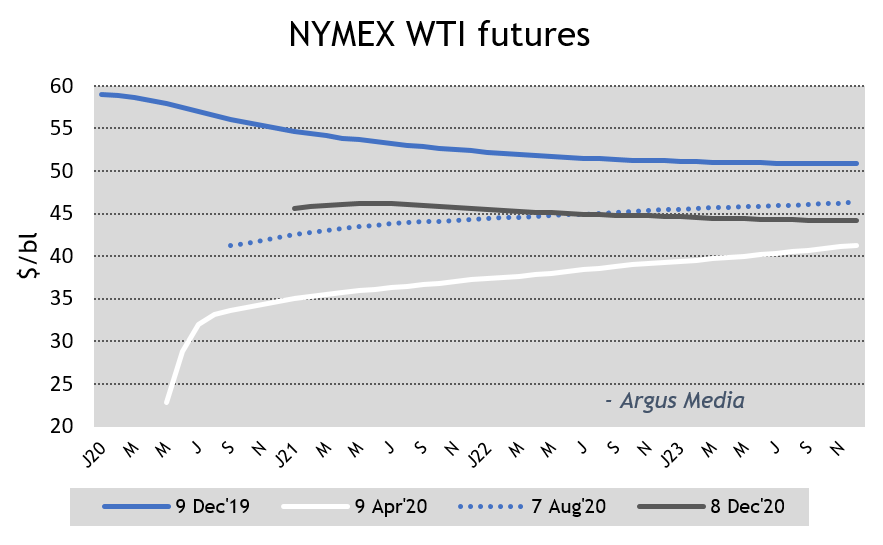 Although increases in the US oil rig count have thus far been tentative, a growing stock of drilled but uncompleted wells (DUCs) in the Permian Basin during October/November holds the potential for a relatively quick boost to production.

Indeed, while the Federal Reserve Bank of Dallas September industry survey pointed to $50 as the consensus take-off point to encourage substantial new drilling, DUC completions were seen benefitting from a rather lower break-even of $45-$50.

Moreover, the Fed’s break-evens are seen by some analysts as overly-pessimistic, with stubbornly low rig costs apparently encouraging higher activity levels than these broad indicators would suggest.

Attendees at a recent Oxford Institute for Energy Studies (OIES) Oil Day heard that activating these DUC wells while service crews and fracking equipment remain cheap is something of a no-brainer for producers with any cash to spare.

Nor it seems has the scope for further cost reduction and efficiency improvements in the shale space been exhausted. Frac sand process improvements and enhanced well predictability, via better data and diagnostics, were highlighted as key areas that producers are now focussing on.

Moreover, typical decline curves in 2020 have not turned out markedly steeper than in 2019, even if the drilling collapse has caused legacy well decline to outpace new production in recent months.

Participants also discussed a seeming convergence of price expectation and tolerance among producers around $50/bl crude. Opec+ Ministers might ideally prefer higher prices for domestic budgetary purposes but, it was suggested, can live with $50 so long as this prevents earlier 1mn b/d-plus levels of annual US shale growth.

A Wall Street Journal report in November also noted that ExxonMobil has lowered earlier price expectations for the next decade from $60-$70/bl into a range nearer $50, in line with IOC peers.

The catch for Opec+ is that for those top-tier producers in Texas, Oklahoma and North Dakota with continued access to capital or an ability to self-finance, $50 works very nicely indeed.

However, potential political headwinds for shale from an incoming Biden Administration are considerable. The biggest short-term threat may come not from widely touted drilling bans, corporate tax increases or EV subsidies, but rather via potential US re-engagement with Iran.

An incremental 1-2mn b/d of Iranian oil, hitherto off the market due to sanctions, is as unappetising a prospect for shale producers as it is for Saudi Arabia and its Opec+ colleagues.

Fledgling 2021/2022 demand recovery may not be sufficiently robust to absorb those volumes without stalling stock draws and pushing prices lower again.

Rather more likely though, the Rouhani government could be prevented by conservative opponents from reaping the benefits of a rapid restoration of exports and revenues before Iranian Presidential elections in June.

And in any case, the JCPOA deal itself will not be easily renegotiated in less than six to nine months, at best.

Over the longer term, both domestic US oil demand and the investment environment for US oil production will likely be challenged by a new political/financial landscape which prioritises de-carbonisation and ESG concerns.

Nonetheless, the full force of a “Blue Wave” assault on upstream oil and gas looks to have been avoided in the short term, unless Democrats upset the odds to capture control of the Senate in January.

Nobody would pretend that US production is “back to the races” at $45-$50 per barrel (albeit, ironically, the turbo-charged growth of 2017-2019 was itself achieved with WTI averaging only slightly higher, near $55/bl).

Consolidation, mergers and bankruptcies will likely continue in a sector becoming more concentrated, both in terms of its range of players and its geography. 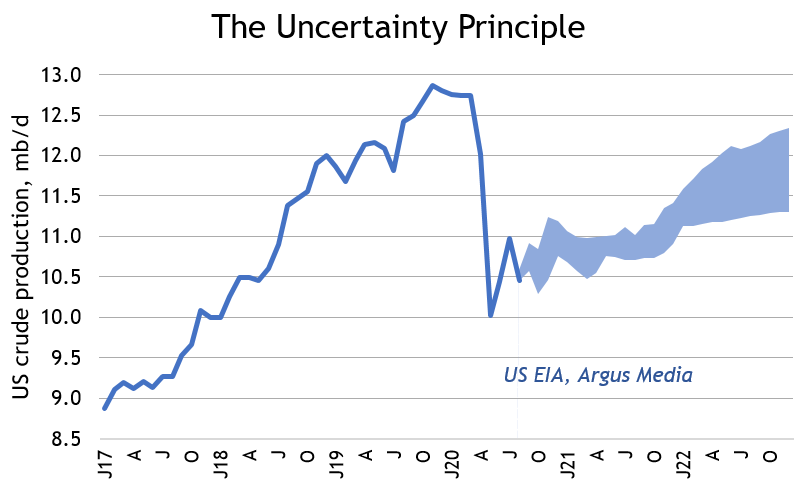 Renewed annual year-on-year US crude supply growth could be deferred to late-2021 or 2022 and most industry forecasts see a much shallower trajectory ahead than the +1mn b/d-plus annual growth seen in 2017-2019.

But nor should the resilience and adaptability of this remarkable slice of non-Opec supply be discounted either. It is perhaps fanciful to attribute the recent Opec+ “sticking plaster” deal to anything more than the need for compromise. But that’s not to say there wasn’t also a touch of Machiavellian calculation too.

One intriguing result of last week’s rather inconclusive decision – intentionally or otherwise - is that Opec+ attempts to micro-manage the market, possibly on a monthly basis, will surely intensify price volatility through 2021. This will make US producer hedging both more complicated, and more necessary.

In this episode of The Crude Report, we look at oil markets through the prism of China, where life seems to generally be back to normal, as even their energy consumption has come roaring back.