Without tariff free access to the EU market, UK barley prices could be pulled lower for typical consumers in the animal feed and brewery sector in the short-term, while forcing farmers to diversify into other grains – or out of the market all together, in the long-term.

The UK’s Department of Agriculture and Rural Affairs (Defra) forecasts UK barley output to reach around 8.36mn t this year, which would be the country’s largest crop size since 1988. And when existing stocks are added to this, total availability for UK barley is expected to peak at 9.77mn t for the 2020-21 marketing year (July-June), up by some 560,000t year over year. 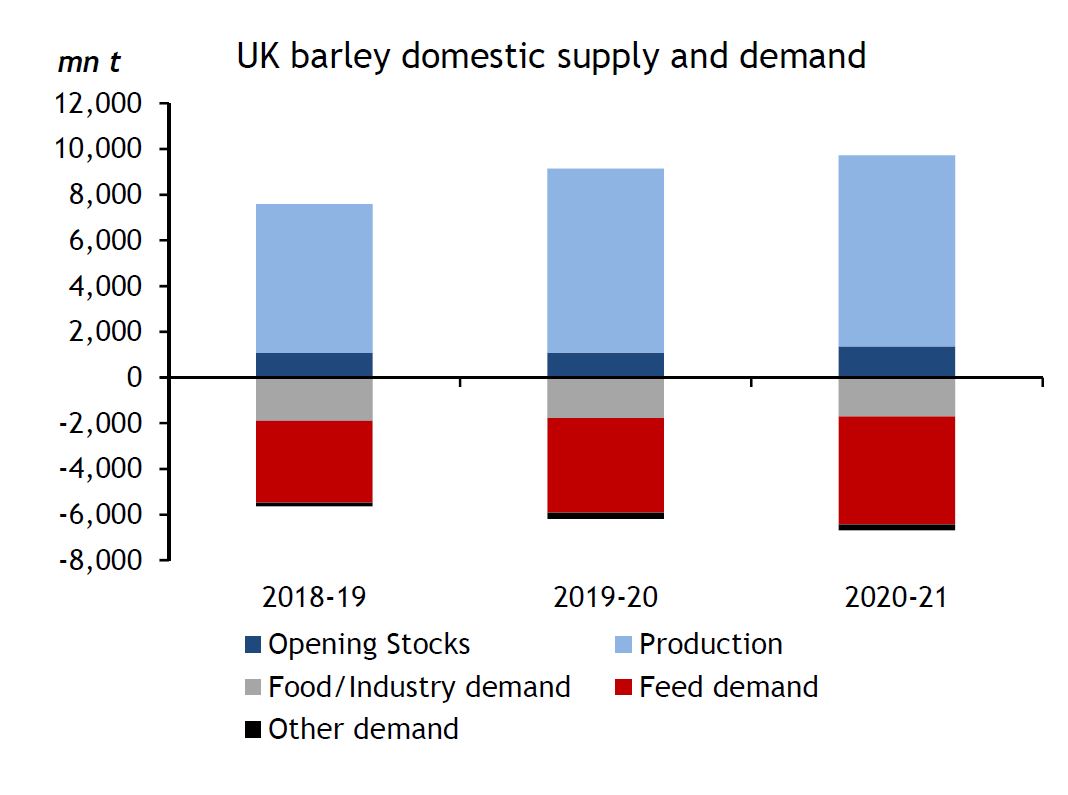 Domestic barley demand is much too small to offset this sizeable harvest, especially given the large slumps in buying interest from the hospitality sector this year which have been caused by the continuing Covid-19 pandemic. Some 74,000t has been shaved-off the UK’s food and industrial use demand on the year, putting UK consumption of barley at only around 6.7mn t for 2020-21.

In terms of exports, this leaves the UK with an estimated surplus of around 2.28mn t this season, when accounting for an operating stocks requirement of some 790,000t.

Challenges for shipments to the EU

Deliveries to the EU are an obvious choice for this year’s surplus. The bloc already accounts for some 91pc of the UK’s barley shipments based on a five-year average. Shipments reached 1.38mn t during 2019-20, and around 811,000t the previous year period. 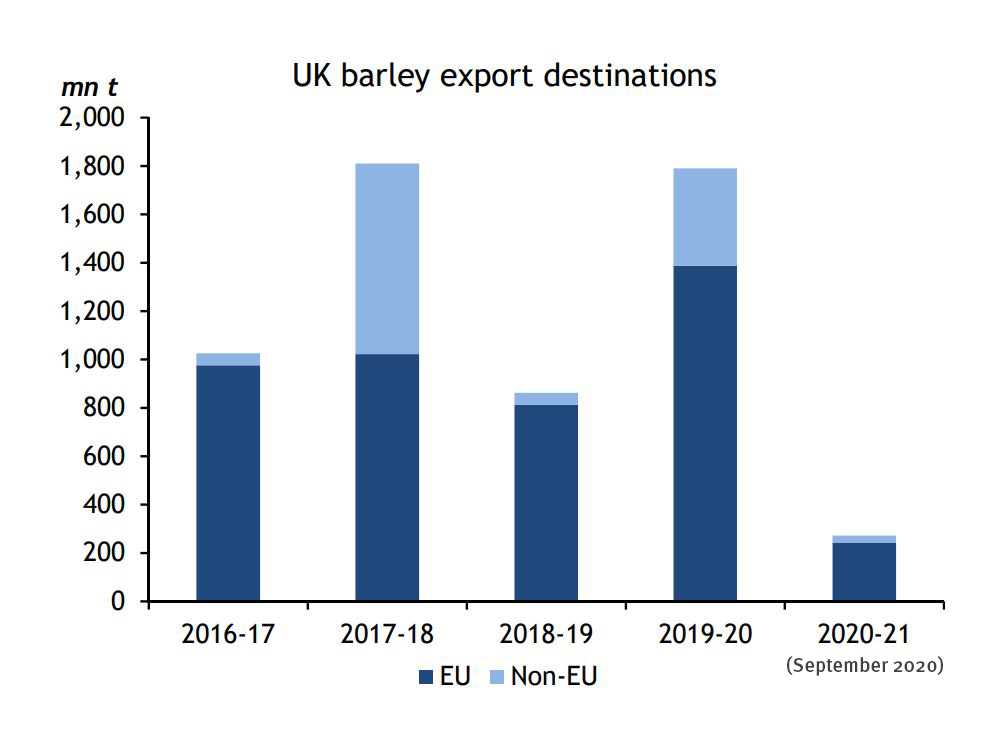 But export routes to the EU could narrow in the absence of a UK-EU free trade agreement, and the imposition of possible import tariffs from the bloc.

Currently, the EU operates a Tariff Rate Quota (TRQ) system for its agriculture imports, pegged at between €8-16/t for in-quota shipments of malting and feed barley respectively, and at €93/t for out-of-quota shipments of the product.

Just 307,000t of barley imports are allocated to the EU’s in-quota tariff rate, which means a €93/t surcharge could apply to more than 2mn t of UK barley – if it attempted to ship more than 90pc of its surplus to the bloc again.

This surcharge would almost certainly squeeze UK suppliers out of their largest market, who would face considerably greater export costs than competing countries located within the EU.

Beyond the EU, opportunities have presented themselves this year to the UK for barley exports to China and MENA regions, owing to stronger demand for animal feed use barley given amid a rising discount to feed wheat.

But the UK is already facing heftier competition for these markets from European and Black Sea suppliers. Low-cost barley suppliers in Ukraine and Russia have exported some 3.7mn t and 3.5mn t since July, up by 105,000t and 1.4mn t, respectively, on the year.

This compares to UK exports amounting to only 240,000t over July-September, which is already down by some 380,000t on the same period last year – despite this year’s bumper harvest.

The outcome of the Brexit negotiations will be critical not only for the UK’s barley sector plentiful supply availability this year, but also for the country’s long-term strategic position as a net exporter.

With access to the EU export market beyond 31 December uncertain, and potential exports to other global destinations facing increasing competition, short term prospects point to weaker domestic prices for the crop, and UK farmers potentially diversifying away from barley in the longer-term.

Opportunities are available to boost domestic production of wheat and corn, where the UK is typically a net importer of both. This opportunity will be strengthened if the UK introduces tariffs on EU origin wheat and corn because of the improved margins comparatively for domestic growers.

But strong competition from producers elsewhere, such as the Black Sea region and Australia, could limit these prospects, while any tariff rates imposed on EU imports will likely be tempered by the need to prevent steep rises in domestic consumer prices.