Global base oil prices have extended their rise at a time of year when they typically face more downwards pressure. There is typically a rise in surplus supplies and a slowdown in demand before the end of the year. This time supplies have stayed tight. Demand has exceeded spot supply availability, even with a lull in Chinese buying interest in recent months. This Chinese buying interest has now revived.

But demand in these other markets has remained strong. Their firm buying interest has complicated Chinese buyers’ moves to attract more supplies to their market.

The rise in cfr northeast Asia Group I bright stock prices has stopped their discount to cfr India prices from widening any further. But the discount remained at levels that still made the arbitrage to India more attractive.

European Group I base oil prices have extended their rise even as regional demand has begun to ease and exports from the Baltic market have increased. But supplies remain tight. There has been no clear-out of surplus volumes at the end of the year. Producers have raised prices for any export supplies that they did have.

A large volume of Baltic supplies was moving to other markets like Africa rather than to Europe.

A steady flow of European shipments has also continued to move to southeast Asia. Singapore base oil imports from Europe rose to 220,000t during January-October, up from less than 55,000t during all of 2019.

The maintenance run cuts and shipments to overseas markets have left supplies in Europe tighter than usual for the time of year. 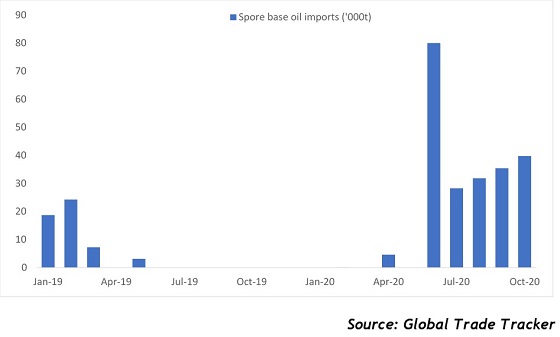 A continuing surge in cfr India base oil prices has boosted the feasibility of moving arbitrage shipments to the country from the US. But surplus availability in the US remained limited. US producers have also prioritised the shipment of supplies to Latin America rather than to India. Brazil’s base oil imports from the US rose in November to their highest level in more than 18 years.

The trend has exacerbated Indian buyers’ difficulty in covering their requirements at a time when supplies have fallen from more regular sources in Asia-Pacific and the Mideast Gulf.

Brazil’s base oil imports from US rise 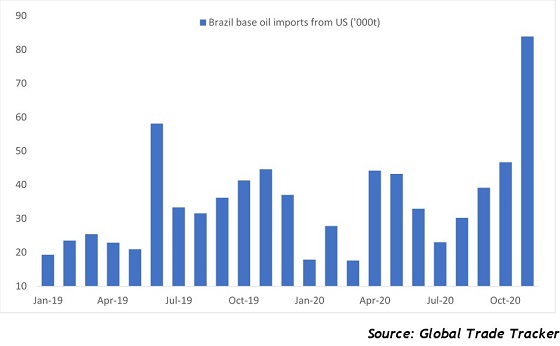