Welcome to our monthly blog: The US Crude Export Chronicles by Argus senior reporters Eunice Bridges (@eunicebridges12) and Amanda Hilow (@HilowMidpoint). Come back every month for Argus’ take on US crude exports and how they are transforming global markets.

It’s 28 days later and we’re still talking about the coronavirus. The spread of the virus has finally begun to slow in China but is now rapidly extending its reach across key industry hubs globally, including in Iran and South Korea.

Waterborne US crude prices already slid to their lowest in three months on 14 February as energy watchdog IEA slashed projections for global demand growth by 370,000 b/d for 2020 and by 435,000 b/d just in the first quarter because of the coronavirus outbreak.

But the downturn in prices turned out to be short-lived for two primary reasons. First, Opec+ stepped in to say it would cut production further to maintain global balance. And second, China leaned in on its promises from last month to boost commodity imports from the US and is now offering to waive import tariffs entirely for some refiners applying for exemptions.

But spot prices are poised to fall again if the coronavirus outbreak goes unchecked in South Korea, which was the second highest importer of US crude — surpassed only by Canada — in both 2018 and 2019 at roughly 240,000 b/d and 425,000 b/d, respectively. If the South Korean outbreak causes a drop in demand, US sellers could be hard-pressed to find a buyer for the coming quarter. 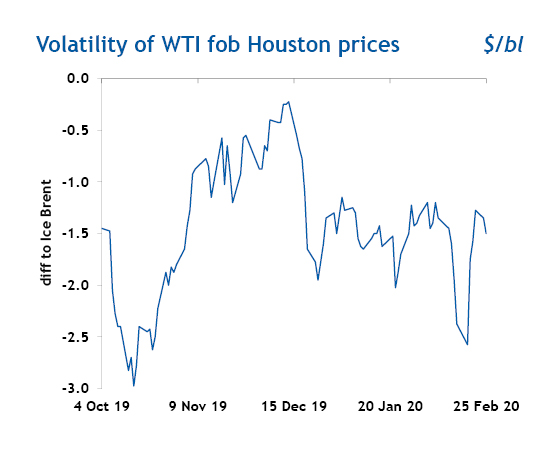 December crude exports capped the year with a bang: a record high of about 3.7mn b/d, according to the much-anticipated Census trade data. For the full year, US crude exports averaged a sliver under 3mn b/d in 2019. The big story was the shift to Corpus Christi, Texas, as the top outlet for US crude exports.

Crude exports out of Corpus Christi should continue to rise as port expansions come online this year. But one project will be delayed, and it is a big one.

Marathon Petroleum said its South Texas Gateway marine terminal will now start service in the third quarter, a delay from its previously scheduled start at mid-2020. That facility will include two deepwater docks capable of berthing very large crude carriers (VLCCs).  Buckeye Partners is the majority owner of the terminal while Marathon owns 25pc.

In other supertanker news, Energy Transfer’s Kelcy Warren told this month’s Argus Americas Crude Summit that his company is in the "cost-estimating stage" of a VLCC port connected to its terminal in Nederland, Texas. The company is examining the price of the project and determining whether it can find a customer that can justify the cost.

And it seems Magellan Midstream Partners does not want to be left out of the VLCC race. Magellan is in discussions to connect its east Houston terminal to Sentinel Midstream’s VLCC project off the Texas coast.

We are giddy with full 2019 trade data from the US Census, so we decided to highlight some interesting numbers:

On the pipeline front, we are expecting more crude to hit Corpus Christi as Epic has started deliveries on its main crude pipeline with initial capacity of 600,000 b/d. To recap, Epic decided to use an NGL line last year to carry 400,000 b/d of crude to the port as a stopgap measure until the larger crude line was completed.

January and February are expected to show a rise in US crude flows to European destinations, as WTI sales to Mediterranean refiners were heard easily topping 1mn b/d to replace lost supply from Libya during militia-led force majeures. But ongoing peace talks between the two warring factions in Libya’s civil war could ultimately bring back up to 980,000 b/d of crude to market — further displacing our favorite US grades in global markets and pressuring prices lower.

That’s it for now. We hope to see you again for next month’s analysis on US crude export flows and dynamics. Until then, smooth sailing.