The port of Corpus Christi has become the largest source of US crude exports after the start-up of new pipeline connections from the prolific Permian basin. 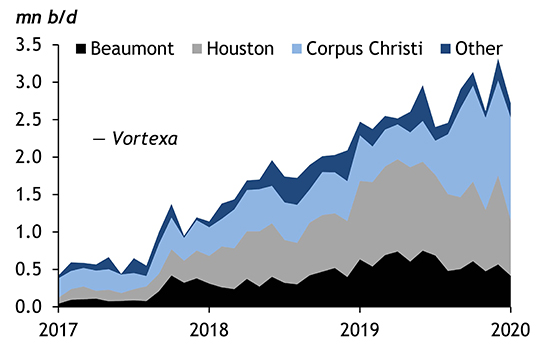 The US exported just under 3mn b/d of crude last year, nearly 1mn b/d more than in 2018, data from the Census Bureau and the EIA show. Shipments peaked in December at 3.65mn b/d, preliminary EIA estimates show, thanks largely to rising flows through three pipelines that started up in the second half of last year running from the Permian basin to Corpus Christi in south Texas.

These are the 670,000 b/d Cactus 2 pipeline, the 900,000 b/d Gray Oak pipeline and the 400,000 b/d Epic line. Gray Oak also has connections to terminals in the Houston area, although initial service was only to Corpus Christi.

The extra capacity to Corpus Christi has helped clear pent-up crude from the Permian basin in west Texas and southeastern New Mexico. Port loadings rose from less than 500,000 b/d in July, before the pipelines opened, to over 1.25mn b/d in the fourth quarter, or 42pc of all US crude exports (see graph). That figure rose to nearly 1.5mn b/d in January, preliminary loading data from analytics firm Vortexa show.

Exports from Corpus Christi are either WTI or lighter West Texas Light (WTL) from the Permian basin, as well as Eagle Ford crude and Eagle Ford condensate from the south Texas shale region.

The rise in exports through Corpus Christi has led to the emergence of a spot WTI market around the port. Crude loadings from the port in February-March have risen to parity with fob cargoes in Houston after trading at discounts of 20-50¢/bl to the Houston market in late 2019.

Sellers from the Houston terminals have had to reduce offers against the Argus WTI Houston crude benchmark to remain competitive.

Corpus Christi has some infrastructure disadvantages to Houston, such as a lack of storage and refining capacity needed to export blended crudes. But other US grades could start to use the port next year. Continental Resources plans to export Bakken crude from Corpus Christi should two new pipelines enter service in 2021.

Bakken would travel to the port through the proposed 350,000 b/d Liberty and 400,000 b/d Red Oak systems. Liberty, a 50:50 venture between refiner Phillips 66 and midstream group Bridger, will carry crude from the Bakken and Rockies to Cushing when it enters service in the first quarter of next year.

Phillips 66's Red Oak pipeline would move crude from Cushing to terminals along the Gulf coast, including to Corpus Christi. 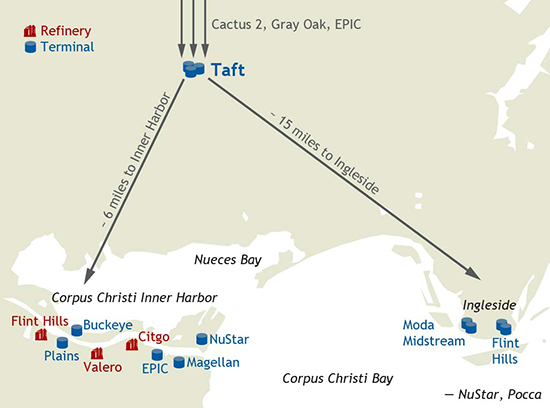 Midstream firms are also expanding storage at Corpus Christi to accommodate rising exports, and projects are under way in the nearby town of Taft, a junction for southbound pipelines (see map).

Marine port expansions will also add storage space along the shore. Moda Midstream added 5mn bl to its Ingleside terminal last year and plans another 5mn bl by May. And Buckeye is opening 8.6mn bl of storage at its new South Texas Gateway terminal in the third quarter this year.

And a dredging project under way at Corpus Christi will allow some onshore ports to load VLCCs up to 1.5mn bl, lowering the cost of ferrying crude to larger tankers offshore.