US election-year politics are again raising warning bells among the US oil and gas industry, according to speakers at the Argus Americas Crude Summit.

This year’s US presidential election could be a fateful one for the US energy industry, and its outcome could have major implications for the the country’s recently-gained status as a top crude producer.

At the Argus Americas Crude Summit in Houston, Texas, this week, former US secretary of state Rex Tillerson delivered a wide-ranging keynote address that warned US policymakers not to meddle with policies that have provided a strong tail-wind for domestic producers and exporters.

The US has risen to a position as a significant crude exporter, but that role could change with the stroke of the presidential pen, Tillerson warned. "The US supply is somewhat fragile and it can be dramatically changed with a change in administration," said Tillerson, who had previously served as chief executive of ExxonMobil. 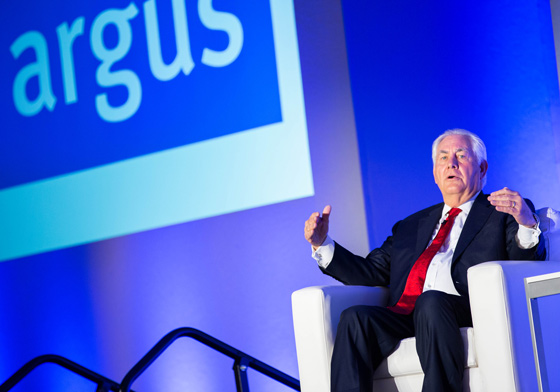 In his speech, which came hours before President Donald Trump delivered his State of the Union address to Congress, Tillerson urged Trump to emphasize the value of US foreign allies and open international markets. Tillerson also warned policy-makers to be on guard against advances by countries like China and Russia.

The remarks came as leading Democratic presidential candidates promote restrictions on the oil sector as a way of fighting climate change. US senators Bernie Sanders (I-Vermont) and Elizabeth Warren (D-Massachusetts) say they would ban hydraulic fracturing across the US.

Energy Transfer chief executive Kelcy Warren said that the prospect of a fracking ban is scary.

“I am scared to death,” Warren said. “Can you imagine if we were to eliminate fracking in the United States? It would be chaos.”

The stakes for the US energy industry are high, and the American Fuel and Petrochemical Manufacturers (AFPM), which lobbies on behalf of big US refiners, listed a potential Democratic victory in the election as the biggest potential market disruptor on the horizon.

"If you look at every major [Democratic] candidate running for president, none of them are big fans of the folks in this room," said AFPM chief executive Chet Thompson.