But it remains to be seen if the newly formed German virtual trading point (VTP) will become a highly liquid trading hub for all of Europe, or remain at the edge of a much more traded Dutch market.

Germany’s NetConnect Germany (NCG) and Gaspool are scheduled to be consolidated under a single banner, managed by Trading Hub Europe, from 1 October 2021.

With the merger little more than a year away, Germany’s network regulator, the country’s many operators and its existing market area managers have started hammering out the details, aiming for a smooth transition and trying to alleviate uncertainty.

NCG and Gaspool are among Europe’s most traded markets, only trailing the Netherland’s Title Transfer Facility (TTF) and the UK’s National Balancing Point (NBP) in liquidity. But the gap is significant and has widened in recent years. 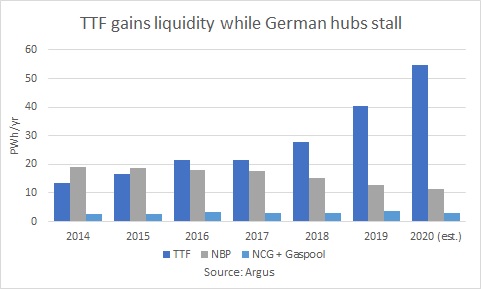 The TTF has grown rapidly in recent years, quickly supplanting the NBP as Europe’s main gas trading hub and setting a benchmark for the continent and increasingly for the global LNG market.

The rise of hub-linked indexation and a preference for euro-denominated trade, ample domestic production and direct connections to several neighbouring markets has entrenched the Dutch hub’s central role in European pricing.

Liquidity begets liquidity, and the TTF has benefited tremendously, with liquidity rising by over 45pc in 2019 compared with a year earlier, and churn rates - the ratio between the total volume of trades in a given market and the amount of gas consumed - far surpassing any other European market. More gas was traded at the TTF than burned on planet Earth last year.

But as with the NBP, there is no guarantee that the TTF will retain its leading role in the future.

Dutch gas production is falling rapidly, with the shutdown of the giant Groningen field well under way and smaller fields accelerating their long-term decline. And Dutch gas consumption itself is dwarfed by its neighbours, not least of which are the two German markets, soon to be merged into one.

NCG and Gaspool are the last market area managers left following the consolidation of Germany’s many regional markets, ending with the Gaspool’s absorption of the Aequamus market zone in 2011.

TTF and aggregate German spot trading had been roughly equal in the past, but as the TTF has become increasingly liquid, trade at the German markets has stalled.

The TTF has outpaced futures trading at the two German hubs even further. Contracts are traded much further out at the TTF than other hubs, making it the primary gas market used by companies for forward hedging.

Long-term hedging strategies are typically based on TTF contracts even if the final physical delivery is not in the Netherlands. And the high liquidity of the Dutch market provides traders with ample opportunities to hedge their exposure in less liquid markets, including NCG and Gaspool. 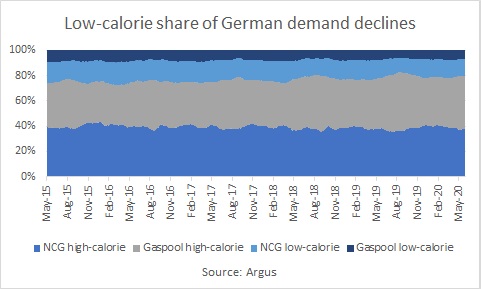 The Dutch market also has an advantage in simplicity. The German market is divided into four segments — it has two markets, with two separately traded gas qualities.

In contrast, the TTF is quality-free, meaning there is no distinction between high-calorie and low-calorie gas networks. That said, some German liquidity is generated by trade between the two markets.

This arbitrage opportunity will be lost following the merger. And the German market will retain much of its complexity post-merger, even as NCG-Gaspool trading dries up.

The new market will still have separate high and low-calorie networks, with market participants able to trade both and have them converted. And all 11 of Germany’s balancing zones will be kept following the merger, at least initially.

The long-term future of the separate gas quality networks and balancing zones remains an open question, adding another layer of uncertainty to an already complex transition.

One concrete challenge that the new market will face is a sharp reduction in physical firm entry capacity, caused by potential bottlenecks within the country’s networks.

Germany’s operators and regulator have cobbled together a multifaceted approach to guarantee the same amount of entry capacity post-merger, without having to invest in new infrastructure.

But the regime — composed of a capacity overbooking and buy-back system, as well as additional market-based measures — is new and complex. It remains to be seen how these measures will hold up.

These challenges may make it extremely difficult for the newly consolidated German market to supplant the TTF as Europe’s benchmark.

But the unified German hub will have some advantages over the TTF.

Germany consumes more gas than any other European country, far surpassing the region’s second-largest consumer, the UK, and with more than double Dutch demand. 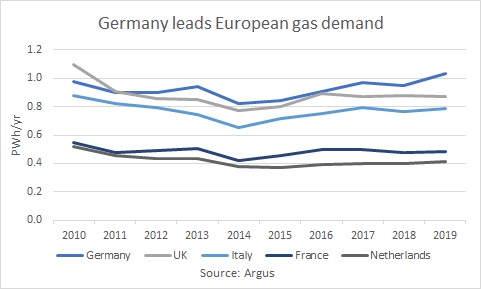 In addition, while Germany remains a degree of separation removed from global LNG markets, new terminals are under consideration in three locations — Wilhelmshaven, Brunsbuttel and Stade — which are all planned for completion in 2023-24.

The completion of these facilities would link Germany directly to global gas markets.

The country is also home to the region’s largest aggregate storage capacity — and fourth-largest in the world behind the US, Russia and Ukraine. This storage space is provided by several operators, most of which auction and sell capacity on the open market, allowing firms plenty of opportunity to trade summer-winter spreads.

The German markets have already found use as satellite hubs for much less-liquid central and eastern European markets, from the Czech Republic to Ukraine.

NCG and Gaspool are already liquid enough at the front of the curve for some firms to index their supply and storage contracts in central and eastern Europe. A unified German hub could provide these developing markets with a more relevant and proximate benchmark than the TTF.

The German market integration follows close on the heels of another merger — France’s Peg Nord and TRS markets combined to form the Peg from 1 November 2018.

French liquidity has subsequently climbed, although it has still lagged behind NCG and Gaspool, let alone the TTF. The merger has also attracted new market players and resulted in tighter bid-offer spreads. 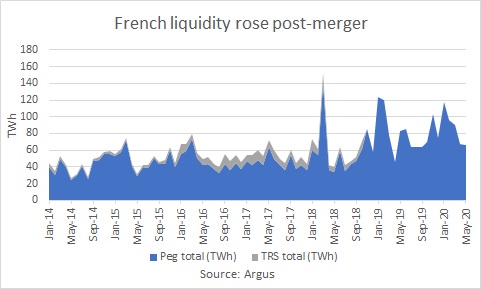 But liquidity at the TRS had been a fraction of that at Peg Nord, providing few opportunities to trade the basis market between them. In contrast, liquidity at NCG and Gaspool is relatively even, allowing for much more trade between the two German hubs. 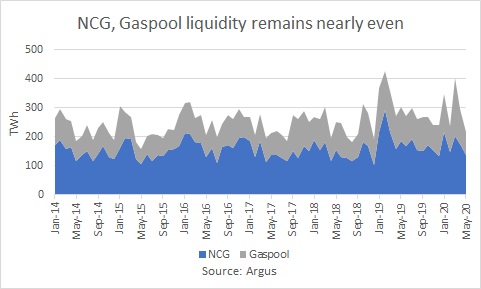 The development of liquidity at Europe’s newest trading hub is still an open question, especially in the long term. A number of obstacles could block its trajectory, and displacing the TTF is likely to remain an uphill challenge.

Argus has launched new assessments in advance of Germany’s merger to give market participants maximum transparency about forward prices, an independent reference, and the tools to plan ahead.

The new Argus Germany VTP assessments are for monthly and quarterly contracts delivered from 1 October 2021 and beyond. As the merger date draws nearer, Argus will introduce forward months, balance-of-month, day-ahead and weekend assessments.

Learn more about the prices

Major oil companies are grappling with two huge problems – how to navigate their way through the demand and revenue slump triggered by the Covid-19 lockdown, and how to reposition their businesses for the longer term as the world moves towards a lower carbon future.