Over the past few months, the discount of the sour grade Mars has narrowed considerably against sweet grade LLS.

In this episode of The Crude Report, a podcast series on global crude oil markets, we discuss how this came to be: a combination of a ripple effect of the Opec+ production cut and dampening light, sweet crude market dynamics. Alex Endress, an Argus reporter, discusses the details.

Jessica: Hello, and welcome to Argus' The Crude Report, a podcast series on global crude oil markets. My name is Jessica Tran, and I am your host for today's episode.

Over the past few months, the price spread between sour and sweet crude oil in the US state of Louisiana has considerably narrowed. This is thanks to a number of things, but mostly because medium sour crude has become a little harder to come by on international markets. In comparing Louisiana's main sour grade called Mars and sweet grade called Louisiana Light Sweet or LLS, the discount averaged $0.53/bl in the August trade month that ended on Friday, which is the second tightest average this August launched volume-weighted average assessments in the early 2000s, with the tightest being in the July trade month at $0.31/bl. 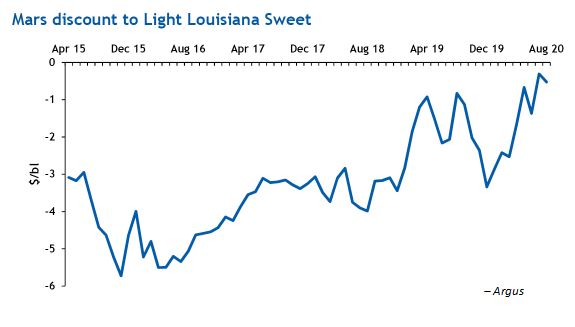 To discuss the market dynamics behind this, I'm joined by Argus reporter, Alex Andres. Alex, it seems like one of the side effects of the Opec+ production cut agreements is that medium sour grades like Arab Medium have become less available. Why is that, and who's looking to buy it?

Alex: Sure. So, you know, if we look at one indicator of, you know, what's going on here, Saudi Aramco actually increased its official formula price to the Asia-Pacific for the third month in a row, and so for Saudi Aramco's sour crude, that means that its Arab Medium cargoes were priced at roughly $1.25/bl premium to the average of Oman and Dubai benchmarks or about $1.00/bl higher than its price relative to those benchmarks for July. And so, when comparing it to comparable sour grades at one point this month, the delivered value of Arab Medium in China was roughly $1.30/bl higher than the landed cost of Louisiana's Mars loading in August. So, even though Asia-Pacific refiners traditionally rely on Mideast Gulf supplies, they've also found an alternative that could be cheaper in Mars.

Jessica: So, Mars may be cheaper than Arab Medium, but has more demand for it also caused an increase in the price of Mars in absolute terms?

Alex: Yeah. So, if we look at some of the prices and what we've seen at the US Gulf coast right now, you did mention the spreads between Mars and LLS, so the second tightest Mars discount to LLS during the prompt August trade month that ended on Friday, and before that, it was at the narrowest discount in July. And, you know, we've also seen this sort of relationship with other grades and other prices. So, actually, if you compare Mars to WTI Houston, it averaged an $0.08 premium over the August trade month, and it hasn't been at a premium...and it hasn't averaged out at a premium over the trade month in about a year. And another thing that we could look at, you know, we know that Argus just launched this new Argus AGS Marker which is Midland-sourced crude at the Gulf coast, and it's a good opportunity to compare it actually to the Argus Sour Crude Index, which, you know, is accounted for by Mars, Poseidon, Southern Green Canyon, so medium sour grades actually ended the trade month with ASCI, or the Argus Sour Crude Index, at a $0.99 average premium over the Argus AGS Marker. So, yeah, those are some indicators to look at.

Jessica: Okay. So, shifting our gears a little bit to actual volumes, how much of Mars has actually been exported?

Alex: If we look in May, it was, you know, more than 375,000 b/d compared to 275,000 b/d in the prior month. And when comparing with other crudes being exported out of the US, the Mars share jumped from 9pc to 13pc, and it's not all going to China. India has also turned to US sours with the largest state-controlled refiner IOC earlier this month issuing a tender seeking September and October deliveries of grades like Mars, Poseidon, and Thunder Horse.

Jessica: Okay. So, going back to the narrowing price gap between Louisiana sour and sweet crude oil, the story also isn't just about the sour crude market dynamics. Aren't there also a lot of domestic factors on the light sweet crude oil side?

Alex: Absolutely. You know, we have been talking about the international factors working on Mars, but light sweets have actually been pressured lately at the Gulf coast, yeah, and part of that is because of the high stocks that we've had, that we've seen. So, the build that we've seen in light sweet stocks began after US crude prices fell to record lows, and that includes the negative settlement on April 20th, which did result in a deep contango, so companies sought crude storage to help alleviate the glut and to allow for sales in forward months at higher prices. You know, the US Gulf coast crude stocks reached a record high of about 309mn bl and the week ended July 3rd, so that's roughly a 5mn bl weekly build that we saw there from that data from the US Energy Information Administration or the EIA. And since the week ended May 15th, the EIA weekly data reports indicated ensuing record Gulf coast tallies, which actually did help push total commercial US crude stocks to record tallies during that same time period. Sometimes we do get a draw, but over the time period, we have seen in different weeks sort of successive record highs. And that's even happened at times when the Cushing, Oklahoma hub storage figures have been down, and they're definitely down from what we've seen in early May. And you mentioned the SPR, so the Strategic Petroleum Reserve supplies have also been a factor, but rather than staying in storage for a long time, these SPR supplies could be available as soon as August or September since much of the recent build has been a result of moving privately-owned crude for short-term storage through a US Energy Department auction. And so, we did see that crude stocks in the US SPR were at about 656mn bl in the week ended July 17. So, that's roughly steady from the prior week but up by about 21.1mn bl from the first count of the year. So, SPR stocks are not included in the overall EIA commercial crude inventory figures, but as we said, they could be available as early as August or September because of this privately-owned storage.

Jessica: Yeah. There’s a lot of factors going into play. So, I know you watch these markets all day, every day – any venture on what to expect in the near future?

Alex: Yeah. I think there are several factors, again, at play here. And I think just from looking at some of the recent events, I mean, one thing that's definitely been discussed is the Dakota Access Pipeline, which was ordered to be shut on July 6, although there's been a stay has been issued, so they're still kind of working some things out there and it's obviously kind of going back and forth. But when we heard that news, we did see a bit of a slight pop in the light sweet prices and the spread widened a bit, but I think that since we did discuss these stocks and the storage figures of the Gulf coast, we're really going to have to see a meaningful draw in those stocks before...I think that this spread of the Gulf coast begins to widen back out because, with light sweet grades at this narrow premium to the sour grades, I think you've got to have less availability. We have to see kind of demand really start to eat into the storage numbers. And another thing that I guess we'd look at is, of course, Opec action and whether strategies sort of change in the next coming months, which could be related to Covid-19 and how the numbers there develop. I think part of it is, you know, if we get a vaccine, maybe we start to see economies open back up and that could feed some of the demand that has, I guess, compressed all of these crude prices over the past few months. And then, of course, the upcoming election could maybe have an effect, but those are just a few of the factors that we might

Jessica: Yes, you have a lot to watch in the next couple of months. Thank you for taking the time to join us today, Alex.

Alex: Absolutely. Thanks for having me.

Jessica: To check these markets, including price movements, market commentary, and analysis on a daily basis, subscribe to Argus Americas Crude. You can find more information on this service at argusmedia.com. Thanks for tuning in, and we look forward to you joining us on the next episode of The Crude Report.

The global oil market is looking toward China for tangible signs of a worldwide revival. Still the world’s largest oil demand center, China is seeing a healthy return of crude demand, particularly in Shandong, their main import hub.