Welcome back to our monthly blog where we cover it all: The US Crude Export Chronicles by Argus Associate Editor Amanda Hilow (@HilowMidpoint) and Senior Reporter Eunice Bridges (@eunicebridges12). Come back every month for Argus’ take on US crude exports and how they are faring as some markets start to recover from the Covid-19 shock.

Key players in the US oil market and abroad are shifting away from traditional benchmark pricing after April’s historic plunge below zero, signaling a need to move from landlocked Cushing values toward a representative WTI price at the US Gulf coast.

Argus responded to the appeal for an alternative index with the launch of the AGS Marker in late June to capture the daily outright value of Midland-quality crude across seven terminals at the US Gulf coast.

The new index is the first of its kind, capturing both waterborne and pipeline WTI transactions at Magellan’s east Houston terminal, Echo, Speed and Genoa junctions, the Enterprise Hydrocarbon Terminal (EHT) on the Houston Ship Channel, Seabrook and Texas City. (See our white paper for an in-depth analysis of the AGS Marker’s unique fundamentals.)

Liquidity reported into the AGS Marker surpassed 475,000 b/d in the assessment’s inaugural trade month, which ended just last week, on the support of bellwether crude WTI at Houston, Texas. That already represents more than 95pc of the total August trade month volume reported in the Argus Sour Crude Index (ASCI), which has been in place since 2006 as the staple benchmark for sour grades trading at the US Gulf coast.

AGS volume is poised to grow exponentially when US light sweet waterborne trade activity picks up pace with the global recovery from the early stages of the Covid-19 pandemic. The index’s shortlist of locations is planned for near-term expansion to include other terminals outside of the Houston area.

In the pipeline: DAPL drama

The Bakken shale could be facing a crisis of takeaway capacity, which is not good news for US exports.

A US district court on 6 July ordered Energy Transfer to shut the 570,000 b/d Dakota Access pipeline (DAPL) and drain oil from the line within 30 days, as a result of a long-standing legal battle over its environmental permitting. DAPL is the largest takeaway pipeline out of the Bakken and connects to another Energy Transfer pipeline to the US Gulf coast.

The company has appealed the shut down to a higher court and asked for a stay while the court reviews the case. A decision is pending – and Bakken producers are on pins and needles waiting for word. In the event of a shut down, Energy Transfer says it would take about three months to empty the line, a far cry from the 30 days prescribed by the district court.

On top of the DAPL woes, another Bakken pipeline is at risk of a shut down. The US Bureau of Indian Affairs issued an order to shut Marathon's High Plains crude pipeline system in North Dakota and Montana, saying that the company is trespassing on Native American land. The 700-mile system includes gathering and transportation lines. Marathon is planning to appeal.

Not all US infrastructure news this month was about shut downs. Buckeye’s South Texas Gateway terminal in Corpus Christi, Texas, started export service loading an Aframax vessel for the first time. Marine operations are expected to ramp up through the end of this year in line with additional phases of construction. The terminal will eventually have 800,000 b/d of throughput capacity.

We knew US exports to China would be strong in May – but the record high volume above 1.2mn b/d was a surprise. In fact, China surpassed Canada as the number one destination for US crude loaded in May, according to the latest monthly trade data from the US Census.

Despite the record high flows to China, overall US crude exports fell below 3mn b/d in May, the third straight month of declines reflecting the global demand impact of Covid-19. 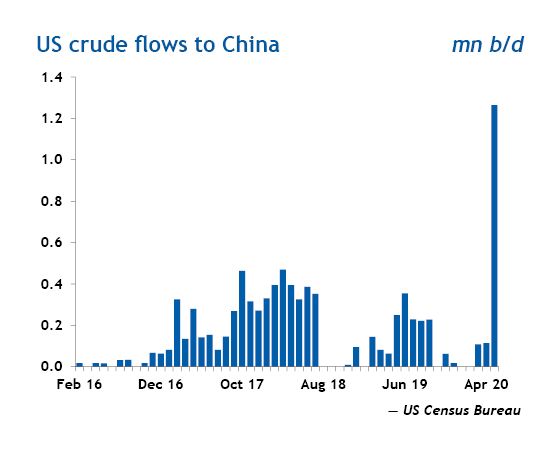 Flows to China are anticipated to fall by at least half come June and July data, while another 21mn bl — or more than 675,000 b/d — has already been placed on subjects to load in August. But the future of those shipments is unclear as diplomatic relations between the two countries begin to deteriorate once again.

The uneasy truce in US-China relations, following the signing of an interim trade agreement in January, did not last as President Donald Trump's administration adopted a narrative of blaming Beijing for the spread of Covid-19. The US this month ordered the closure of the Chinese consulate in Houston, which was swiftly matched with a retaliatory closure of the US consulate in Chengdu.

We will be following the latest developments and whether they significantly impact trade patterns, including a possible second wave this year of floating storage for US crude.

Argus and our friends at Vortexa will co-host a webinar with BP at the end of the month about predictive analytics. We hope to see you again for next month’s analysis on US crude export flows and dynamics.

The waters are still pretty rough, but we wish you smooth sailing.

Tune into our latest fertilizer podcast, focusing on the dependency and interconnectivity of the energy and agricultural industries in the US through a shared denominator - corn.

Brazilian exports of poultry and pork meat should increase in 2020 against last year, but the pressure exerted by the pandemic in the international trade of these products will have a significant impact on shipments.