Global base oil prices have risen in recent weeks in response to tighter supply and firmer demand. The trend has supported steadier or higher values relative to crude and diesel prices. 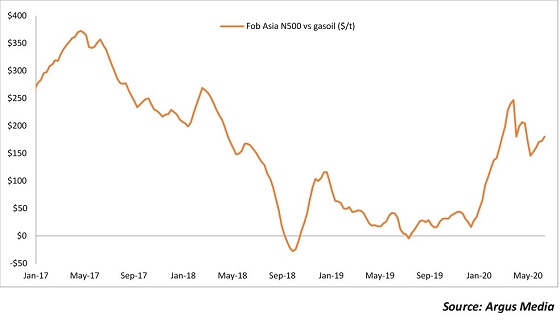 Rising prices of heavy-grade Group I and Group II have led the recovery in Asia-Pacific. A sustained recovery in Chinese lube demand has extended into the third quarter of the year. Its structural shortfall of heavy grades has supported ongoing demand for imports from South Korea especially. Base oil exports from the northeast Asian country to China rose in May to their highest level in more than three years.

South Korea’s base oil exports to China rebound in 2Q 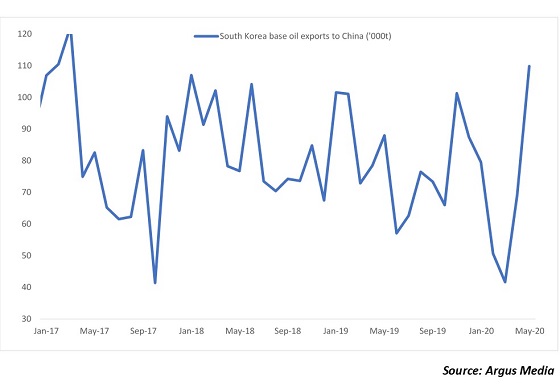 Rising prices of Asia-Pacific Group II N500 have yet to trigger a slowdown in Chinese demand. Some distributors in that market have held off passing on the higher import costs, or at worst reversed recent discounts. The move reflects the unusually wide arbitrage for heavy-grade imports. The discount of fob Asia Group II N500 to China’s domestic prices has narrowed by more than $220/t since May to little more than $100/t. But the typical discount was less than $80/t in 2018-2019. 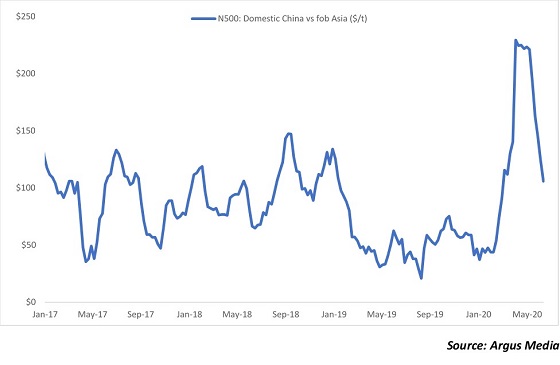 While Asia-Pacific demand has risen, supply has continued to tighten. Producers throughout the region cut output levels because of refinery run cuts or extended shutdowns. Producers cut run rates despite firmer base oil margins. The trend partly reflected the impact of unusually weak diesel and gasoline premiums to crude values.

Thailand’s base oils run rates fall in May 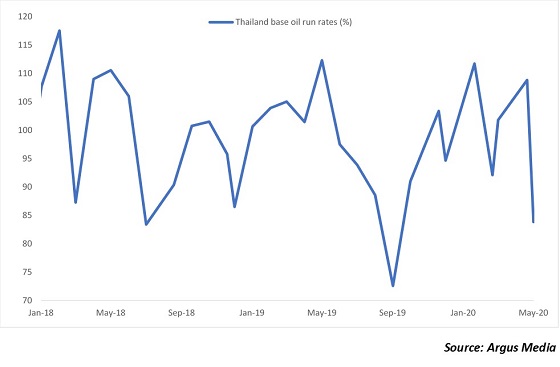 Weak fuel margins have similarly curbed European base oil producers’ flexibility to raise output in response to firmer demand and tighter supply. A slump in domestic Europe Group I base oil values relative to diesel and vacuum gasoil values have added to a reluctance to increase run rates. 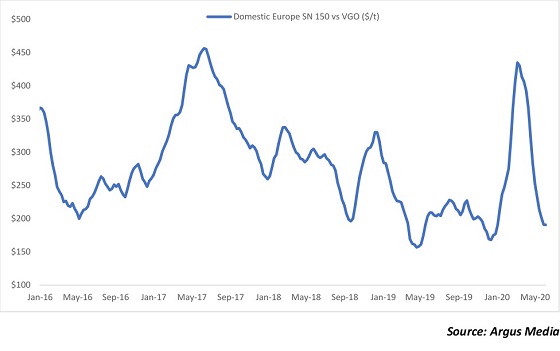 But there are a growing number of signs of a price response to the tighter regional supply. A large supply surplus in April and May prompted refiners to cut their export prices to clear the overhang through overseas markets. European export prices slumped relative to Europe domestic prices in May to their weakest level in more than a decade. That trend began to reverse from the second half of May. By early July, export prices had returned to more typical discounts to domestic prices. 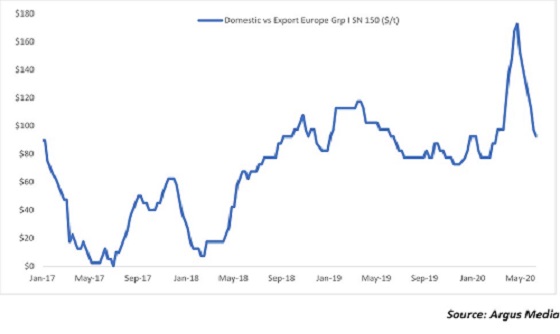 European export Group I prices have risen faster than prices in the fob Baltic market. The narrow gap between Europe and Baltic prices in the second quarter had eroded the competitiveness of exports from the Baltic market. That trend is reversing and making Baltic supplies more attractive. The premium of Europe export prices to Baltic prices rose in early July to its widest since March. 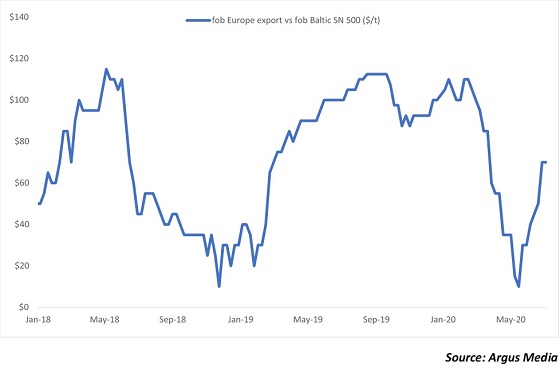 Baltic base oil supplies’ lack of competitiveness relative to European supplies in the second quarter triggered a slump in base oil shipments from Baltic ports. Base oil cargo loadings of less than 70,000t from Baltic ports during the second quarter were the lowest quarterly volume since 2016. The trend added to Europe’s tighter supply at the start of the third quarter. 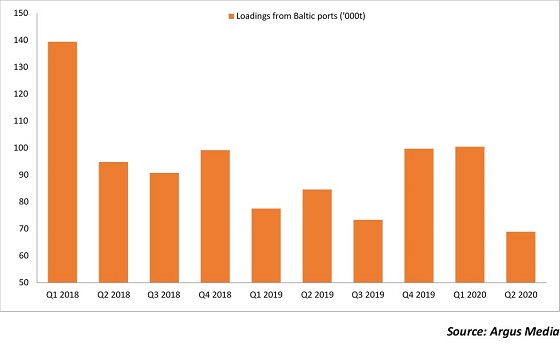 Tighter European and Baltic supply and rising Europe export prices have started to provide upward support for domestic Group I prices. Their steep discount to Group II and Group III prices provided further support. The smaller fall in prices for the premium-grade supplies in the second quarter left their premium to diesel close to their firmest levels in the last three years. 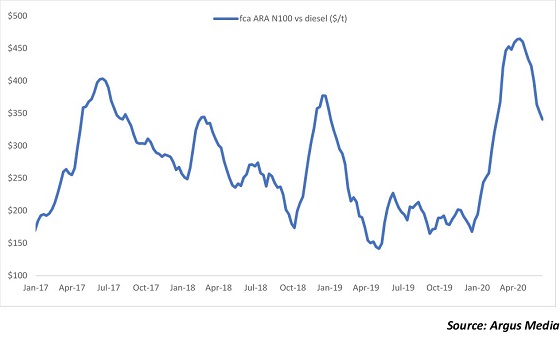 Part of the price support for European Group III base oils reflected their tighter availability. Supply tightened following a drop in imports from South Korea, UAE and Russia during the second quarter. There were no South Korean base oil exports to the Netherlands/Belgium in May for the first time since 2009.

South Korea’s May exports to the Netherlands/Belgium pause 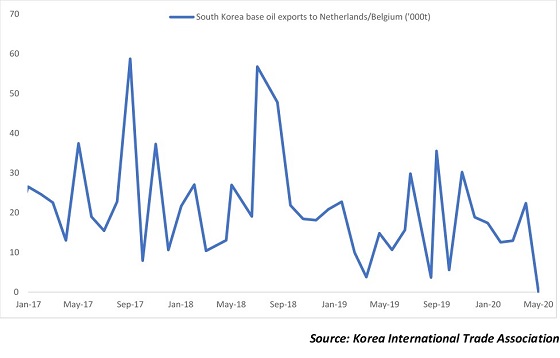 A similar drop in Group III imports into the US in the second quarter supported firmer premium-grade prices in that market relative to Group II prices diesel values.

US imports of premium grades fall in April 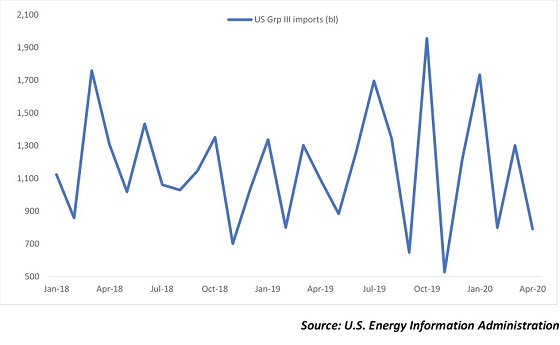 But the US’ total Group III base oil imports in the first four months of this year were still higher than year-earlier levels. Demand for these premium grades has also recovered in recent weeks more slowly than Group II base oils. The premium of Group III prices over Group II had surged in April and May to its highest level since mid-2017. It has started to narrow, reflecting the weaker recovery of Group III base oils. 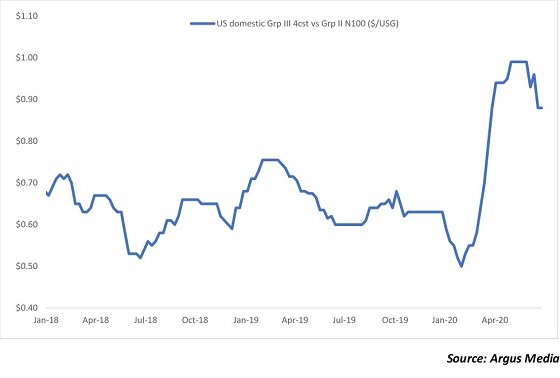 US Group II values have steadied relative to diesel after falling sharply in the two months to the end of May. The steadier values followed the export of an unusually large volume of surplus supplies in June to markets like Africa, Mideast Gulf and India.

US producers raised their posted prices in the second half of June in response to rising feedstock costs, tighter spot availability and firmer demand. But base oil values have remained weak relative to diesel even after the removal of those surplus supplies and the rise in outright spot prices. 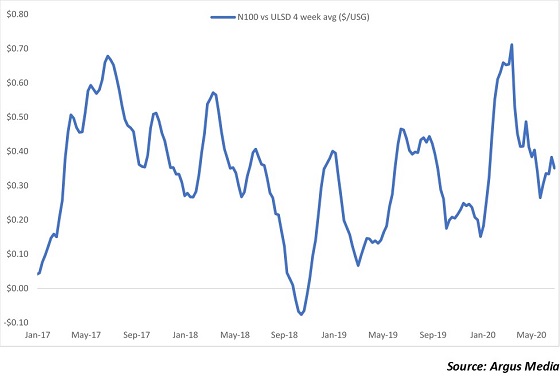 Global net nameplate production capacity in June declined from May. Net production in July is set to trend higher from June to its third-highest level this year. But it remains lower than at the end of last year because of widespread run cuts and maintenance.

Firm nameplate production in June coincided with a recovery in lubricant demand and market activity as lockdown restrictions eased. The trend also coincided with weak base oil margins relative to crude and gasoil values, as well as weak gasoil values relative to crude. July’s supply availability is set to increase marginally, even as new premium-grade production capacity in China increases output. A stronger rise in supply is capped by widespread run cuts and maintenance.

Europe net nameplate production capacity in July is expected to increase by about 3pc from levels in June. The rise in production reflects mainly a recovery in Group I and Group III production as lockdown restrictions ease.

US net nameplate production in July is projected to increase marginally. Supply availability is set to be at its second-highest this year. But it is expected to remain lower than average production levels in the fourth quarter of 2019. 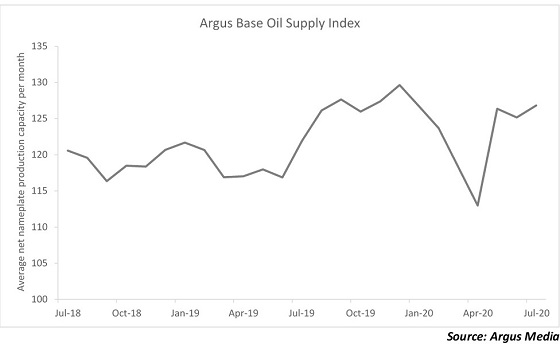 Squeezed margins, changing arbitrage spreads and firmer export prices reflect expectations that base oil prices and demand have bottomed out.

Plant maintenance, run cuts and arbitrage exports have helped base oil producers to balance out the drop in demand over the last two months. But weakening margins reflect the still-muted strength of the recovery in demand and the market’s structural oversupply.