The courts ruled in Vale’s favour and set an 18 June hearing after labour officials contested the decision.

Brazilian mining firm Vale can hardly afford disruption. It has struggled to recover from a January 2019 dam accident and wet weather that cut its production by a fifth to 302mn t in 2019. Now the rapid spread of virus could bring lockdowns and more disruptions. Vale was forced to halt its Malaysia iron ore blending terminal for nearly two months during the country’s lockdown. 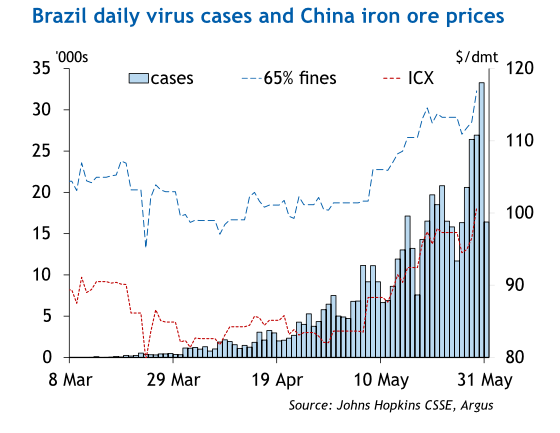 Cases near Vale operations risk more lost tonnes and delays to mine restarts. Vale still requires permits to restart 6mn t/yr at Brucutu and 5mn-6mn t/yr at Fábrica, Timbopeba and Vargem Grande operations for its 2020 guidance. It expects to finish a slurry pipeline at Timbopeba and a single-step dam at Vargem Grande by the end of the year, and is reinforcing dams at Brucutu and Fábrica.

Itabira at 36mn t was 12pc of Vale's total output in 2019. The guidance did not foresee large-scale shutdowns of operating mines, and neither did many Chinese market participants. "If the operations stopped in this area, iron ore prices might jump to $150/dmt in the coming months. Itabira is a key producing area for Vale. The impact to the whole iron ore supply chain would be enormous," a Beijing-based iron ore market participant said.

Steel production cuts are cushioning lost supply. Ex-China global steel output fell by 28pc in April from a year earlier. Qatar, among the sharpest declines, saw output down by 74pc, India down by 65pc, the US down by 32pc, and the EU, CIS and Japan all down by 23pc. This was as China's largest steelmakers raise output to near record levels.

Steel production cuts in Europe, South Korea and Japan could divert 4mn-5mn t/month of iron ore to China. The EU would account for 500,000-600,000 t/month of high-grade Atlantic pellet to China after it shed about a fifth of its 87mn t/yr hot metal production. That would free up 15mn t of iron ore for China this quarter.

The ICX index last year surged by 74pc to exceed $125/dmt cfr Qingdao in July after seaborne markets lost more than 100mn t/yr of supply from Brazil and Australia.

Chinese port inventories slipped to a new three-year low last week of 108mn t, down by 13.6pc this year, as a second year of supply disruption hits.

A cyclone in February in Western Australia closed all iron ore ports in the Pilbara region, reducing February shipments to an 11-month low. 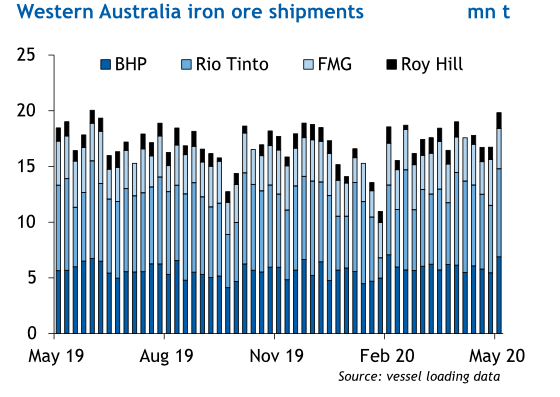 Australia's iron ore shipments have rebounded. Shipments from its four largest mining firms in the week to 23 May rose to the highest level since the end of June 2019.

A potential risk to Australian supply is the decline in Australia-China relations after Canberra supported an independent inquiry into the Covid-19 outbreak. Beijing has taken action against Australian barley, beef and wine and has its sights on Australian thermal and coking coal.

But China's dependency on Australia should insulate iron ore from the dispute, especially as Covid-19 risks mount for Brazil. China acknowledged as much last month when it streamlined inspections to speed through mainstream iron ore cargoes. China knows it has no room to manoeuvre.

A perfect storm for GCC steelmakers