Global seaborne coal exports fell by around 7pc, or 30.5mn t, in the first five months of the year, with Indonesia accounting for more than a third of the supply reduction.

Global exports totalled 389mn t in January-May, according to customs and shipping data and Argus' estimates. This is 7pc less than last year but flat on 2018. All seven major seaborne coal exporters recorded a year-on-year fall in exports, but Australian supply held up better than other origins, boosted by strong Chinese buying. 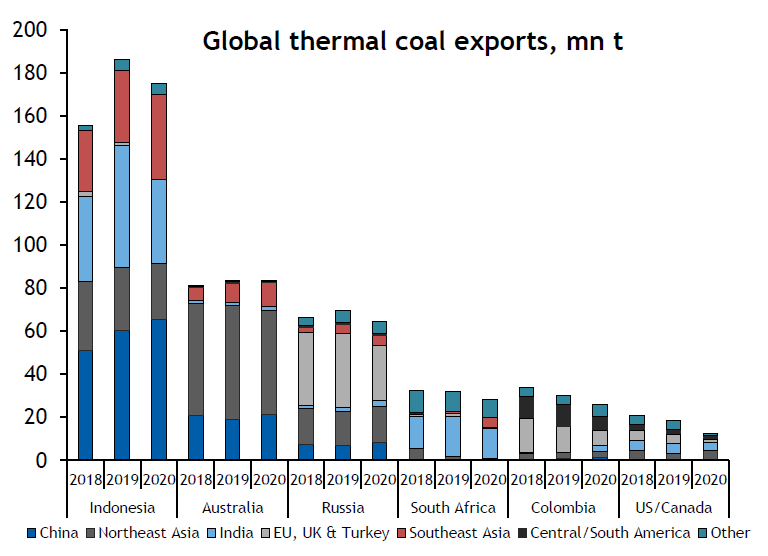 Southeast Asia, particularly Vietnam, was the main source of flexible demand in the global market in the first half of the year. Southeast Asian imports jumped by 19.8pc to 62.2mn t, with Vietnamese inflows surging by 7.8mn t to 24.9mn t in January-May.

Shipments to China from the seven biggest exporting nations also grew in aggregate by around 13.8pc to 87.9mn t, but trade flows may drop off in the coming months if the government enforces import quotas as part of efforts to bolster China's domestic coal sector.

Indian demand was the worst hit by measures to contain Covid-19.

Indian imports crashed by 19.3mn t to 65.3mn t and an immediate recovery in buying seems unlikely given high stocks, a potential slowdown during the Monsoon season and government efforts to prioritise domestic coal usage.

The drop off in industrial activity in India affected South African suppliers, who looked to diversify into other markets. South African exports fell by 12pc on the year to 28.3mn t in January-May, but flows to southeast Asia have grown during the lull in Indian demand. 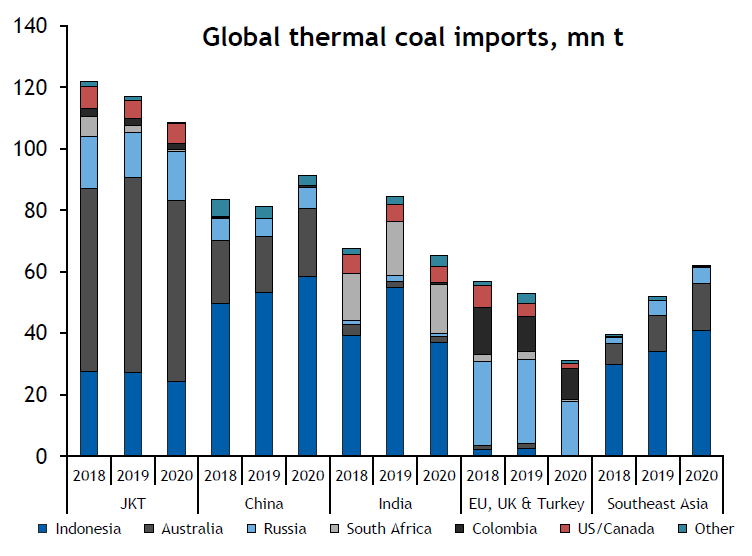 Colombian exports recorded a similar reduction, decreasing by 13.2pc to 26.1mn t. But with some domestic production still curtailed and European coal demand in structural decline, Colombian supply may be worse hit in the second half of the year.

US and Canadian exports fell by a third to 12.4mn t, as soft European demand and weaker global prices over the past 18 months continue to shut volumes out of the seaborne market.

EU and UK imports fell to just 18.6mn t in January-May, from 41.6mn t a year earlier. Covid-19 exacerbated the trend in declining coal usage in Europe, but imports were already falling precipitously because of stiff competition from gas.

But Turkey has been a bright spot in coal demand this year, with imports rising by 10.2pc to 12.5mn t in January-May. The market is likely to be strongly contested by Colombian and Russian suppliers in 2020.

Aggregate exports from Russia were hit by weak demand in the Atlantic, but some of the decline was offset by stronger sales to northeast Asia, China and southeast Asia. Russian exports in January-May slipped by 7.6pc on the year to 64.4mn t.