US crude exports to China are rebounding after starting off the year at a glaring zero, but will the upswing continue?

Welcome to our monthly blog: The US Crude Export Chronicles by Argus senior reporters Amanda Hilow (@HilowMidpoint) and Eunice Bridges (@eunicebridges12). Come back every month for Argus’ take on US crude exports and how they are faring as markets start to recover from the Covid-19 shock.

US crude exports to China appear to be on the upswing despite the ebbs and flows of the trade war between the two countries.

China imported 114,000 b/d of US crude in April, in the latest US monthly trade data. That is up from 108,000 b/d in March, and none in January and February. Exports to China were expected to start ramping up at the start of this year after Beijing and Washington signed an interim trade deal that included commitments to purchase US energy products. But the timeline was upended by the Covid-19 outbreak.

More recently, US President Donald Trump said that the interim deal remains intact, disavowing comments from his trade adviser Peter Navarro. China's imports of oil and LNG so far this year have been below amounts targeted in the deal, but US officials suggest that China will step up purchases later this year.

Argus has already caught wind of at least 14.48mn bl, or more than 465,000 b/d, of crude that departed the US Gulf coast in May, with various destinations in China signaled as end points. And another 465,000 b/d has already loaded or been scheduled for June on the same route. 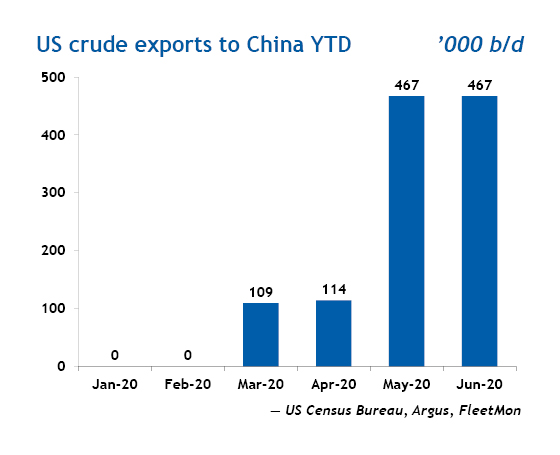 Magellan Midstream will start service in September on a new dock that can load Suezmax vessels at its Seabrook terminal in Texas. Magellan and its joint venture partner LBC Tank Terminals are also adding 750,000 bl of storage at the facility, which should be in service in early 2021.

Magellan's exports of crude have already increased in the second quarter compared with the first and should continue at a steady rate "in the foreseeable future,” chief executive Michael Mears said at an industry conference.

Another major player in oil exports, Enterprise, said its exports of NGLs, refined products and crude have been steady in recent months despite the pandemic. Enterprise earlier this year added 1mn bl of storage at its massive terminal on the Houston Ship Channel and is also building an eighth dock at the terminal which will be able to load crude in the fourth quarter.

In the Caribbean, Limetree Bay has commissioned its offshore port in the US Virgin Islands capable of loading and unloading very large crude carriers (VLCCs). Limetree safely loaded "several million barrels" of crude in May to VLCCs.

The highly anticipated April trade data was noteworthy in its lack of drama. US crude exports fell by 13pc on the month, but remained above 3mn b/d, showing resilience in the face of market chaos.

If you recall, crude prices crashed below zero in April amid a market panic over rapidly filling storage and a global collapse in demand. Still, US crude exports averaged 3.08mn b/d, about 200,000 b/d above year earlier levels. The top destinations for US crude in April were Canada, the Netherlands and Taiwan.

We’ll likely see exports shift to more of a sour slate in July, as European refiners seek to diversify away from Russian Urals and Asia-Pacific buyers seek more economic alternatives to Mideast Gulf grades like Arab Medium. US medium sour Mars was last heard around parity to West Texas Intermediate (WTI) on a delivered-Asia basis, and was offered last week $1.45/bl higher than light sweet Bakken for September delivery to China.

Light sweet flows to eastern and central Europe may also rise as competing crude and condensate production in Russia’s Arctic region wanes to two-year lows. An Aframax is expected to land in Omisalj, Croatia, next month for the first time in more than a year, marking the fifth-ever US crude export to that country.

And a new player in town, Polish Unimot’s subsidiary 3 Seas Energy, is opening up offices in Oklahoma with the aim to blend specialty US crude cocktails for Belarus and nearby countries that are moving away from Russian supply after an ugly price dispute with Moscow in the first quarter of 2020.

We hope to see you again for next month’s analysis on US crude export flows and dynamics. The waters are still rough, but we wish you smooth sailing.

The US Crude Export Chronicles: May 2020

The US Crude Export Chronicles: April 2020

Oil-producing countries have agreed to cut production, but a cry of “too little, too late” is still echoing across global markets.

The US Crude Export Chronicles: March 2020

The future of US crude exports is at risk as the coronavirus pandemic caps oil demand globally, while prices collapse amid the looming flood of Opec+ crude supplies in April.