Low feedstock costs have incentivised producers in Asia-Pacific to maximise polymers production despite weaker demand in this year’s second quarter. Heavy plant maintenance and a demand recovery in China have allowed producers in other regions to balance the demand drop by increasing exports to China.

Plant downtime and delays to the start-up of new facilities resulted in a period of supply shortage and boosted polymers prices near the end of the second quarter. But weak polymers demand in key sectors such as automotive and household and the start-up of new capacity in the imminent future pose worries about oversupply in the second half of 2020.

Southeast Asian polymers prices dipped in mid-March when Covid-19 lockdowns hit supply chains, conversion operations and demand for plastic goods. But the massive plunge in global oil and feedstock costs and increased export arbitrage opportunities to China have incentivised southeast Asian producers to operate polymers plants close to their rated capacities from March-June. A collapse in naphtha demand from the gasoline sector in northwest Europe has resulted in increased exports to Asia-Pacific, especially when Europe-Asia naphtha price spreads began to widen in mid-March. Asia-Pacific naphtha prices fell to a historic low of $165.75/t cfr Japan on 1 April as the supply length grew. 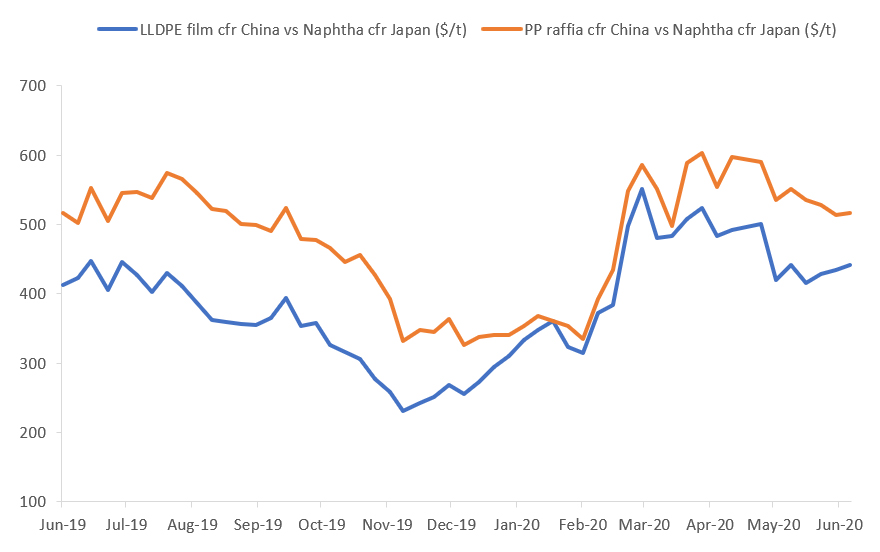 In late March, a rising need for surgical masks globally during the Covid-19 pandemic led to a sudden spike in demand for high-melt-index fiber-grade polypropylene (PP), a raw material for mask production. This encouraged Chinese producers to increase output of fiber-grade PP and shift away from producing PP raffia. By mid-April, about 40pc of PP plants in China were producing the fiber grade compared with 5pc at the end of March. Reduced raffia grade supply caused a sharp rebound in prices in mid-April. Firm downstream PP demand also drove up feedstock propylene and propane prices. China’s total fiber-grade PP operating rates stabilised at 10pc in June, as demand for surgical masks tapered off.

The gradual lifting of Covid-19 restrictions in China since March and heavy maintenance scheduled for the second quarter of 2020 have led to a recovery in polymers demand and strong import interest. The virus hotspot of Wuhan reopened on 8 April, along with the restart of public transport services, following a 76-day lockdown.

Polymers offers to China are typically lower than offers to southeast Asia and India because of higher transaction volumes and lower freight costs. But polymers have been trading higher in China compared with other markets since mid-April because the northeast Asian country has the strongest demand in Asia-Pacific. Firm Chinese demand has provided producers in the US, Middle East, India and southeast Asia with an outlet to clear their surplus volumes, especially when initial phases of Covid-19 lockdowns badly hit domestic and regional demand. 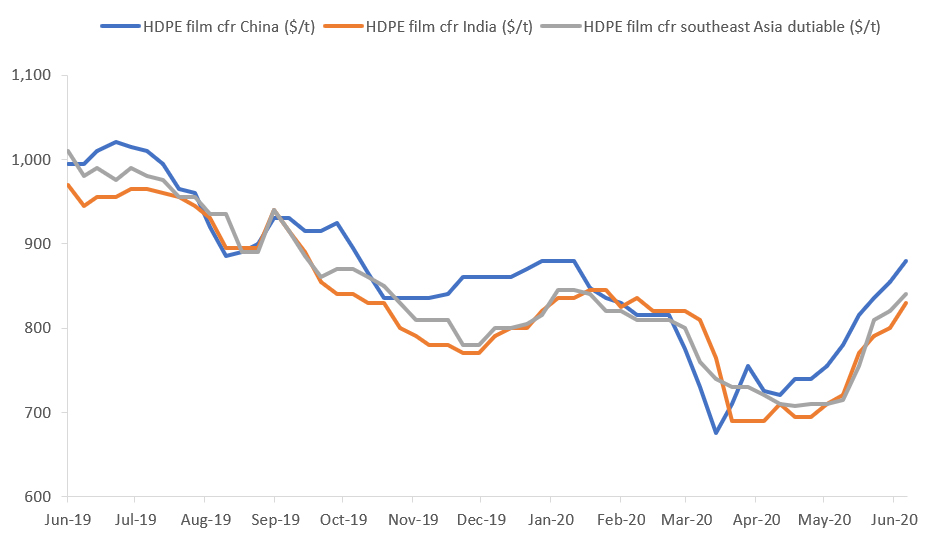 Declines in US polyethylene demand because of Covid-19 lockdowns prompted exports to China in April. This was made possible by exemptions from March on trade war tariffs imposed earlier on US-origin linear low-density polyethylene (LLDPE) and high-density polyethylene (HDPE) by the Chinese government. US-origin LLDPE and HDPE are only subject to 6.5pc import tax following the exemption, regaining their price competitiveness against Middle East-origin supplies. At the same time, US suppliers exported less PE to southeast Asia because of weak demand and lower netbacks. A rapid recovery in US ethylene prices in April also reduced US polyethylene production margins, making China an attractive outlet for exports to maximise profits. 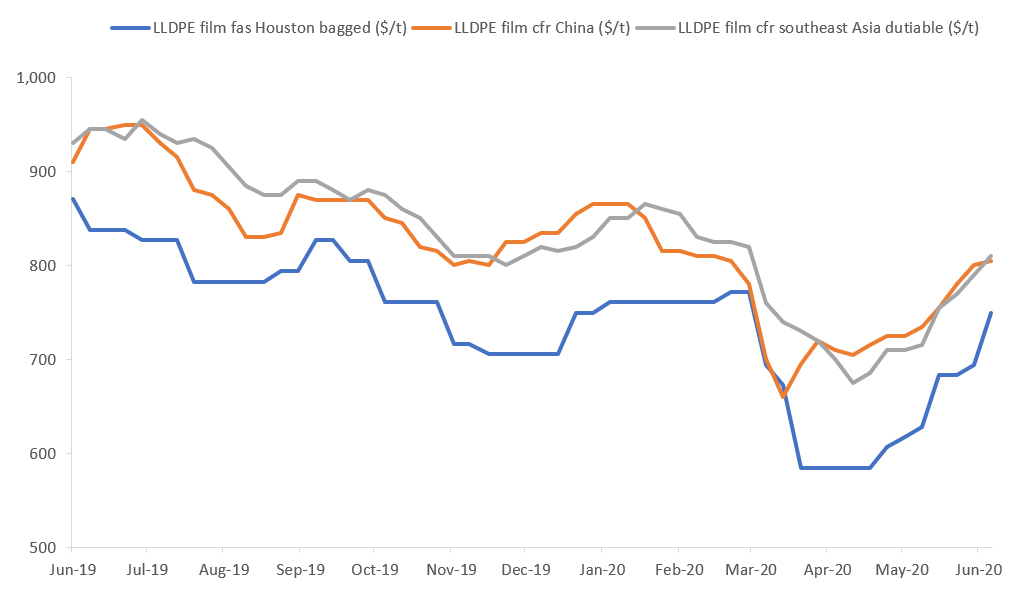 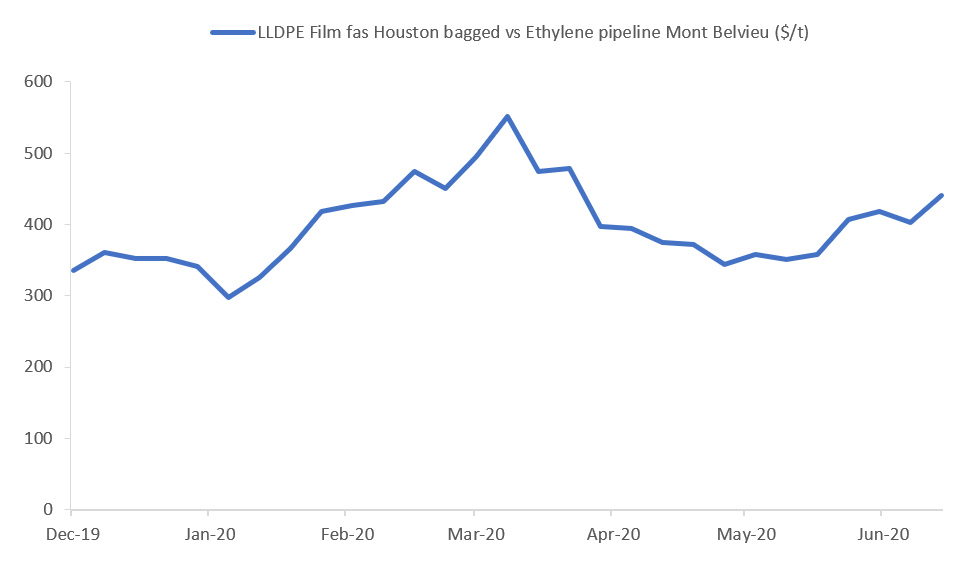 Producers were targeting an increase in polymers prices in late May because of rising feedstock costs and an expected demand recovery in Asia-Pacific. In southeast Asia, spot polyethylene supplies tightened because of downtime at key suppliers’ plants and short maintenance shutdowns. Spot polypropylene offers to southeast Asia were also limited because of firm demand in China.

In India, domestic PE and PP inventories were gradually reduced from early May following relaxations to the country’s Covid-19 lockdown. Output halts in April, cautious production in May and export commitments to China tightened domestic supplies in late May. Local supply remains adequate, but a rapid increase in domestic polymers prices has encouraged traders and converters to consider imports.

The supply shortage came as converters in southeast Asia and India began to replenish inventories following a further easing of Covid-19 restrictions in June and expectations of a price uptrend. As a result, southeast Asian and Indian polymers prices began to soar in June.

Southeast Asia and India catching up with China 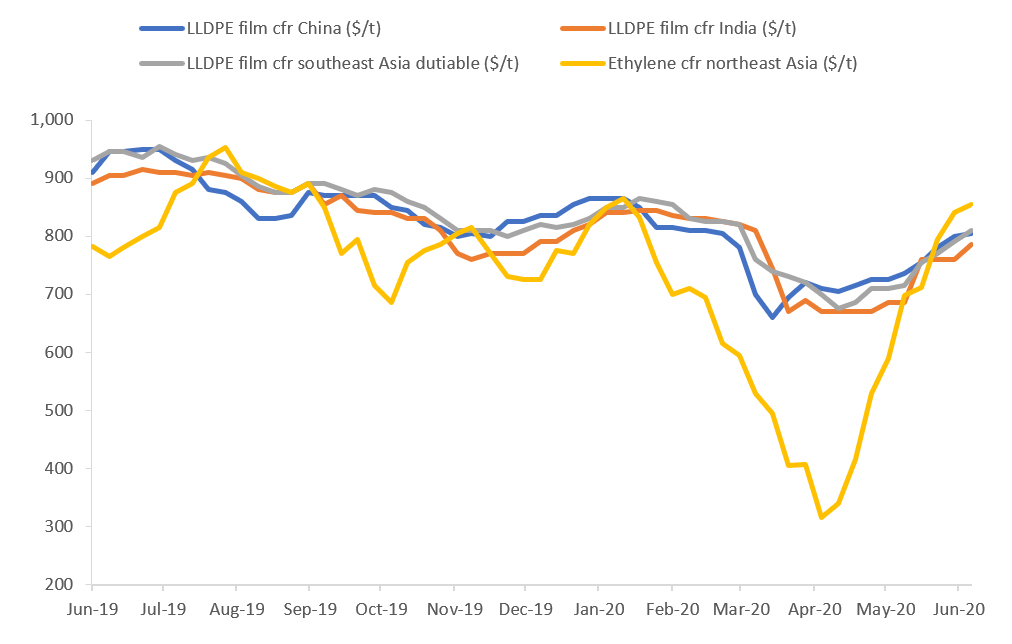 Podcast: The impact of the coronavirus on Middle East supply chains, petrochemical shipping and aviation markets

Sentiment is bearish among Middle East producers as the coronavirus pandemic is impacting the demand in key export markets globally.