Ice Brent crude futures dipped below $30/bl for the first time in more than four years on Monday 16 March and have since fallen below $25/bl to a 17-year low, as the fallout from the coronavirus pandemic continued to depress the oil demand outlook. Oil prices had already taken a battering earlier in the month after Opec and its non-Opec partners failed to agree an extension to production cuts beyond March, with the front-month Ice Brent futures contract now down by half compared with the end of February.

The impact on spot coal prices has been relatively muted by comparison, with Argus' NAR 6,000 kcal/kg cif Amsterdam-Rotterdam-Antwerp (ARA) daily index up compared with the end of February, and the NAR 6,000 kcal/kg fob Newcastle assessment down only slightly.

But a sustained period of low oil prices this summer has the potential to weigh on spot coal prices this winter, particularly in Asia, as it would feed through to long-term oil-linked LNG supply contracts and boost the relative competitiveness of gas against coal.

Most long-term LNG supply contracts in Asia are indexed to oil products, typically using average oil prices across a 3-6 month window preceding delivery, which is evident in the close correlation between the average import costs of countries such as Japan and South Korea and Argus' indicative oil-indexed des Japan LNG contract proxy.

Oil-linked LNG supply has been at a competitive disadvantage to seaborne thermal coal imports for power generation for more than a decade, and the disparity has steadily widened over the past four years amid relative strength in oil prices versus the seaborne coal market. But the gap between the fuels could narrow significantly by the end of this year if the latest drop in oil prices persists this summer and goes unmatched in the coal market.

The implied generation cost for a 55pc-efficient gas-fired power plant in Japan, including environmental fuel tax, could drop to less $37/MWh in the fourth quarter of this year, from around $63/MWh now, based on Argus' forward oil-linked des Japan price indications. The equivalent coal-fired generation costs, based on recent physical forward NAR 6,000 kcal/kg fob Newcastle prices and assuming flat freight rates, would be broadly stable over the period at around $29/MWh. This would cut coal's cost advantage to less than $10/MWh from more than $30/MWh. 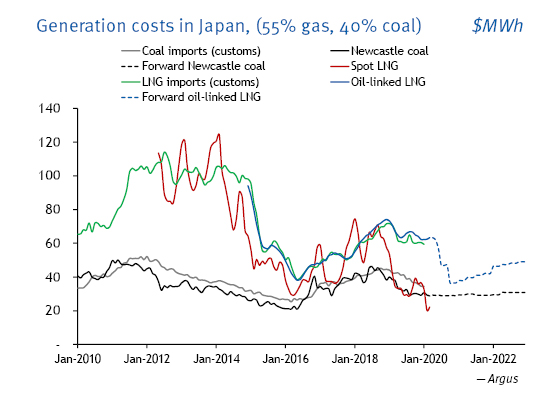 The shift could be even greater in South Korea, where gas imports have recently benefited from a tax adjustment that raised the duty on coal consumption, while cutting LNG import and consumption levies. Generation costs for gas-fired plants running on oil-linked LNG could drop to less than $37/MWh in October-December, according to Argus calculations, which would be lower than for a coal-fired plant running on NAR 6,000 kcal/kg Australian supply at more than $44/MWh. Delivered fob Newcastle coal currently holds more than a $20/MWh cost advantage for power generation over oil-linked LNG in South Korea. 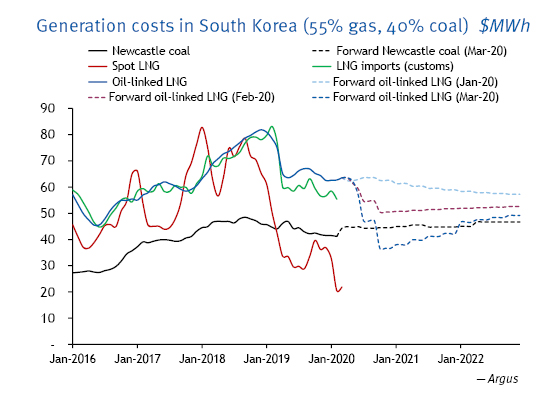 There is still a high level of uncertainty regarding the future value of oil-linked LNG supply this winter, as delivered prices will ultimately be determined by the average price of oil during the price-setting window within the contractual terms of each contract.

For example, the average oil price in April-September will influence the delivered price of term LNG in October in a "601" contract structure that is based on average oil prices across a six-month window, with no lag.

Argus' forward oil-linked des Japan prices are based on prevailing Brent futures prices, which are not a guarantee of future spot prices, and consequently remain indicative at this stage. But risks look to be skewed to the downside, at least in the near term, as analysts have drastically cut back their near-term oil price forecasts in the wake of the Opec deal collapse and coronavirus concerns.

The average forecast for benchmark North Sea Dated or Ice Brent futures for the second and third quarters of 2020 was $38.60/bl and $42/bl, respectively, according to an Argus survey of analysts at a number of banks earlier this month.

US bank Goldman Sachs was the most bearish institution, predicting $30/bl average crude prices throughout the summer, but has since cut its forecast for a third time in quick succession. It now sees Ice Brent crude futures at $20/bl in the second quarter, compared with a forecast of $30/bl on 9 March, which itself was a cut from a $47/bl projection just two weeks earlier.

The average price of May-September Brent futures was around $28/bl, according to Ice settlements on Wednesday 18 March.

Seaborne thermal coal has commanded a cost advantage over oil-linked LNG imports for power generation for more than a decade in some of Asia's biggest fossil-fuel importing countries, favouring coal demand.

The picture is slightly different in South Korea where gas demand has grown strongly amid nuclear disruption and rising power demand, although coal-fired plants have run at much higher load factors. Aggregate coal and gas burn rose to as high as 392TWh in 2018 before dipping to 371.4TWh in 2019, compared with 303.6TWh in 2015, with coal accounting for 40pc of the output growth and gas 60pc in 2015-19. 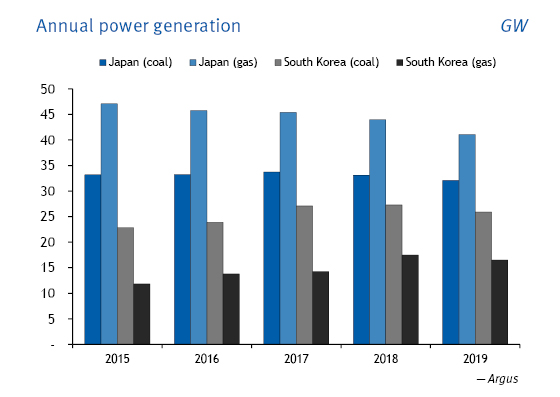 But coal demand could face an increasingly strong headwind as the year progresses if generators are able to optimise their fuel procurement costs by increasing their use of oil-linked LNG relative to term or spot coal supplies.

A weak power demand outlook in Japan, rising nuclear capability in South Korea and incremental gains in renewable capacity in both countries were already weighing on the outlook for northeast Asian fossil fuel demand before coronavirus dealt an additional blow to the global economic outlook. The impact of weaker oil prices on coal and gas demand may, as a result, manifest itself as a proportionally bigger decline in coal demand compared with gas, but with total offtake of both fuels still potentially falling in outright terms.

The potential weakening in prices for oil-linked supply comes as South Korea proactively seeks ways to restrict the use of coal as part of efforts to improve air quality.

The government imposed stringent winter capacity limitations on coal-fired plants for the first time in December 2019-March 2020. Competitively priced term LNG supply, in addition to new nuclear capacity, may give Seoul the confidence to repeat or even expand the policy next winter.

Japanese utilities and traders have more than 80mn t/yr of LNG offtake agreements, according to the International Group of Liquefied Natural Gas Importers (GIIGNL), while Korean state incumbent gas supplier Kogas has more than 30mn t/yr of commitments, with other Korean utilities holding around 5mn t/yr.

Not all of this term supply is necessarily committed to the Japanese and South Korean markets, but the volumes that find their way to northeast Asia could become increasingly difficult to dislodge, potentially shifting the pressure on to spot coal demand later this year.

The lag in the influence of oil prices on linked LNG supply contracts means that some buyers may try to defer offtake during the summer with a view to increasing deliveries later in the year, when weaker oil prices will have filtered through to contracts.

But such an approach could be limited by the fact that South Korean and Japanese imports have historically followed strong seasonal trends. Around 39-46pc of South Korea's annual receipts took place during summer in 2015-19, with 54-61pc arriving in winter. Japanese import profiles are less volatile, with 53-54pc of supply received in winter and 46-47pc in summer, customs data show. 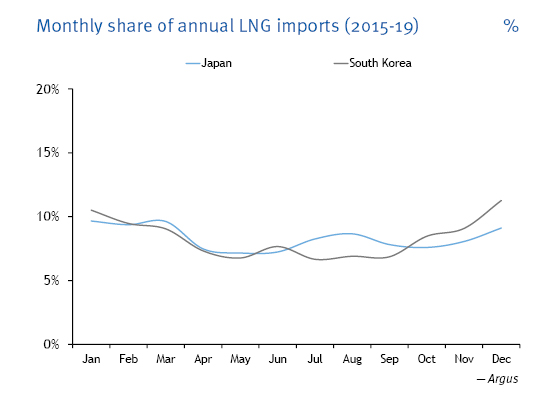 While potentially weaker oil-linked term supply poses a downside risk to coal demand, spot LNG prices in Asia are already theoretically competitive enough with coal in power generation for buyers with the flexibility to accommodate greater purchases. This should maintain additional pressure on the coal market, although weak overall demand for fossil fuels has limited many buyers' need to resort to the spot LNG market for additional supply.