US shale’s decline and recovery trajectory from 2014-2017 is unlikely to be replicated this time around. A different market backdrop, financial pressures and sector consolidation all point towards a “hockey stick” path, with a steep decline and shallower recovery likely for 2020-2022.

The biggest uncertainty facing the oil market for the next 18 months will be the success of governments around the world in containing Covid-19 and gradually allowing the global economy to emerge from lockdown. Only then will the shape of oil demand rebound become clearer.

Thereafter, the supply side of the equation takes on rising importance, with two key questions:


With many moving parts in the oil dynamic, it’s tempting to simply look back at previous price collapses for clues about future market recovery. The contemporary era suggests robust economic rebound, even if trend growth has tended to move down a notch after each macro down-cycle.

And history also suggests that Opec usually cobbles together cohesion in extremis, but that discipline can start to fragment once prices begin to recover. Both these observations may prove to be serviceable predictors of what happens in 2020 and 2021.

However, much greater uncertainty surrounds the trajectory of US shale supply, and simply re-tracing the post-2016 recovery path risks generating an overly-optimistic view of future US shale potential. The sector will undoubtedly recover as prices increase again in future.

But as shale has matured, so the main cast of actors has changed, and the relationship between technology, finance, field economics and company strategy has also evolved. 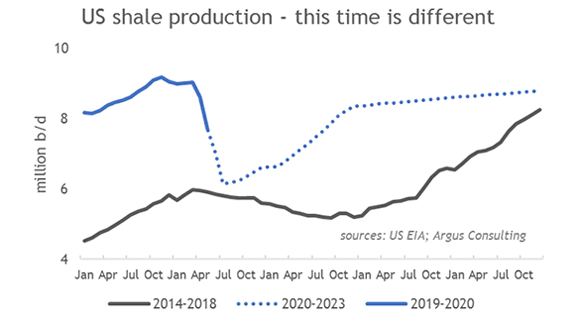 Saudi Arabia’s previous grab for market share in 2015/2016 came against the backdrop of a notional Opec production ceiling of 30 mn b/d.

Shale supply in 2015/2016 proved much less price responsive than had been expected, taking 18 months to decline by 800,000 b/d, with pre-downturn output being regained within a year of recovery, starting in September 2016.

From its low point near 5 mn b/d, shale output then expanded by nearly 4 mn b/d in the period through end-2019.

Amid newly-agreed Opec+ restraint, crude prices rising above $65/bl again, and shale cost reductions via major technological advances and efficiency gains made during the price slump, production was able to rebound sharply.

Shale’s decline this time around has been much quicker and steeper. Output is already down by 1.5 to 2 mn b/d in May from its November highpoint, and could lose another 1.5 mn b/d by August.

As US inland physical prices dropped below $10/bl, spending and activity levels collapsed as breakeven economics were breached, with US oil rig numbers now at barely 250, a level not seen since 2009, before the shale revolution took off.

It’s worth noting too that, unlike 2015/2016, the shale sector enters this downturn with consolidation already well underway, a process that began before Covid-19 and the demand collapse struck. A decade focused on volume growth at the expense of positive free cash flow has left lenders much more cautious towards the sector as a whole.

Major producers are taking over assets from the volume-obsessed, small-scale operators who drove shale’s “Klondike” expansion decade during 2010-2019. “Financial discipline” by 2019 had replaced “drill baby, drill” as the sector’s watchword.

And by April 2020, some 220 North American upstream bankruptcies involving $125 billion of debt had taken place. More insolvencies will likely follow, and further M&A activity too, with smaller, unhedged operators the most vulnerable.

The early-2020 price collapse has seen upstream budgets slashed by 30% or more, and as the sector confronts much sharper legacy well production declines than in 2015, it’s no surprise that production has fallen so steeply.

Nor is there as much room as five years ago to deploy cost reduction and productivity gains to super-charge production recovery, even though several of the major operators envisage restarting activity once they are convinced that prices above $35/bl are sustainable.

This is not the end of the US shale expansion story, rather 2020 may prove in hindsight to have been the end of the beginning. Henceforward, a smaller number of more financially resilient players are likely to drive slower, but more sustainable, supply growth in the years to come.

From the Economist's Chair: Opec+ isn’t over until it’s over...

British Labour Prime Minister Harold Wilson said during the 1960s that “a week is a long time in politics”. If so, a month seems like an eternity for an oil market buffeted by coronavirus and the Opec+ fracturing that took place on 6 March in Vienna.