Welcome to our monthly blog: The US Crude Export Chronicles by Argus senior reporters Eunice Bridges (@eunicebridges12) and Amanda Hilow (@HilowMidpoint). Come back every month for Argus’ take on US crude exports and how they are faring after the unprecedented market crash.

US crude exports are proving much stickier than we all thought. Preliminary data from the US Energy Information Administration (EIA) is showing average flows of 3.25mn b/d through April and the first half of May, slashing initial expectations of a one-for-one fall with US crude production.

Instead, exporters are getting much more creative in the race to place cargoes — even beyond the floating storage trend we saw budding in April. The Caribbean has become a prime outlet for surplus US supply, as an armada of tankers leaves the US Gulf coast for storage hubs in St Lucia, St Eustatius and a previously underutilized storage terminal in the US Virgin Islands with a capacity of 34mn bl.

US midstream firms – which have been building pipelines at a rapid clip to satisfy export demand – are taking a breather in the wake of the Covid-19 pandemic. The companies are cutting budgets by the millions and reducing planned crude capacity expansions by more than 1.4mn b/d through deferrals or scale-backs.

Still, one of the largest projects – an ExxonMobil-led joint venture that would move 1mn-1.5mn b/d from the Permian to multiple locations near Houston – is still on the books as planned. Plains All American, one of the partners, was downright bullish about the project known as Wink-to-Webster. It is “probably the most resilient pipe out there," Plains chief executive Willie Chiang said.

US crude exports fell in March, as expected. But the decline was fairly small considering the sharp plummet in demand as the Covid-19 pandemic forced shut-downs across the globe. 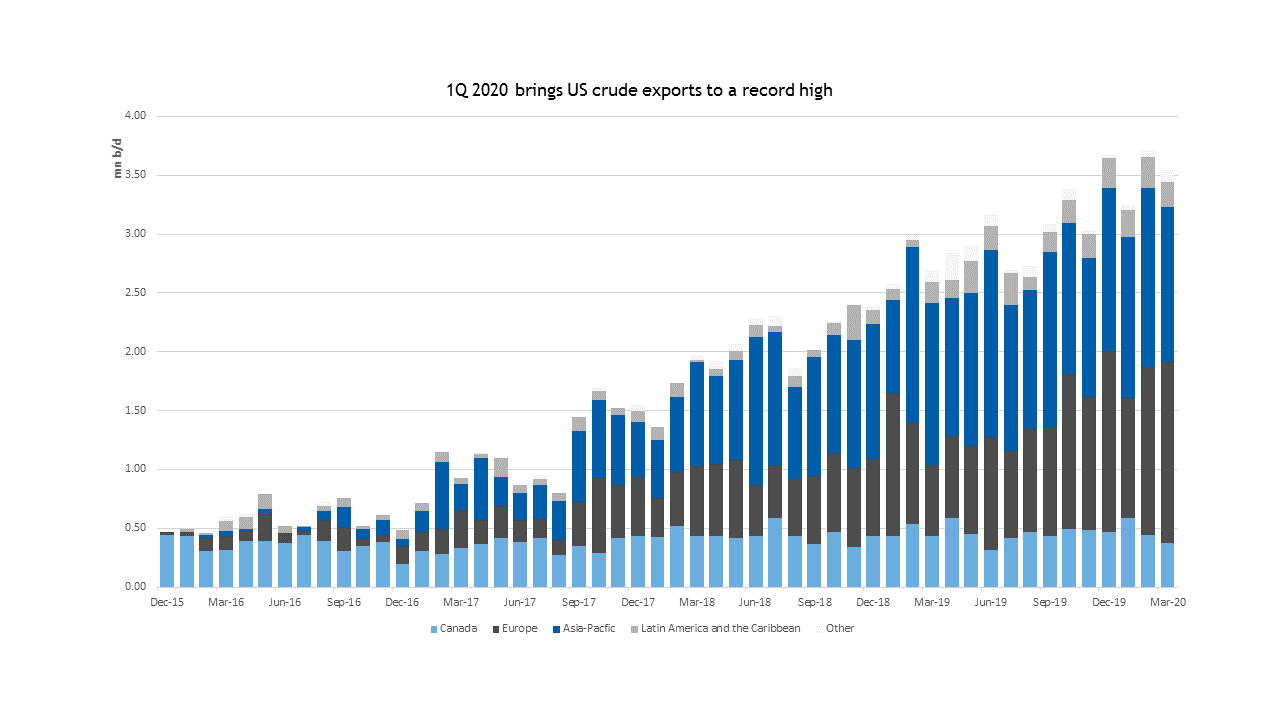 We are waiting anxiously for the next trove of Census trade data, which is coming the first week of June. The data is for April – a turbulent month in the market when crude prices started near $20/bl and crashed below zero. As we noted above, the weekly EIA estimates on US crude exports in April and May have been stronger than expected. We will see if the official monthly trade data matches, giving us a better picture of how the export market is weathering the Covid-19 storm.

Preliminary tracking data indicates we might see flows to China continue to rise, with at least 220,000 b/d seen departing the US Gulf coast in April for destinations in Yingkou, Zhoushan and Qingdao. India, Taiwan and South Korea have also steadily picked up some cargoes, while flows to Europe appear comparatively meek.

We hope to see you again for next month’s analysis on US crude export flows and dynamics. The waters are still rough, but we wish you smooth sailing.