Combined coal-fired generation in key global markets rose on the year in July-September as a result of a swift economic recovery in China, but overall coal burn remains below 2019 on a year-to-date basis.

Aggregate coal-fired generation in China, France, Germany, India, Japan, Spain, Taiwan, Turkey, the UK, South Korea and Vietnam inched up by around 2pc, or 17GW, on the year to 770GW, according to Argus' estimates based on data obtained from power generation companies and grid operators. 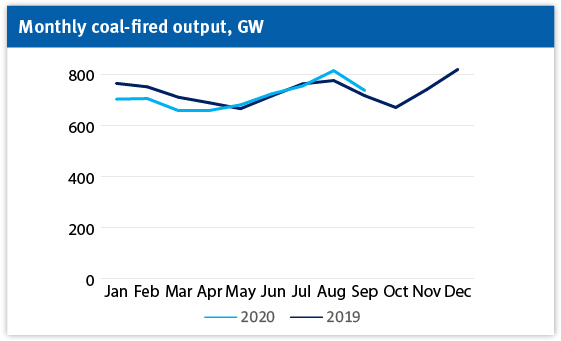 This is equivalent to a 14mn t increase in NAR 6,000 kcal/kg coal consumption for power generation assuming a 38pc efficiency. But overall coal consumption among these countries was still lower on the year in January-September at an average of 717GW, implying a 25mn t drop in coal burn to 1.78bn t during the period. 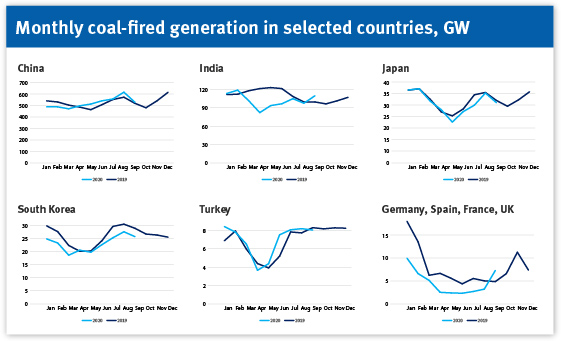 China was the key driver of growth in third-quarter coal burn as the country's strong economic recovery pushed power demand higher. Its gross domestic product (GDP) shrank by 6.8pc during the first quarter of the year, as the Covid-19 pandemic halted the country's long economic growth trend, but recovered immediately after restrictions were eased and grew by 3.2pc on the year in the second quarter and by 4.9pc in the third quarter.

But higher coal burn failed to boost demand in the seaborne coal market, as the country has applied strict limits on coal imports this year. China has often sought to restrict coal imports in recent years, but the limitations typically intensified at the end of the year and failed to prevent growth in annual receipts.

But seaborne coal receipts have been falling on the year since May, with the year-to-date deficit in thermal coal imports widening to 8.21mn t in September, driven by restrictions on Australian coal in particular.

Stronger domestic coal output has offset weaker imports and supported strong coal burn across China this year, although the availability of domestic coal remains tight and has driven local prices higher. Some Chinese buyers continue to seek coal from alternative origins including South Africa, as well as Russia and Indonesia, suggesting firm demand for seaborne coal in the near term, although efforts to boost domestic output will continue to weigh on seaborne demand in the medium term.

Coal burn also stood firm in October as power demand has recovered, but steady imports in the remaining months of the year are unlikely to offset the steep declines recorded earlier in 2020. The country's average coal-fired output was down by 10.5GW on the year at 102GW in January-September. 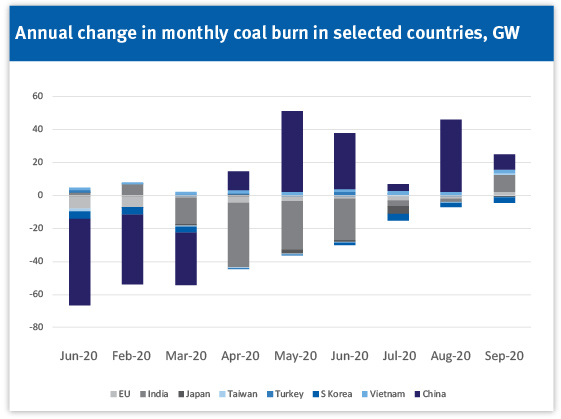 Elsewhere in Asia-Pacific, coal burn was little changed on the year in many key demand hubs, with the exception of South Korea, where coal burn edged down by 3.5GW, or 11pc, on the year to 26.1GW in the third quarter. Nuclear availability rose on the year despite unplanned outages, while increasingly favourable economics for gas-fired generation put additional pressure on coal demand.

Japanese coal-fired output edged down by 2GW on the year to 32GW during the third quarter, according to Argus estimates, posting a similar year-on-year decline as overall power demand, which fell to 104GW from 106GW during the same period. Nuclear outages in Japan have boosted the short-term outlook for thermal generation in the country, but lower costs for gas-fired generation is a potential headwind for coal-burn.

Taiwan's third-quarter coal burn was slightly higher on the year at 12.4GW, up from 11.8GW a year earlier, in line with a 1.1GW increase in overall power demand during the period.

Turkish coal-fired generation was little impacted by the coronavirus this year as the country only applied national lockdown measures during the spring, when hydropower output typically reaches its highest level of the year.

Coal-fired output averaged 8.1GW in July-September, up from 8GW during the same period earlier, which already implied a utilisation rate of more than 90pc for the country's 8.9GW installed capacity.

Coal burn softened slightly in October, as outages weighed on available capacity, but coal-fired output is likely to reach an all-time high this year — coal is set to remain ahead of gas in the merit order until the end of 2020.

Average coal-fired output in Germany, France, Spain and the UK fell to 4.4GW during the third quarter from 5.1GW a year earlier. And overall coal-burn during the first nine months of this year fell to 4.7GW from 7.7GW last year.

Coal has been able to regain some of its competitiveness against gas in the German power mix recently, but this is unlikely to significantly boost coal burn as power demand may be pressured by the new wave of lockdown measures in the country recently.

The Petcoke Podcast: Russian petcoke markets in 2020 and beyond

In this episode, The Petcoke Podcast examines the latest trends for the Russian petroleum coke markets.