Global base oil prices have extended their rise on the back of unusually tight supply-demand fundamentals. Many refiners have been unable to take advantage of the price strength because they are operating at low run rates in response to weaker fuel margins. The lack of supply response has added to the tightness.

Heavy-grade base oils have risen even faster than light-grade prices in all the key markets. In Asia-Pacific, the premium of Group I SN 500 over SN 150 has risen to $140/t. The premium was up from an average of less than $10/t in 2019 and the highest in more than two years.

Heavy-grade prices have been rising in response to unusually tight supplies from key sources like Russia and Iran. Some production capacity has closed in South Korea. China has plentiful supplies of light grades. It remains structurally short of heavy grades. 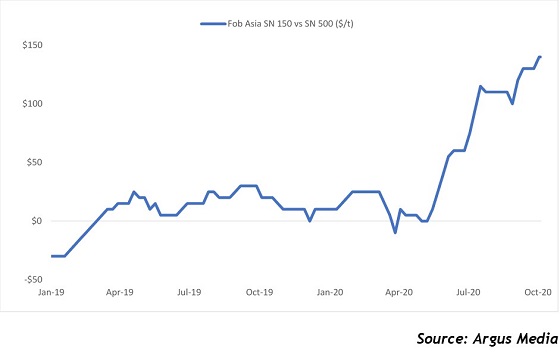 Group III base oil prices have risen even faster than Group II prices in Europe and the US. The trend has pushed the premium of Group III 4cst over Group II N100 in the US close to its widest level since 2017.

Group III prices have risen faster than other grades with a rebound in engine oil demand in the US and Europe from the end of the second quarter. Stricter engine oil specifications in a growing number of markets have added to the structural rise in demand.

Low run rates have curbed Group III base oil supplies. The time lag between the shipment of supplies from markets like Asia-Pacific to outlets like Europe and the US have delayed further the supply response. A steady flow of plant maintenance from the end of the first quarter has also curbed supplies. More maintenance is scheduled next year. 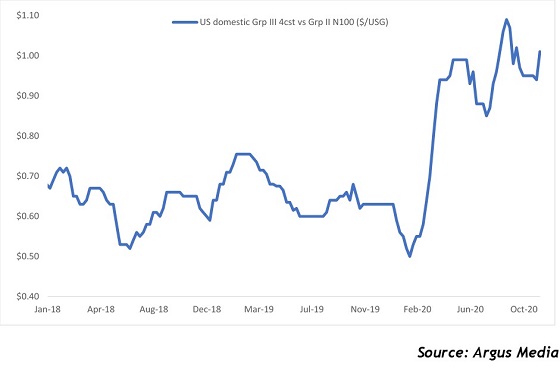 Rising Group I bright stock prices have failed to spur any significant supply response for this product. Group I base oil output has instead remained weak in markets like Latin America, the Mideast Gulf and Europe.

Tighter supplies have contrasted with steady demand everywhere from China and southeast Asia to the Mideast Gulf, Africa and Latin America. The tight supplies have forced buyers in these markets to compete for any supplies wherever they were available. The trend has added to demand and upwards price pressure.

Brazil base oils output falls in 2020 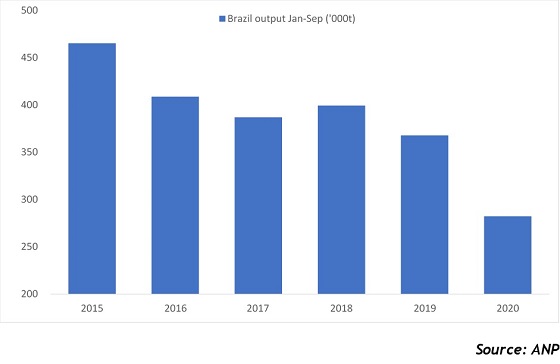 Strong overseas demand has pushed base oil export prices to increasingly strong differentials to domestic prices. The trend has closed off most arbitrage opportunities. An exception is Group I Baltic and Black Sea prices. The discount of fob Black Sea SN 500 to cfr UAE prices has widened to more than $160/t, from $120/t in September. The discount was the widest since early 2018.

The open arbitrage reflected unusually tight supplies in the Mideast Gulf market. The supply tightness in Russia is also easing with a seasonal slowdown in domestic demand and the completion of plant maintenance during the third quarter. 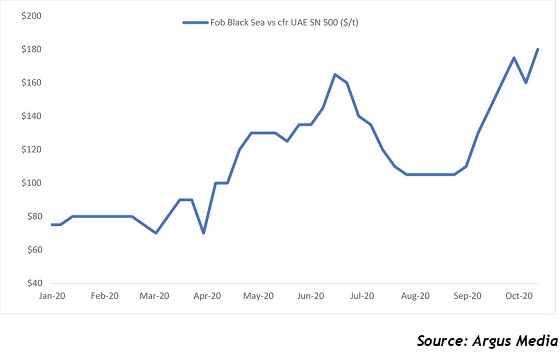 Global base oil prices have extended their rise on the back of a sustained supply tightness in all the key export markets. This trend is showing little sign of changing for now.