In this episode of The Crude Report, Nicholas Watt, Freight editor for the Americas, is joined by Michael Connolly, Freight reporter, to discuss the freight side of US crude oil exports.

Nicholas Watt: Hello, and welcome to The Crude Report, Argus’ podcast series on global crude oil markets. My name is Nicholas Watt, the freight editor for the Americas, for Argus. I'm joined here by my colleague, Michael Connolly. We'll be discussing the freight side of US crude exports. So let's jump right in, shall we? 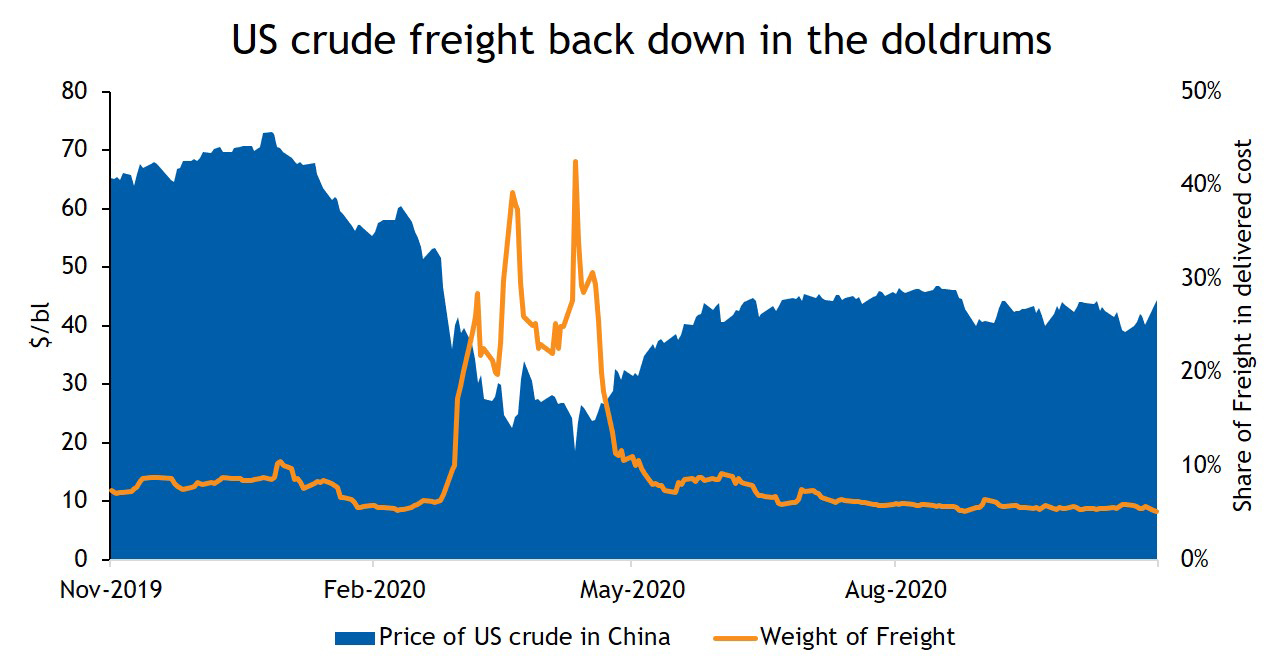 Earlier in the year, we saw crude tanker rates rise to near-record levels, largely because of surging floating storage demand. At one point, freight's share of the deliberate cost or the weight of freight of US crude into China nearly hit 50%, but this has changed with the weight of freight falling back down to its more typical 5% to 10%.

Michael, what are you seeing in the freight market right now? How is the Covid-19 pandemic affecting freight rates for US crude exports now?

Michael Connolly: Thanks, Nick. Yeah, the Covid-19 outbreak has weighed heavily on crude export demand globally, and consequently, this has weighed on US crude tanker freight rates as well. At the moment, rates are near year-to-date lows on all routes, and rates in the past month have not benefited from the typical seasonal boost that usually begins in late November due to increased oil demand because of winter in the Northern Hemisphere, and that benefit has not occurred because of continued lockdowns in Europe and the Americas. And looking at rates right now, the US Gulf coast-to-China very large crude carrier rate [is] apparently down by half year over year, and the US Gulf coast to Europe Suezmax rate is down by 59%.

We have, however, seen a recent jump in Aframax rates to the highest levels in more than a month. There's been steady demand for that vessel class over the past several weeks, although rates for Aframaxes are still at very depressed levels, they're down more than 80% from year-to-date highs.

Nicholas: Interesting that US crude exports are actually up year over year, even at a time when the pandemic is hitting global oil demand. We'll get to this more later. The falling oil demand along with the Saudi-Russia crude price war earlier this year helped to cause floating storage volumes, including for US crude, to surge starting in April and peak within two months after that. Michael, can you tell me what is the state of US crude floating storage right now?

Michael: Right now there's currently four VLCCs storing US crude in Asia, so that's roughly 8mn bls. But if you look at specifically in the US Gulf coast and Atlantic coast region, crude floating storage is only about 550,000 bls, according to Vortexa, which is down significantly from the peak of slightly more than 21mn bls in the region in late April. It was during that major spike in crude floating storage that US tankers reached their year-to-date highs. Argus Freight data shows that the US Gulf coast to China, very large crude carrier rate, hit $19.5 million on April 1st compared with just $4.8 million now.

The fall in floating storage, not just in the US but globally, has played a major role in dragging down freight rates because it led to significant increase in available tonnage supply.

Nicholas: Okay. And so we mentioned global crude floating storage. What is the state of that right now? You said it dropped a little bit.

Nicholas: Coming back to US crude exports and following up on what you said about how exports are actually increasing out of the US, what are the main types of vessels taking cargoes out? And is it any different compared to before the pandemic?

Michael: The most active vessel classes in the US crude tanker market are Aframaxes, Suezmaxes, and very large crude carriers.

In 2020, Aframaxes and Suezmaxes have been most active on Europe-bound journeys with about half of the shipments for those vessel classes going there. For VLCCs in the US, however, roughly 90% of export volumes on that vessel class in 2020 have gone to Asia. Compared with last year before the pandemic, we've seen an increase in Suezmax shipments going to Europe, as Asia was the top destination for Suezmax voyages out of the US in 2019.

Aframaxes have also seen a slight increase in the proportion of their shipments going to Europe, although Europe was still the top destination for Aframax shipments out of the US in 2019 as well.

VLCC destinations have been stable year over year.

Nicholas: Oh, that's very interesting. You already mentioned some of the routes, but can you tell me a little bit more about that? What are the main destinations for US crude?

Nicholas: Interesting that China's now the leading buyer of US crude. The depressed freight market is making it more economical for importers, such as China as well as South Korea and India to source barrels from more distant producers, such as US. The US Gulf-to-China route is perhaps...I think it is the longest haul route in the global crude trade. But does this increase in Chinese purchasing of US crude also have to do with phase one of the US-China trade deal that was agreed at the beginning of the year?

Michael: Yeah. The trade deal has definitely played a big role in the jump in US crude to China. Another role is that China has recovered fairly quickly from the Covid-19 pandemic compared with countries in the West. So they've increased their imports more rapidly. And then now just looking at China's share of US crude exports it's risen, like I said before, from about 4% in 2019 to 15% this year, and their total volumes have risen from 62mn bls in all of 2018. There was 42mn bls all of last year and this year that number is 135mn bls. And looking at what portion of China's total crude imports is made up of US barrels, that number has risen to 4% this year from 1% last year.

Nicholas: And also sort of on the political side, President-elect Joe Biden wants to cut US greenhouse gas emissions. Much has been discussed about how his administration may affect us crude exports, possibly limiting them in the future. But how do you expect his presidency to affect US crude export freight rates?

Michael: Yeah. Well, in the short term, I wouldn't expect it to have that much of an impact, but if you look a few years down the line, you know, 2022, 2023, once he's been in office for a few years, it's possible that some of his expected policies to move away from fossil fuels and cut US fossil fuel production, that could begin to weigh on exports and that would consequently weigh on the dirty freight market. Other things to consider outside of fossil fuel production are his treatment of China. It's possible, I've heard from some people that the China trade deal that was agreed to with Trump could sort of be done away with. They wouldn't really have to live up to it now that Biden's in office, but then that could potentially hurt US crude exports as well.

Nicholas: We focus plenty on US crude exports, which for now appear overall quite resilient, but let's take a look at other exporting countries in the Americas, such as Brazil, Ecuador, Venezuela, Colombia, Mexico, and now Guyana, which has been exporting crude for just a pretty short period as of now, how have exports out of these regions changed, and how has that affected the freight market?

Michael: Crude exports out of Latin America, similar to the US, have been resilient in 2020 compared with 2019 and were roughly flat at 4.3mn b/d in the first 10 months of this year.

Looking specifically at Mexico, Colombia, and Ecuador, they've all had relatively steady crude export volumes. Brazil, on the other hand, has seen its exports rise by about 19% to 1.34mn b/d and this has largely been supported by increased shipments to China and Europe. Looking at Venezuela, its export volumes have fallen by roughly half to about 450,000 b/d and this is mainly because of US sanctions on the country.

Freight rates in the region, like in the US have been depressed because of the abundant global tonnage supply. The Brazil-China very large crude carrier rate is currently down by 57% year over year at slightly more than $12 per ton.

Nicholas: And looking forward, what's in store for crude freight rates in the next year? Do we expect the depression to extend or will volatility return?

Michael: Yeah. Well, oil tanker demand is highly related to oil demand and oil demand is hard to predict because of a lot of it depends on how effective the vaccines are. The latest projections from the IEA show that oil demand will increase to 97.1mn b/d next year, compared with 91.3mn b/d this year, but that's still down from 101.1mn b/d in 2019. On the supply side, net fleet growth is projected to be at about 2% with the continued lack of new bill interests expected to continue. So it's positive that tanker supply won't be growing by that much, but it's still going to be growing. Overall, I would expect freight rates to remain depressed next year because of the after-effects of the Covid-19 pandemic which will linger and continue to weigh on demand like stated in the IEA projections.

Nicholas: Well, I think that about wraps it up. Thank you very much, Michael, for the conversation. For more information on Argus Freight pricing, news, and analysis, both in the US and globally, consider subscribing to our Argus Freight series. You can find more information on this service at www.argusmedia.com. Thanks for tuning in, and we look forward to you joining us on the next episode of The Crude Report.

The Crude Report: Why penalize running the lights?

The six stand-alone splitters designed to refine ultra-light crude oil condensate at the US Gulf coast should have operating advantages in an environment where gasoline is king – but this theory hasn't quite panned out.