Covid-19 has forced a drastic reappraisal of US shale oil growth prospects, amid an economic downturn that has complicated expectations for a presidential election next month that could have even longer-term implications for oil and gas, writes Haik Gugarats.

This series of country profiles from Petroleum Argus provides a snapshot of how key oil and gas producers and consumers are being changed by the Covid-19 crisis.

US “energy dominance” — the notion of ever-rising crude production turning the country into a net oil exporter — has always sounded like a motivational goal for the world's largest oil consumer, and it has taken a pandemic-driven slump in demand for US oil producers to rediscover their more traditional place in the global supply pecking order. 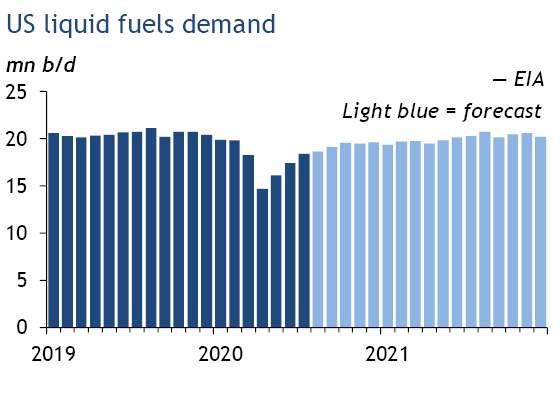 Domestic oil demand will not rise to last year's levels until 2022 at the earliest, according to the US Energy Information Administration (EIA). But even that forecast depends on the US' ability to finally curb the spread of Covid-19 and revive an economy hit by a deep recession — and the virus has so far surprised mostly to the downside. A nascent recovery in US crude output, after it plunged by an estimated 2.7mn b/d in April-May, is masking deep pain across the shale industry as cuts to capital expenditure (capex) across the sector suggest that few companies will shift quickly back into growth mode. A majority of oil executives in a recent survey by the Federal Reserve Bank of Dallas says they believe peak US oil production has passed. 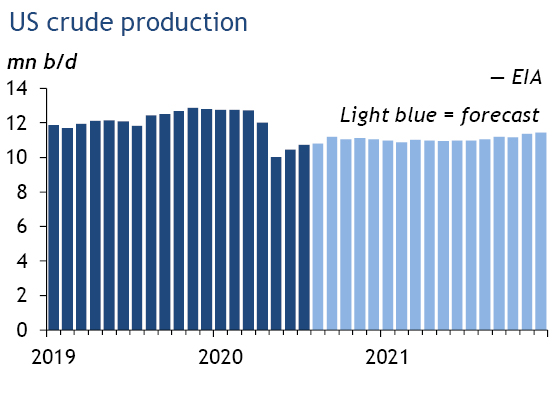 In theory, US shale output can recover quickly because so much infrastructure and drilled but uncompleted wells are already in place. But the industry must keep drilling new wells just to maintain existing capacity — output from shale falls much faster than from conventional oil wells. With WTI barely above $40/bl, few producers are motivated to spend more, even if they were not facing pressure from investors to stop ploughing profits into expanding capacity and to return cash to shareholders.

Contagion from the demand slump is not limited to the upstream. Midstream companies also are slashing spending and delaying projects in the midcontinent and the Gulf coast. Downstream, US refiners are consolidating cash to weather a demand collapse that is battering their weakest plants — at least 380,000 b/d of US refining capacity has been idled in the wake of the Covid-driven demand plunge.

Oil and gas producers have historically viewed Washington as a source of burdensome regulations, but many have now turned to the federal government for financial support. But the biggest assistance from the government came via US president Donald Trump's facilitation of the Opec+ production cut deal that has helped stabilize the global oil market. That US producers' fortunes depend on decisions made in foreign capitals was a point somewhat overlooked as the country briefly turned into a net oil exporter last year. 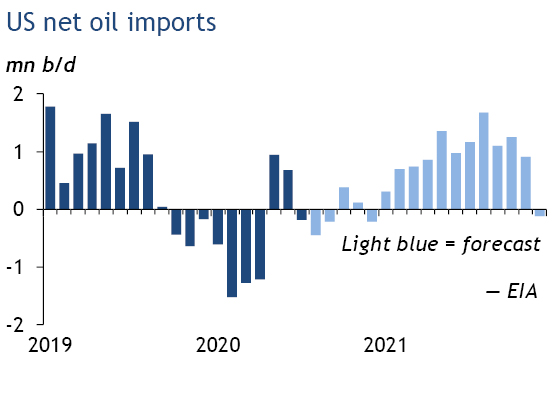 Next month’s US presidential election adds to concerns for the energy sector. Democratic candidate Joe Biden has promised to ban new oil and gas permitting on federally owned offshore and land. But the former vice-president says a hydraulic fracturing ban is not on the table, and that he is focused more on cutting power-sector CO2 emissions and restoring previously approved fuel-efficiency standards in cars. Oil executives in the Dallas Fed survey are privately airing concerns about the potential hit to their bottom lines if Democratic presidential candidate Joe Biden wins the election, even as they acknowledge dreary conditions under the Trump administration.

It is difficult to imagine Biden working the phones with the leaders of Saudi Arabia and Russia to help work out an Opec+ deal. At least one of his policy initiatives — reopening talks with Tehran — would complicate management of the Opec+ deal next year, should it lead to Iranian crude re-emerging on the market. And returning the US to the Paris climate accord could entail closer co-operation with the EU on taxing oil imports from countries with less stringent climate policies. But the reality is that the US oil and gas industry's near-term growth prospects are uncertain no matter what the outcome of November’s vote.

Previously in this series

Petroleum Argus
Petroleum Argus is our flagship business intelligence service with an international reputation for providing thought-provoking and independent analysis of the global oil and gas markets.
Learn more

The pandemic has dealt Riyadh a triple blow just as Saudi Arabia's de facto leader was trying to steer the country in a new and different direction, writes Samira Kawar.