Welcome back to our monthly blog: The US Crude Export Chronicles, by Associate Editor Amanda Hilow (@HilowMidpoint) and Senior Reporter Eunice Bridges. Come back every month for Argus’ take on US crude exports and how they are faring in what is becoming an extremely shaky Covid-19 recovery.

Hurricane season seems to be never-ending as another big storm hit the US Gulf coast this week, threatening ports and disrupting shipping. Hurricane Zeta (that’s right, they are running out of names) made landfall on 28 October on the Louisiana coast.

Looking through the prism of US exports, the Beaumont-Port Arthur hub in Texas and its export terminals was spared as the storm track put the area of potential impacts further east. The Louisiana Offshore Oil Port (LOOP) — still the only US port where you can fully load a very large crude carrier (VLCC) — was closely monitoring the storm and implemented an inclement weather plan. But LOOP made no indication it was shutting operations as the storm swept through the region.

It has been a while since a new Permian pipeline started service. But it happened this month.

The lyrically-named “Wink-to-Webster” joint venture pipeline, headed by ExxonMobil, started service on a main segment from Midland in west Texas to Houston. The overall system will have a capacity of 1.5mn b/d, but it is unclear how much is moving right now.

The Wink-to-Webster project involves a whopping seven companies including Enterprise Products Partners, Plains All American Pipeline, and MPLX. The pipeline section that started service was built by Enterprise and should pump up crude exports out of Houston.

And as the incremental volume hits the US’ largest refining hub, logistical spreads between Houston-area terminals are narrowing to near zilch. The average price of WTI at Enterprise’s Echo terminal has closed its discount to Magellan’s competing East Houston (MEH) terminal to just 7-8¢/bl compared to 25¢/bl last quarter. And WTI trading at the nearby Genoa and Speed Junctions is pegged around parity to both Echo and MEH deals.

Centurion also said this month that it will start its 175,000 b/d Augustus oil pipeline on 1 December, moving more Permian basin crude to long haul pipelines. Centurion is a subsidiary of Lotus Midstream, another partner in Wink-to-Webster.

Meanwhile, one of the largest US midstream companies is seeing a major change at the top. Energy Transfer’s longtime chief executive Kelcy Warren is stepping down from the position at the end of this year. Warren, who co-founded the company in 1996, will remain as executive chairman.

Hurricane Laura and tropical storm Marco were no match for US crude exports, apparently. The storms that hit the Gulf coast in August disrupted some shipping but largely spared the big export hubs. As such, US crude exports held steady above 3.2mn b/d, according to the latest Census Bureau monthly trade data. The strong performance came with China as the top buyer of US crude at 570,000 b/d. If you’re counting, that is the fourth straight month that China was the number one taker of US crude.

The Census will release fresh monthly trade data in early November. Those numbers will be for September, when Hurricane Sally and tropical storm Beta hit the Gulf coast. We’ll see if exports stayed above that 3.2mn b/d marker, despite all the headwinds.

US-to-Europe crude flows were poised to fall as fob prices at the US Gulf coast reversed their relationship to delivered values, discouraging some trade activity as fob WTI values rose to a rare premium against the price for the same grade at Rotterdam. 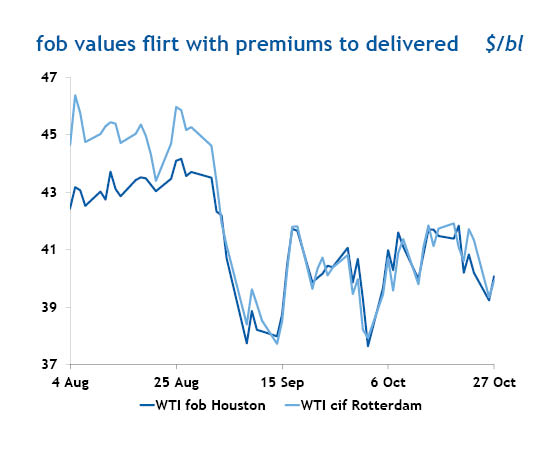 Libyan exports are returning to “normal levels” after an eight-month blockade, threatening to displace US crude cargoes further. But returning demand, while shaky, in Asia-Pacific hubs China and India could swallow the difference and keep the general US export arbitrage afloat.

We’ll be watching how the market resolves itself, but in the meantime, we wish you smooth sailing in these choppy waters and an end to the 2020 hurricane season.