In this episode of the Argus Crude Report, Alex Endress, US Gulf coast crude markets reporter, is joined by Brett Holmes, who covers Canadian crude markets.

Alex Endress: Hello everyone and welcome to the Argus Crude Report, a podcast series on global crude oil markets. I'm Alex Endress for Argus Media and I cover US Gulf coast crude markets. Joining me, though, is Brett Holmes who covers Canada, and today we're going to chat about how Texas recently imported a record amount of Canadian crude.

So Brett, why don't you kick off things by just telling us a bit about what's going on in Canada on the production side over the past few months.

Brett Holmes: Hey, Alex, thanks for having me, and for sure. So here's what you kind of need to know, and we've covered a little bit of this before, but we'll get into some new stuff, too. So, just to recap, [the] Covid-19 pandemic pushed demand for Canadian crude way down, especially for heavy crude in the typical demand centers in the US, so we're talking about Illinois and Texas, two of the biggest ones. So with buying interest drying up in the last part of the first quarter and into the second quarter, Canadian producers filled up storage and the only option left, really, was for many to shut in production. So even the heavy crude production that continued to make it to market was selling at record lows despite half a million barrels of shut ins. So the heavy sour benchmark, WCS or Western Canadian Select at Hardisty, Alberta was suddenly less than $4/bl as losses mounted in Canada's oil patch.

So one takeaway from me, and something that I want to share with the listeners is that Canadian producers have become fairly nimble in their ability to wind down and then start up production again. So this pandemic is not really their first rodeo, as we've discussed before - the Canadian market has been prone to supply shocks, pipeline upsets, government intervention. So they've had a little bit of practice with this, and have been able to respond to a rebound in prices. And spot activity for Canadian crude in your markets, down in the US Gulf Coast has seen a bit of resurgence as a result, right?

Alex: So spot liquidity did dry up as the pandemic hit, but activity for Canadian crude does seem to be recovering. Earlier this year, backing up, before the pandemic, WCS and Cold Lake volumes at the Gulf coast reached a record high at just over 260,000 b/d in the April trade month. But as demand destruction due to Covid-19 backed up volumes to the well head, we actually recorded the lowest total in the May trade month at about 35,000 b/d. So more specifically, in the June trade month, Argus actually recorded no new WCS spot volume, and that's despite Cold Lake mounting to just over 90,000 b/d. But since then, spot liquidity has generally trended upward for each grade, and, in fact, between WCS and Cold Lake, we recorded about 230,000 b/d in the September trade month, which was the second highest total in Argus records. The October trade totals were around 180,000 b/d, just dipping a bit, but still much larger than the lows recorded over the summer. 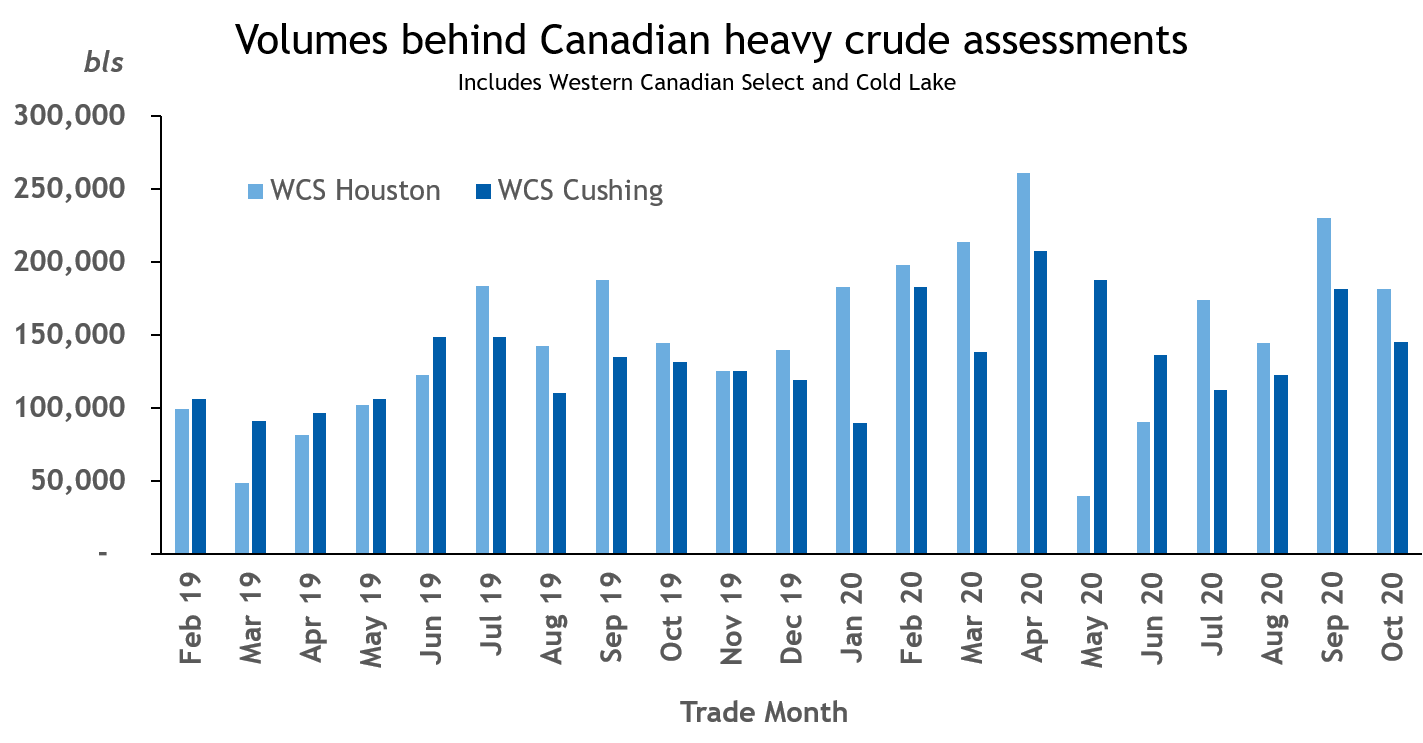 So spot activity does seem to be trending upward, and my understanding is that one of the drivers is out of production. Is that what you've also been seeing up north, Brett?

Brett: Definitely. So heavy crudes has rebounded to about $30/bl and other markets have been fairly stable, so I'd say $30/bl is a rebound. If you asked me a year ago, that wouldn't sound like much of a rebound, but considering we started at $4/bl earlier this year, producers will take it. So volatility has been a trademark in the Canadian market for years. I know you've seen a couple of production upsets in the oil sands region just recently give an added boost to prices. But on the whole, producers seem to be more optimistic about finding a home for their barrels, and heavy crude production in Alberta was up again in August, actually. It's about 1.8mn b/d, which is the third consecutive increase and a good sign that operators are finding profit somewhere.

So shippers in June, as we touched on right at the outset of this podcast, sent a record amount of Canadian crude to Texas. It was 474,000b/d. And that's particularly impressive, given the spread between WCS in Houston and WCS in Hardisty. It was only about four dollars per barrel, and that's actually the tightest spread on record. So in July, that spread widened slightly, and we saw in the most recent data set from just a few days ago that yet another record was hit in July. An average of 489,000 b/d was imported into Texas, so we're talking about half a million b/d of Canadian crude going into Texas. But from what I gather, not everything is staying on shore, right? Are we seeing both domestic and foreign buyers get back into the market down there?

Alex: So that's right. We are seeing Canadian export demand materialize, and so far this year, it looks like about 10.3mn bls of WCS and Cold Lake left Texas ports for international markets, and that includes China, India, South Korea. So far, we actually have two more VLCCs expected to load 4.2mn bls of possible WCS. That could head to Asia this month according to data compiled by Argus. So with more export activity expected, it would make sense that spot liquidity could also grow, but there are also some domestic factors at work. So in particular, we have refineries that are coming back online after they were shut for maintenance following Hurricane Laura's landfall that was just east of the Texas-Louisiana border on the 27th of August. And of course, that will add more demand, and a combination of Canada's Kearl project coming back online, that'll add more volume. So it makes sense that liquidity and trade volumes would continue to increase at the coast. But to sort of sum things up, it sounds like we've got more production on the way, potentially some demand returning with liquidity on the rise, and also export demand materializing. Brett, did I miss anything?

Brett: I don't think so. We covered a fair bit of ground, and, of course, we could keep going. Canada's a pretty big country, and there's a lot to talk about, but we'll have to dig into some more stuff next time.

Alex: Okay, great. Well, Brett, thanks for chatting. And listeners, if you're in need of more in-depth daily coverage of Canadian crude oil markets, consider subscribing to Argus Americas Crude. You can find more information on this service at www.argusmedia.com. Thanks for tuning in, and we look forward to you joining us on the next episode of The Crude Report.

Saudi Aramco announced its official prices for October-loading crude exports last week, and this episode discusses the impact of these prices on the Asian market.