It has been a challenging year for ammonia producers, with spot prices plummeting in the wake of the Covid-19 outbreak and industrial demand slashed across several key import regions.

Following a series of production cuts, prices have begun to recover steadily, especially in east of Suez markets. But in Trinidad – one of the world’s largest ammonia export regions – sellers continue to struggle with low pricing and are operating at reduced levels until the market recovers. Prices are starting to slowly improve, but the region remains heavily discounted against other leading supply regions in Russia, the Middle East and southeast Asia. 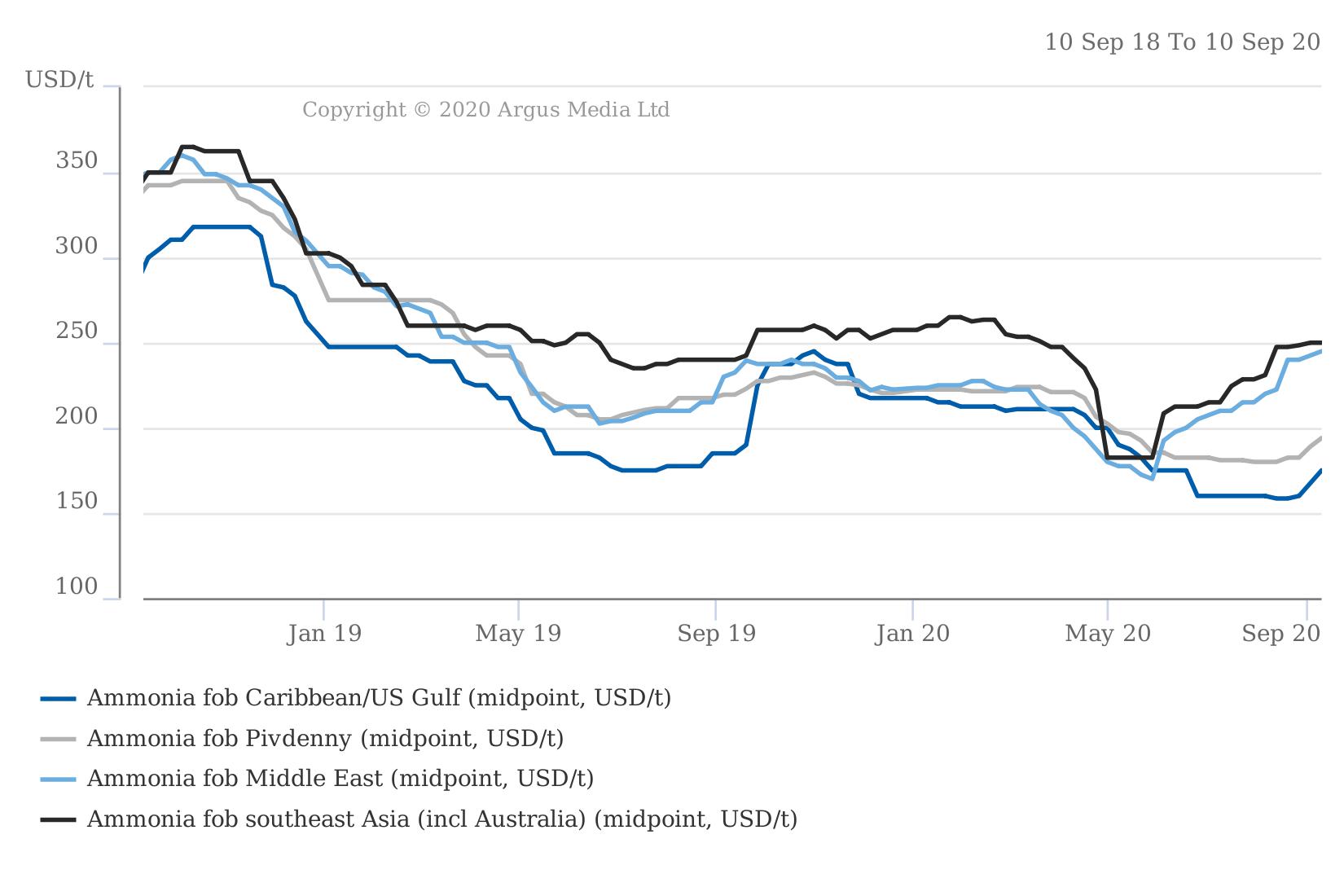 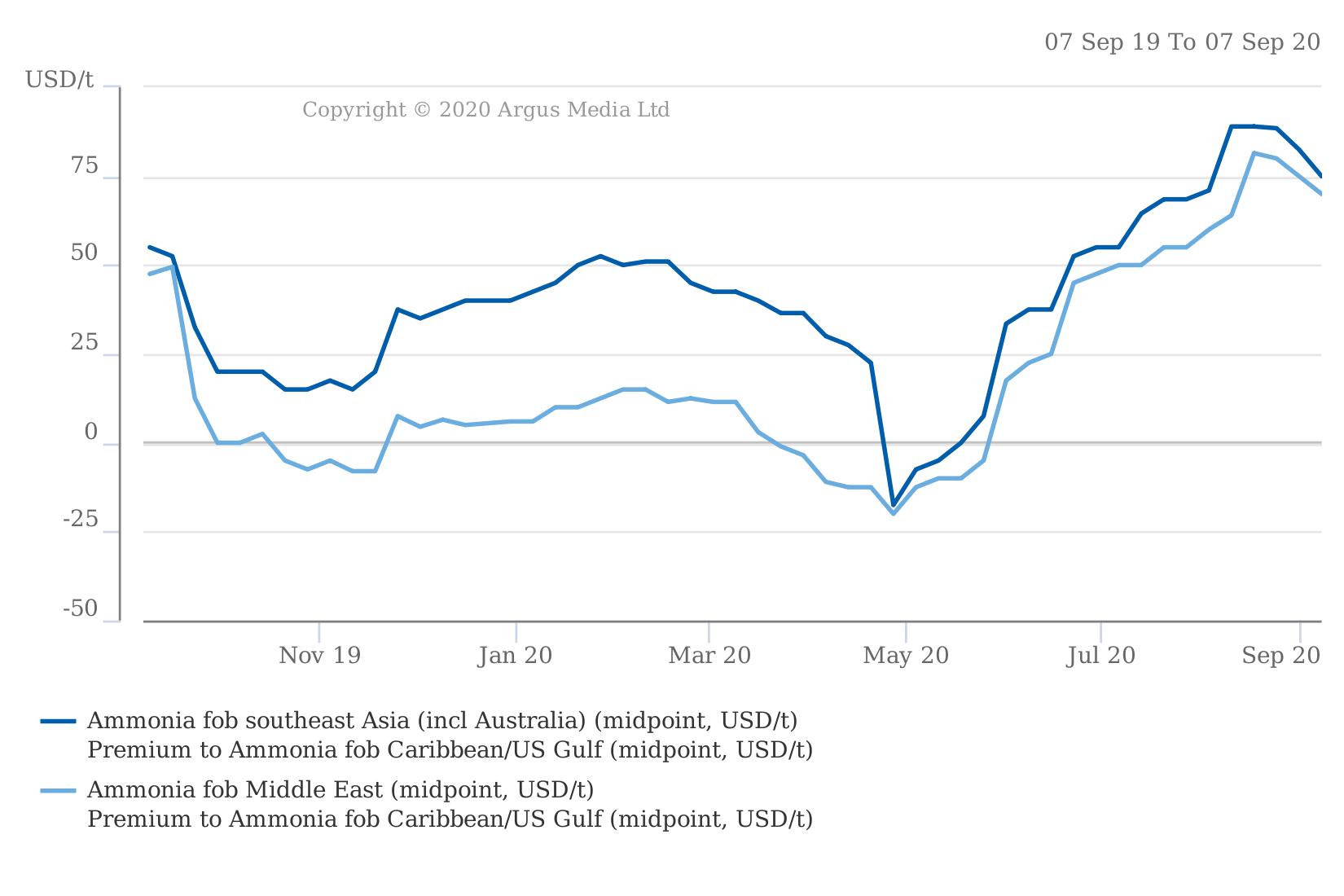 The high fob prices in the Middle East and southeast Asia have been driven by a cutback in supply at several ammonia plants (see table below) and a recovery in demand from India and east Asian buyers. The lack of spot availability from Saudi Arabia, combined with significant outages in Indonesia and the removal of export tonnes from Egypt, left many traders short on options to fulfil contractual deliveries and spot prices subsequently spiked. 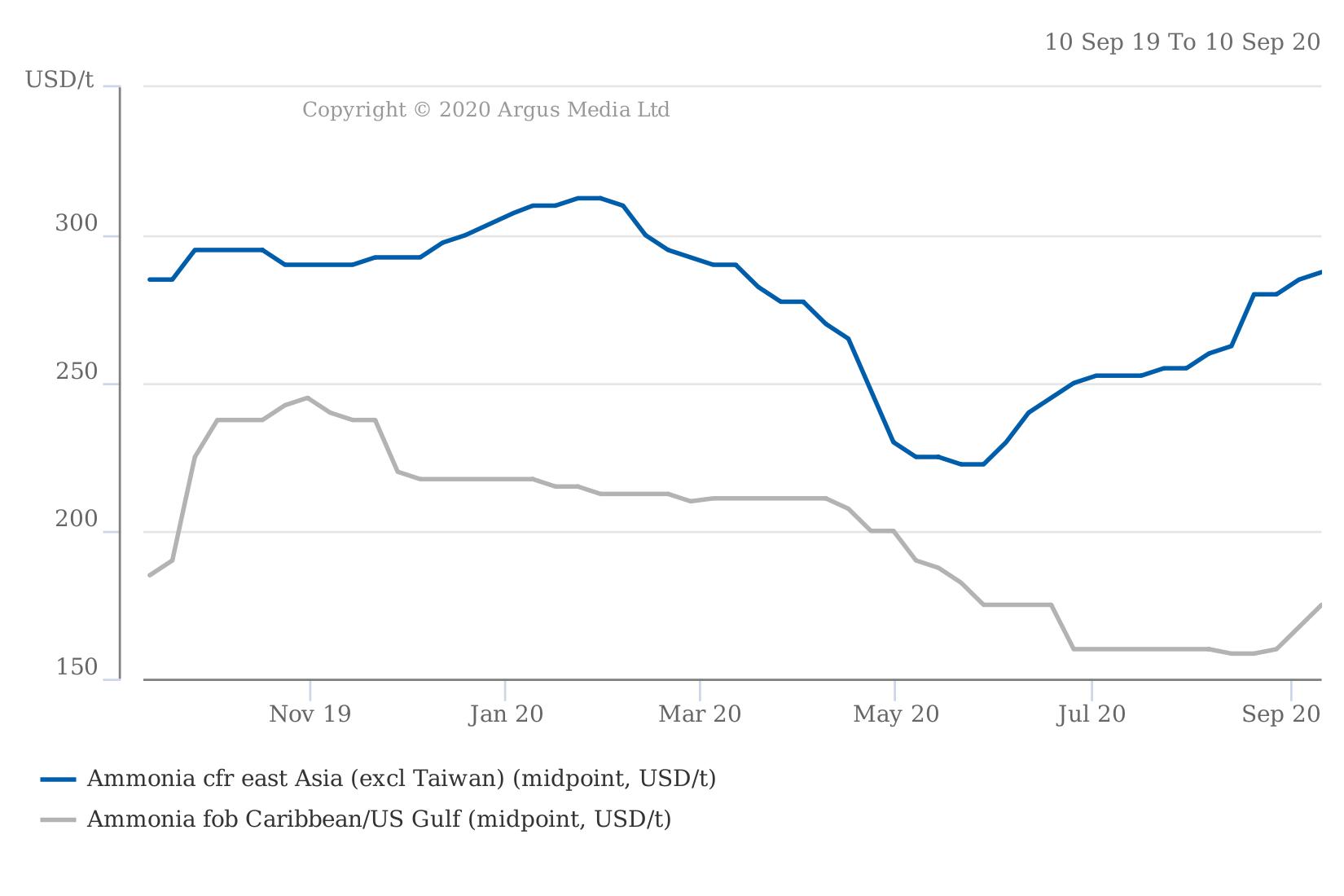 As supply tightness gripped the east Asian market in July, delivered prices firmed quickly, creating a potential arbitrage opportunity between the Americas and east Asia. But the opportunity has not been pursued in earnest thus far by Trinidadian producers, with just one US Gulf cargo and one US West Coast cargo making the voyage to South Korea and Taiwan. Most recently Russian ammonia was secured to ship to South Korea, proving a more favourable option than shipping a lower-priced cargo from Trinidad. Shipping between Trinidad and east Asia is an expensive and time-consuming voyage to undertake and it appears shippers would rather keep vessels working nearby markets than risking high logistical costs on one voyage, with any unscheduled delays cancelling out the potential margin.

Overall producers have had to reduce operating rates to cope with the slowdown in demand this year. Trade data from the Trinidadian energy ministry shows that exports are running around 15pc lower this year. January-July exports are 2.3mn t, down from 2.7mn t in the same period of 2019.


Three Trinidadian plants remain idle in September and are not expected back on line until there is a further increase in prices. Nutrien was the first producer to idle some of its production and took the decision when Tampa cfr prices dropped from $250/t cfr to $235/t cfr in April this year. The latest September Tampa contract price only made a small increase of $7/t on the month to settle at $212/t cfr. This suggests that prices will need to increase by at least $38/t to drive the idle production back on line.

One of the key factors weighing on Trinidad pricing over recent years has been the slowdown in US import demand, as the country installed its own capacity to take advantage of cheaper gas. US imports are running 11pc lower on the year in 2020, totalling 871,000t in January to August this year. Imports into Tampa are down steeply by 32pc on the year to just 220,000t in the eight-month period. This has in turn lead to more Trinidadian ammonia being directed on longer-haul shipments to Morocco, France, Belgium, Turkey and Brazil.

Overall, Trinidadian ammonia producers are having to compete more aggressively on pricing with each other, and with other producers in Russia and southeast Asia, to secure business for contract tonnes in 2021. The global market has been struggling with oversupply for nearly two years, and Trinidadian producers appear to have been suffering the most acutely with the lower-price environment. The timing of any potential price recovery and whether or not it can be sustained may prove pivotal to how much capacity producers plan to keep on line into 2021.

Where did all the crushed lump sulphur go?

Argus view of the potash market in volatile times

Tune into our latest fertilizer podcast, this time focusing on how the global potash market has responded to Covid-19 with a spotlight on the Americas, China and India.

Podcast: Impact of Coronavirus on the African fertilizer market