Jeff Kralowetz: Hello everybody, and welcome to The Crude Report, which is Argus' podcast series on global crude oil markets. I'm Jeff Kralowetz and I do business development for crude in North America, and I'm joined today by Vanessa Viola, our Senior Vice-President for Latin America and who also served as a former head of our business unit in Brazil. So lots of first-hand knowledge. Hi, Vanessa.

Jeff: So maybe I'll just set us up here, Vanessa, and then we can get to what's going on with Brazil and China. Many of us have noticed the amazing numbers on Chinese crude imports and demand this year, which stayed fairly strong even during the depths of the Covid-19 lockdowns in May and April. Chinese crude imports are up by over a million barrels a day so far this year and a growing portion of that has come from Brazil. And that was specifically light crude from the offshore pre-salt fields.

Chinese imports of Brazilian crude hit a record of 1.2mn b/d in June and stayed above 1mn b/d in July. But now, we're seeing a big pull back in terms of Chinese demand, and of course, Brazilian producers are highly exposed to that. 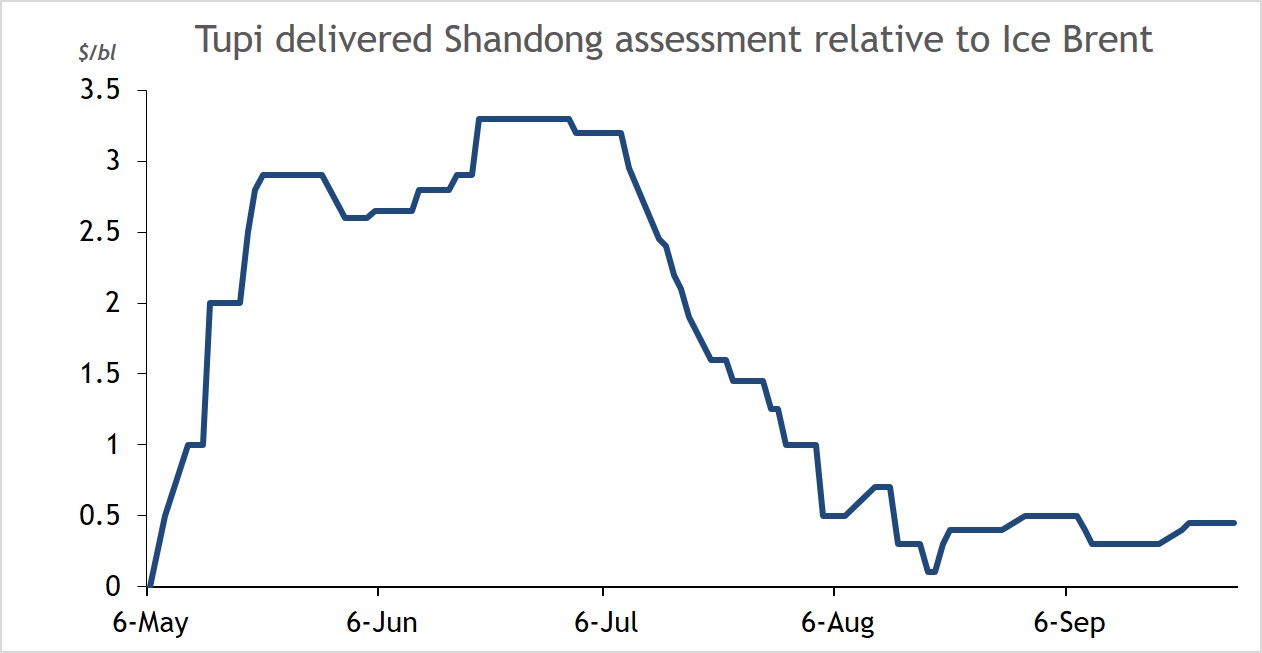 So this demand fall is showing up in the price of Brazil's main crude export stream Tupi, which until recently was known as Lula. The price of Tupi, which Argus assesses at the point where it delivers to the independent refining center of Shandong on the Chinese east coast has fallen to near parity with Ice Brent this month. It would almost certainly have fallen more but for the big decline in exports this month caused by petrol prices offshore maintenance.

So Vanessa, maybe we should start by asking, what's been going on with demand in China to cause the record crude import numbers and the more recent fall in the price of Tupi in China?

Vanessa: Sure. Well, I think, firstly, we need to remind ourselves why demand shot up so high because that rally really contained the seeds of its own demise. China's government kept the price which Chinese drivers pay at the pump for gasoline and diesel using a cost-plus mechanism derived from a basket of future prices. That basket price, which is Brent, DME Oman, and Nymex WTI, collapsed earlier this year. But Beijing stopped adjusting pump prices in line with the cost of crude when its basket price fell below $40/bl between mid-March and early July. So there was this long, long period in the second quarter when crude was very cheap and product prices were relatively high and refiners were making money hand over fist.

Chinese refining margins on paper were $10/bl in March and $15/bl in April. That's a very high refining margin. If you look at a major like BP, their refining margin in the second quarter was just $5.9/bl. And that meant that Chinese refiners could afford to pay more for crude than their competitors, and that obviously drew barrels east.

Vanessa: Well, the independent refiners typically operate with small scale plants but there are as many as 70 of them in the Shandong province alone. And they actually had the best margins of all. State-owned firms like, you know, the oil giants – PetroChina and Sinopec – they had to pay a windfall tax for the period that when prices were frozen. Independent refiners did not.

And the independents are the major consumers of Brazilian crude. They love Tupi; it's a base load for them, but they also buy Búzios, Sapinhoá, Mero, Sururu, Iracema, and they buy crude around 90 days ahead of delivery so they bought spectacular amounts of Brazilian pre-salt crude in the second quarter for delivery in the third quarter. And they bought so much, in fact, that the total deliveries in those months vastly overwhelmed available port unloading capacity, and a lot of that crude is still waiting to unload.

Jeff: So those overloaded ports in the backup of cargo ships, that's causing a problem for Brazilian crude to China.

Vanessa: Oh, yes. The ports literally, physically could not take any more in June, July. And the unloading delays meant that a lot of those cargos were still discharging in August and September. Crude waiting offshore has calmed down a lot now. But at the end of June, our friends at Vortexa estimate there was around 80mn bl of crude waiting to unload off China. That's a lot.

Another problem has been the quota system that China's government gives to private sector refiners which allows them to import crude. The import market only opened up in 2016. Until then, independents were not allowed to import crude and the huge amounts that they bought for delivery in June, July meant that many of them effectively exhausted what remained of this year's import allowances. So that doesn't make it impossible to import crude but it does make it more expensive. There's an additional charge to borrow someone else's quota to clear imports through customs.

But China suffered devastating floods in July. All along the Yangtze River, the longest river in Asia which basically runs from Tibet all the way to Shanghai, China experienced its worst floods in decades. And that, obviously, hit fuel demand. People couldn't drive, construction works stopped, refiners fuel sales backed up and clean product storage tanks filled to bursting.

The flood waters have receded now and demand is actually pretty strong. Gasoline stations are up on a year earlier. But refiners still have that hefty product stock overhang to clear and they also have to clear the huge amount of crude still in storage.

Jeff: So given all that, Vanessa, how would you rate the chances for crude demand and recovery in China going forward?

Vanessa: That's a very good question. So demand is weak now but we think it is going to recover. And we think it's going to recover quite strongly. China's government has pulled out all the stops to kick start its economy after Covid-19, which they have pretty much under control thanks to stringent quarantine measures.

China is expected to be the only major economy to record an expansion of GDP this year and growth will accelerate next year. So the oil demand exists. It's just that it's currently being met from storage. But stocks are clearing, and then pretty soon independent refineries will begin looking for crude for delivery in January which will be covered under the fresh batch of import quotas.

Last year, January trade started in October. This year, we expect bit of a delay because of the stock level issue. But there has been a real drop in imports which will mean that at least stocks are not still growing. And by late October or early November, we would expect to see the fresh demand coming through, which is good news for Brazilian and other crude producers that typically export to China.

Jeff: Well, thanks so much, Vanessa. This is really underlining for me how you have to know some of the nuances of Chinese demand just to have a good handle on how much Brazilian or even US crude is going to flow there. The Chinese GDP number alone, which a lot of people use as a metric, doesn't tell the whole story on demand there.

So thanks so much for explaining this and thanks to all of you for joining us. You can find our Tupi price on our Argus Crude service. And for more information about that service, please go to www.argusmedia.com. And of course, we hope you'll join us for the next episode of The Crude Report.

Saudi Aramco announced its official prices for October-loading crude exports last week, and this episode discusses the impact of these prices on the Asian market.

Covid-19 and its related demand destruction has challenged the Canadian oil sands sector with losses, but producers have been well-prepared for turbulence after overcoming previous challenges.